Phnom Penh police chief Lieutenant General Sar Thet yesterday warned traffic police officers, saying those who do not follow guidelines when enforcing the law or themselves flout traffic rules will be disciplined.

He gave the warning during a meeting with traffic police officers from all 14 districts at the municipal police headquarters.

“During the implementation to tighten up the traffic law, any officer who carries out work contrary to the instructions of the leaders will be punished and disciplined in accordance of the law,” he said.

In spite of the warning Lt Gen Thet praised the officers for their efforts both day and night to monitor motorists and strictly implement the Road Traffic Law to protect the lives and properties of the people.

He said within 13 days of tightening up the law, traffic accidents have been reduced by 40 percent, especially with most drivers now obeying the law by wearing crash helmet, seatbelts and following traffic lights and signs.

Lt Gen Thet advised all law enforcement officers to be highly patient, behave appropriately and be polite with the people while carrying out their work. 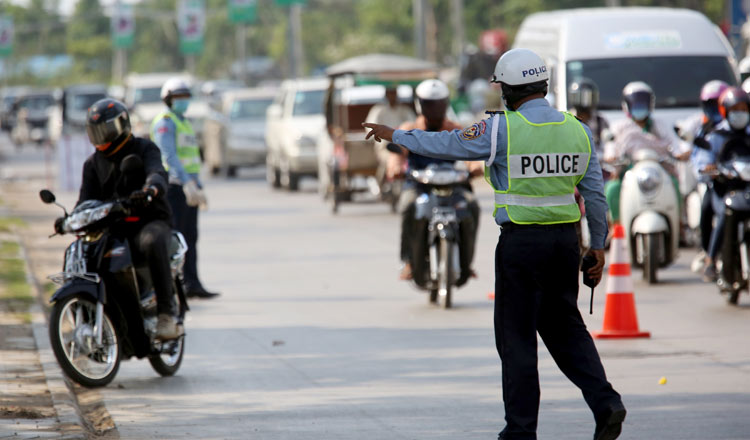 He added all officers must also show a good example for people by obeying traffic laws, wearing crash helmets and seatbelts, having vehicle registration plates, and not talking on the phone while driving (except when using earphones).

“Any officer who fails to obey the traffic regulations will be punished according to the law, the same as civilians,” Lt Gen Thet said.

Early this month in Svay Rieng province, Chantrea district deputy police chief Sour Thy was temporarily suspended from work after he handcuffed a villager who had no driver’s licence, which is in total disregard for regulations.

Institute for Road Safety director Kong Ratanak said yesterday he supports action against law enforcement officers who carry out their work improperly, but said the public should be informed of action taken against any errant police officer.

“In the past, when officers made mistakes or were disciplined, it was not made known to the public, which has created mistrust among citizens,” he said. “I think it’s good they [the National Police] have internal principles to strengthen the work of subordinate officers, but if possible, I ask for transparency altogether.”

According to a National Police report, during the implementation to tighten up the road traffic law through hefty fines from May 1 to Wednesday, traffic police officers fined owners of 21,369 vehicles, including 15,910 motorcycles and 5,459 cars.

The most notable offences among motorcyclists were not wearing crash helmets, not displaying licence plates and ignoring traffic signs.

For cars owners, offences included going over the speed limit, driving without seat belts, not having a driver’s licence and using mobile phones while driving.

The report said during the same period, there were 85 traffic accidents with 45 deaths and 115 injuries.

No Covid, no Sokha trial

Former refugee runs for political office in US