Sitting in a clear room in Sovannaphum Art Association, its director Mann Kosal looked around the theatre where he used to work for 26 years until it closed recently.

With a wry smile, Mr Kosal says: “We are going to be closed from now on.”

The 60-year-old Sbek Thom master takes a deep breath before continuing to explain the reason behind the closure: “The association is running out of funds to support its operations, including the rent, which is a huge sum.”

He adds that although there was some help coming from one way or another, it was not enough to sustain operations without audience support. 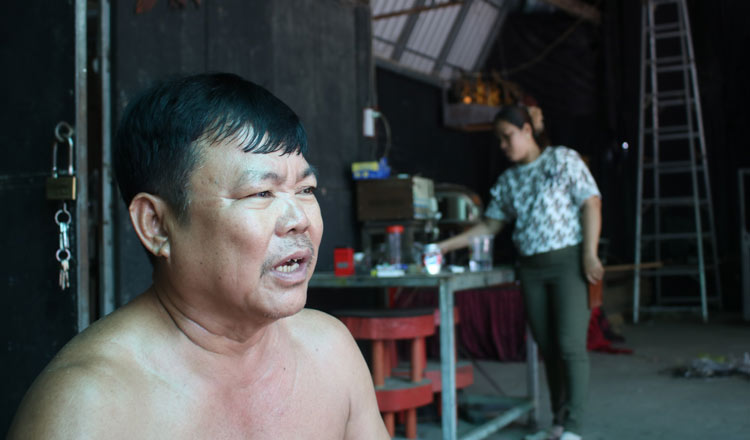 “Close to $1,000 is spent every month for the whole operation. The income generating tool of the association comes from the Sbek Thom performance and sale of Sbek Thom puppets made by me and other three experts,” Mr Kosal says.

He says the associations had faced financial crisis several times over the years but he managed to stay afloat with help.

However, since the beginning of this year when the COVID-19 pandemic hit, the number of visitors kept dwindling. This made funding the operations harder and harder each day.

Performances had to be cancelled due to lack of visitors and not many foreigners came by to buy puppets.

Mr Kosal says if he has money even for the rental he will keep operating the association but he does not despite the landlady offering a 60 percent discount.

“I’m 60 years old already, I really don’t want to get old with debt just like the Khmer saying that ‘it’s better to be poor with no debt’” he adds.

Mr Kosal says that in the wake of the closure, the three professional puppet makers at the association are also facing an uncertain future.

As for himself, he says he is considering a short trip to his home in Takeo province before planning for the future.

Sbek Thom is an ancient form of shadow theatre in Cambodia. It is a Khmer traditional performing art which has gained recognition from Unesco in 2005 as a Masterpiece of the Oral and Intangible Heritage of Humanity. The Sbek Thom performs the story of the Reamker, the Khmer version of the Ramayana. More than 100 single puppets are made for the performance.

Despite the great achievement of becoming listed by Unesco, people in the Kingdom have not taken Sbek Thom up to form up more troupes.

Sovannaphum is among six remaining troupes in the Kingdom, according to a book on Sbek Thom which is accessible at Unesco’s digital library, UNESDOC.

Sovannphum Art Association opened in 1994 and its musical instruments, screens and puppets have become much sought items for buyers.

Asked if he will reopen the association, Mr Kosal says: “Once it’s closed, it will be forever closes as it’s not easy to reopen. The puppets need to be given away because I cannot afford to store them anywhere.”

“It will take at least five to six years to make over 100 new puppets for the theatre performances again,” he adds.

Mr Kosal says some people have asked to buy all the Sbek Thom instruments from Sovannphum for up to $10,000, but he has rejected their offers.

“I don’t want to sell them because I’m afraid they will be exported and Khmer people won’t be able to benefit from their own cultural art. So I have decides to donate them to a fine arts school,” he adds.

All property of Sovannaphum Arts Association, including more than 100 puppets will be donated to the Secondary School of Fine Arts in Phnom Penh to preserve the memory of the 26-year-old association.

Morn Chear: Artwork and the courage to go on in life