Home - To the Realm of the Masks

To the Realm of the Masks

Lakhon Khol Wat Svay Andet, a form of Khmer masked drama dance, was inducted by UNESCO into its List of Intangible Cultural Heritage in Need of Urgent Safeguarding in 2018.

Nevertheless, not too many know about the Buddhist monastery, located just about 10 km east of Phnom Penh and surrounded by a small community, this performing art has been practised and taught for generations. Taing Rinith goes to Wat Svay Andet Pagoda and meets with a group of artists who are keeping their noses to the grindstone to preserve the mask theatre.

From Monday to Friday, Noeun Veasna, 21, leaves his house in Ta Skor Village, Kandal, early in the morning and boards one of the double-end ferry at Arey Ksat for Phnom Penh so that he can be on time for the lecture at the National Technical Training Institute, where he is studying to become an electrical engineer. On Saturdays, he usually buries himself in his books and assignments.

On Sunday, however, Veasna does something very different. He looks forward to this say for the whole week. In the morning, instead of heading to the ferry port or keep himself busy at his desk, he drives at Wat Svay Andet pagoda, just a few kilometres from his house, to assist a few Lakhon Khol masters in passing their endemic art to the younger generations, as well as to learn it from them himself.

“I started learning Lakhon Khol seven years ago because my grandfather, my father, and my brother are all Lakhon Khol artist,” Veasna says. “Yet, I also love it. I may become a full-time engineer in the future, but I will keep practising the art form.”

On a Sunday morning, when Veasna arrives at the pagoda, about 20 students, all boys aged between 5 and 14, are already there, playing tags or eating the mangoes they have picked from the trees near a centuries-old Buddhist temple. Veasna brings them together at a theatre near the entrance of the monastery and orders them to practise what they had learned the previous Sunday until the masters arrive.

Afterwards, he begins his 4-hour training session on his role as Preah Ream (Rama), the central character in Reamker, a Cambodian epic poem based on Sanskrit’s Ramayana epic.

“I used to perform as an ogre general, but just last year my master told me I was good enough to play the main character,” Veasna tells Good Times2 during his break.

The students are divided into three groups, based on the characters in the mythical story which inspires this drama dance, and each of them is under the supervision of one master. The first group, who perform the role of the monkey soldiers, have to jump and roll around and fight with wooden daggers. 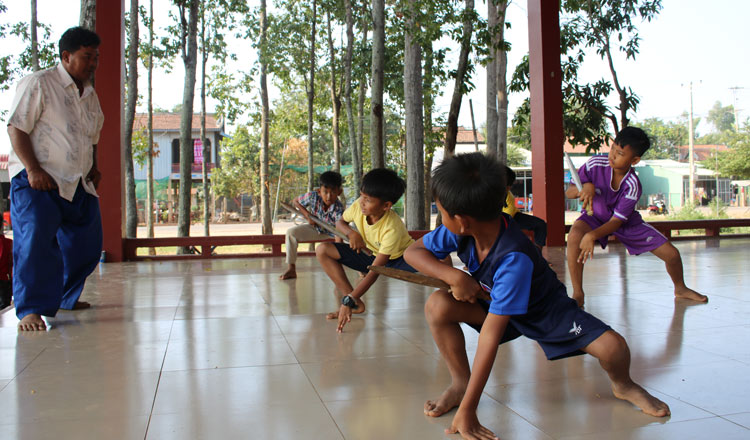 The second group, the yak or ogre warriors, have been trained to dance gracefully while using long rods as weapon props. The last group, called neay rong, is made up of important characters in the epic, including white monkey king Hanuman, Preah Ream (Rama), Preah Leak (Lakshmana, also known as Rama’s younger brother) Seda (Sita) Krong Reap (Ravana), and so on.

“As a rule, each student’s physique has to be examined before deciding on which role they play,” says Heng Sao, who at the age of 72 was the oldest master of Lakhon Khol Wat Svay Andet Troupe.

“The ones who perform the role as monkeys have to be small in size and fast while the ogre performers have to be tall and have a very flexible body.”

While art historians believed that Lakhon Khol has been performed since the Angkor period (802 AD-1431 AD), Sao says Lakhon Khol has been the “soul and identity” of the communities that surrounded Wat Svay Andet Pagoda for generations – so long that nothing has been known about its origin.

Sao explains that Lakhon Khol Wat Svay Andet contains some postures which do not exist in other contemporary Lakhon Khol, which is performed in Phnom Penh and other parts of Cambodia, or in the similar Khon theatre of Thailand. Another difference, he says, is that the dancers in the roles of Preah Ream and Preak Leak wear crowns instead of masks.

“Lakhon Khol Wat Svay Andet is the most original form of the drama dance and thus represents Lakhon Khol all over the country, although it is being taught only at Wat Svay Andet pagoda today,” Sao says. “Before 1975, Lakhon Khol was not only taught at the pagoda but also in the families.

The Fall, the Revival and the Struggle When the Khmer Rouge came into power in 1975 and started ruling the country ruthlessly, a calamity fell on Lakhon Khol Wat Svay Adet, just like all other forms of art at that time. Most of the masters and artists were considered as the enemies of the “revolution” and were killed by Khmer Rouge cadres or died from starvation, diseases and forced labour. During this “dark age”, Wat Svay Andet pagoda, where Lakhon Khol had been practised for hundreds of years, was turned into a Khmer Rouge prison and an execution site.

After the fall of the Khmer Rouge in 1979, seven surviving masters and a few artists restored the pagoda as the heart of their art-loving community and resumed their teaching to revive their signature drama dance. One of the main purposes behind the revival was to resume and continue giving the annual Lakhon Khol performance at the pagoda on the first Saturday after Khmer New Year, a tradition which has been carried on by the community for centuries. It has been believed to bring happiness and good fortune to the people, who really needed it at that time after four years of unbearable suffering.

Poch Phai, a retired school principal and the Chairman of Lakhon Khol Wat Svay Andet Committee, says for years his troupe has faced great struggles in preserving the community’s Lakhon Khol, considered mission impossible by many, amid the lack of equipment, financial support and students. However, their condition has improved significantly in recent years, receiving huge public attention on social media and even inducted in List of Intangible Cultural Heritage in Need of Urgent Safeguarding by UNESCO last year.

“We used to rehearse on the open area of the pagoda’s compound and had to rent a stage whenever we gave a performance, but now we have a big theatre where we can both rehearse and give performances,” Phai says. 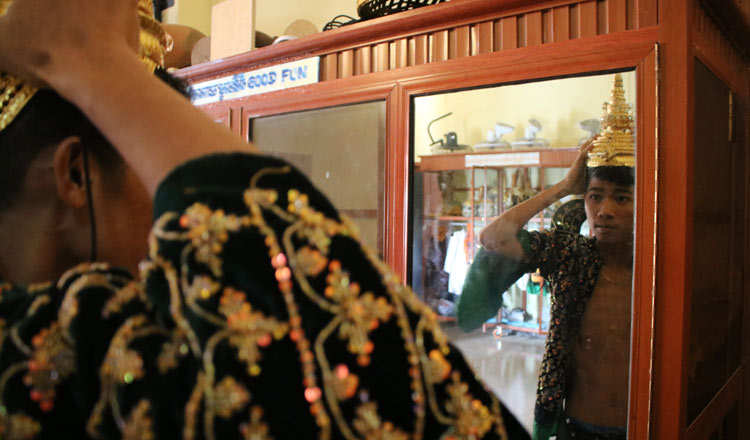 “With equipment and costumes given to us by UNESCO and the Ministry of Fine Arts, the number of artists and students have risen from around 20 to nearly 50.”

Nevertheless, financial challenges are still faced by the Lakhon Khol Wat Svay Adet Troupe, according to Phai. Although the troupe has been asked by companies and institutions to gives performances at their events, Phai could not agree to all of them because all artists are full-time students, workers or farmers, who only have Sunday to spare.

So far, the troupe’s main sponsor has been the abbot of Svay Adet pagoda. Meanwhile, the masters have not been paid for their teaching; instead, they usually have to pay for the students’ food and drinks during the training out of their own pockets.

“For now, we are confident that our Lakhon Khol would not be lost,” Phai says. “But, for that to continue, we need money to pay our masters to encourage them to continue teaching and for the students’ snacks and drinks.”

Of all the students, Lim Saomonin, 14, is one of the few who wants to become a professional Lakhon Khol artist. Although his father, a farmer who loves the performing art, asked him to learn it, Saomonin is doing it with a genuine passion.

“In the last performance, I earned $10, which is a lot of money,” he says, smiling. “I want to be famous and teach Lakhon Khol Wat Svay Andet to the younger generation, not only here but all over Cambodia.”

Get the chance to study at Harvard, Stanford or MIT all for free, online course during Covid19