From selling clothes to cosmetics, e-commerce has quickly become the go-to money-making venture in the Kingdom. The improvement in internet access and innovations in smartphone technology has opened doors for Cambodians to advertise their products and services on social media. Unfortunately, the growth of online retail has welcomed some unexpected visitors, with the entry of the oldest profession in the world: prostitution.

Last week, in a Facebook group with some 80,000 members, a female member posted a picture of herself, scantily dressed, with her face carefully hidden behind a smiley emoticon. “Who wants to have a good time?” she wrote in Khmer. “I need money. Send me a private message now. For those in Phnom Penh only,” she said, not bothering to hide the innuendo behind her invitation.

Unsurprisingly, her post turned the heads of many of the male members, as they wrote comments asking about her charges. With the intent of getting more details about the attention-grabbing business, I sent her a private message and set an appointment under the guise of interest.

“It will cost you $35 an hour. If you’re willing, you can come to my apartment in Tuol Kork [district],” she replied. Her apartment building is located in the poorer part of the district.

She greeted me with warmth as soon as she opened the door. Not five minutes in, she asked me to take my clothes off. She said I needed to hurry because she had another client coming by.

Not wanting to bare my body to a stranger, I came clean and told her I was a journalist who came with the intent of interviewing her. She refused at first, as I expected, but eventually agreed under two conditions: first, questions about her past were off-limits and second, I had to pay for her time.

She wanted to be called Lily.

Lily used to stand along the streets of Wat Phnom, waiting for a client to approach her and whisk her away to a nondescript motel. With her are other women also hoping to grab the attention of a moneyed man looking for immediate gratification. Her profession earned her about $500 a month although a third of it went to her pimp, whom she said “protects” her.

“At Wat Phnom, I was constantly worried about police raids. It was also very difficult to get a client,” she said.

The anxiety from the risks of being exposed to a sudden arrest took a toll on Lily. So, when a friend suggested she bring her business online, she didn’t hesitate to follow through. The move proved fruitful as she earned up to $2,000 a month – significantly higher than what she used to earn.

“All I had to do was create a page where I constantly posted my pictures for the clients to see,” she said. “Men are always looking for our services.”

The men she serviced always came in different garbs. Some of them were young and in high school uniforms, while others were ageing wearing Hawaiian shirts. Most of them were too shy to go to brothels, afraid someone would recognise them.

“Of course, I am not proud of what I’m doing but this is a business,” she said. “I am a working girl.”

Thida is another Phnom Penh-based sex worker who relies on Facebook and Bigo Live, a popular live video-streaming app, to make a living. A divorced mother of two who also supports her elderly mother, Thida struggles to make ends meet despite earning about $600 a month.

“This apps help me a lot. They offer functions which enhance your appearance, like making your skin fairer,” she said. “Men are only interested in physical features.”

“Not all men who message me want my service. Some of them are lonely men who simply want to talk about sex because they cannot afford my fee. Of course, there are also weird ones who send me pictures of their private parts and ask me to have sex with them for free,” Thida noted. 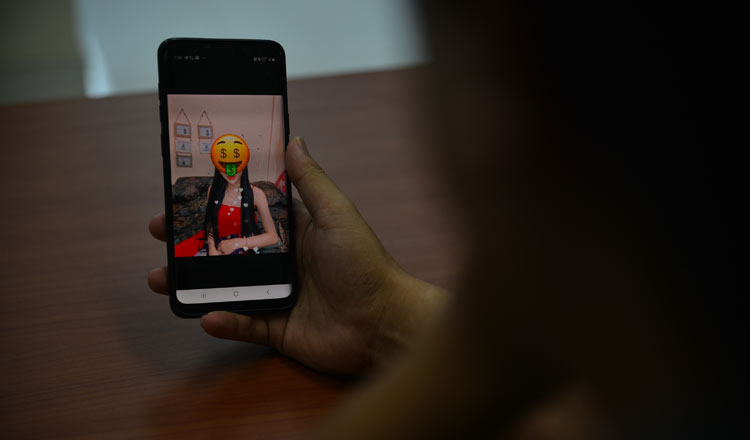 The plight of sex workers

Despite the money they make, both Thida and Lily, as well as most sex workers, recognise the risks their profession poses. Having to deal with strangers every day, none of them knows what kind of client they could run into.

“Once, a man paid me $150 to spend a whole night with him in his apartment,” said one of them. “When I got there, six men were waiting for me. They would not let me go unless I have sex with all of them. I had no choice. The only luck I had was they all used condoms.”

Despite the rape and abuse both had gone through, the two women know they cannot ask for police assistance without being at risk of being arrested as well, having a profession which is illicit in the country.

Despite being banned, prostitution in the Kingdom remains prevalent. A 2016 UN report disclosed around 34,000 prostitutes work in Cambodia, many of whom are Vietnamese.

The Law on Suppression of Human Trafficking and Sexual Exploitation, which was enacted in 2008, punishes everyone involved in prostitution, from the procurers and brothel owners to the sex workers themselves.

Ros Sopheap, executive director of Gender and Development of Cambodia, said the criminalisation of prostitution only further victimises the sex worker.

“I called for the legalisation of prostitution in Cambodia because it is the only way to make it safe for the workers and protect them from all kinds of abuse,” said Ms Sopheap.

“The provision of sexual services has been seen as something going against the social norms and values expected from Khmer women. But [prostitution] is a trade business between two adults – a concept yet to be accepted by the public and the government,” she said.

Meanwhile, con artists have taken advantage of online prostitution at the expense of unsuspecting men. According to the victims, some swindlers, pretending to be sex workers or pimps, trick the men into paying first through mobile banking apps before they could “avail” the service. They then run away with the money, leaving the victims penniless and unsatisfied.

“Once, when I caught a swindler who did that, he threatened to send screenshots of our Facebook conversations to my wife, whom he found through my account,” said a male victim who asked to be anonymous.

Ms Sopheap argued legalisation and regulation of prostitution are needed to control sex trade in Cambodia. “Otherwise, both the worker and the client will suffer,” she said.

Vox pop: How people in the capital are responding to COVID-19

About 3,000 garment workers screened for COVID-19