The European Branded Clothing Alliance has asked the European Union (EU) to postpone withdrawing tariff preferences granted to Cambodia under the EU’s Everything but Arms (EBA) trade scheme.

countries are “severely impacting… developments, jobs and growth,” he said.

Yesterday the Garment Manucturers  Association in Cambodia said about 60 percent of its factories had been severely affected by cancelled orders  of ready-made garment exports because of the COVID-19 pandemic. It wasn’t clear what the monetary cost would be but it is expected to be significant and affect thousands of workers and their families.

“We do know that the bulk of these cancelled orders have come from both the US and EU markets, which represent 28 percent and 46 percent  of our export market respectively,” said Ken Loo, scretary-general of the Garment Manufacturers association of Cambodia.

“If we do a calculation on these two figures, we reach a 74 percent out of the approximate 750,000 workforce in the garment sector. This equates to around 500,000 workers that have been affected by these cancellations,” Ken added, plus those dependent on them.

In 2019. Cambodia garments and footwear were valued at about $8.1 billion, representing a year-on-year increase of  11 percent, according to a report from the Ministry of Industry, Science, Technology and Innovation.

Sierra requested seven support measures from the EU and member countries “to enhance certainty and allow us to keep on supporting our employees in the EU, as well as the workers in the manufacturing countries.”

The measures include a request to the EU to “postpone the withdrawal of the EBA status of Cambodia because of the exceptional circumstances and already severely impacted global industry.” 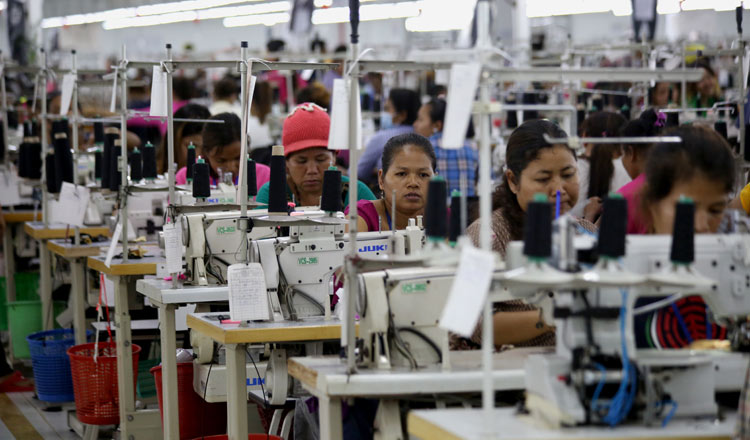 The European Commission persuaded the EU to withdraw part of its preferences for Cambodia on Feb 12, claiming “systematic violations” of human rights.

The withdrawal would affect selected garment and footwear products as well as all travel goods and sugar. It represents about €1.1 billion  (20 percent) of Cambodia’s annual exports to the EU.

The withdrawal will take effect on Aug 12 unless a last-minute change of heart occurs.

Sierra said sales in the EU’s branded clothing sector had already dropped by about 90 percent as a result of disruptions caused by COVID-19.

A similar percentage of employees are now being supported financially by their employers, in addition to state support, to avoid losing their jobs.

“Such a sharp decline in sales has an inevitable impact on orders,” Sierra said.

He said Bangladesh had estimated lost orders at €1.5 billion, affecting 1.2 million workers. But unemployment among workers employed both by clothing brands and suppliers could swell to 4.1 million.

The letter noted that the clothing industry had previously led to “massive job creation and capital investments” in manufacturing countries. “As production and exports of clothing have increased, poverty rates have declined,” it said, adding that branded clothing companies had also undertaken social and environmental initiatives.

“The road to recovery will be lengthy,” Sierra warned.

“In the meantime, we, as branded clothing companies, wish to contribute where possible in this crisis by using our sourcing and manufacturing capacity and supply chain to produce personal protective equipment and use global networks to deliver them to hospitals as soon as possible.”

Tourism ‘to take longer to recover from pandemic than other sectors’