Prime Minister Hun Sen said yesterday that the declaring of a state of emergency may not be necessary as the COVID-19 situation in the Kingdom is under control.

The emergency draft law is now being worked on by the National Assembly.

Speaking to a group of reporters during a press conference at the Peace Palace in Phnom Penh yesterday, Mr Hun Sen said a state of emergency would not be declared even if the draft is passed but the government still needs it if the situation gets out of control.

“I think the possibility of declaring a state of emergency is 0.1 per cent over COVID-19,” he said. “Meaning the possibility is less, [but] despite this we still need a legal tool in our hand.” 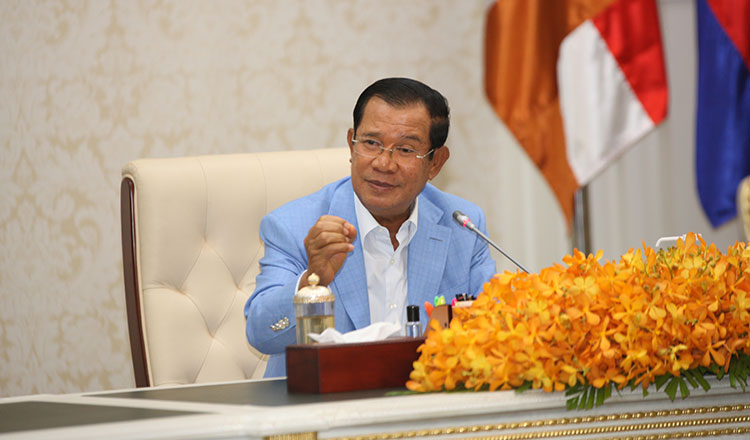 He said based on the draft law, the “State of Emergency” will be for a maximum period of three months each time and can be renewed for as long as necessary.

The draft law was sent directly to National Assembly for approval without having to go through the Council of Ministers.

National Assembly President Heng Samrin yesterday led a Permanent Committee to discuss the draft law which was received on Friday.

National Assembly Secretary  General Leng Peng Long said yesterday that after discussions, the committee decided to send the draft law to the Commission on Legislation and Justice and also the Commission on Interior, National Defence, and Civil Service Administration for them to jointly study it before reporting back to the committee.

Mr Hun Sen yesterday said the National Assembly will debate on the draft law during its plenary session on Friday. He said he hopes  the draft law will be adopted after the Khmer New Year celebrations.

To become law, the draft needs to pass through the National Assembly, Senate and Constitutional Council before being sent to King Norodom Sihamoni for final approval.

Mr Hun Sen noted the government does not want to see the prohibition or restriction of  people’s movement and rights or any serious impact on the economy due to the implementation of the “State of Emergency Law”.

He said only the King can put the country in a state of emergency after agreement with the Prime Minister and the Presidents of the National Assembly and the Senate.

When asked if the government would put the country under a state of emergency in situations besides the COVID-19, Mr Hun Sen said the law applies to any “out of control” situation.

“If the situation in the country is out of control and no one obeys regulations, we will declare it. No need to wonder,” he said.

Mr Hun Sen said the government cannot place a curfew without a specific law and advised people not to travel if not necessary to avoid getting COVID-19.

“The government needs a legal tool in hand, if they do not listen to such advice, we will declare it. Then, we will impose a curfew from 8pm to 5am. They must respect it. If not, they will be punished,” he said. “In the Philippines, the president has ordered for people to be shot if they violate lockdown measures.”

Mr Hun Sen said the “State of emergency” could be implemented for the whole country or only some part of the country where the situation is getting worse.

Under the newly-drafted law, the government may delegate authority to the armed forces to ensure its implementation once a declaration of emergency is made.

Rights groups have called on the government to withdraw the draft law, saying it would empower Mr Hun Sen to override fundamental human rights protections.

They noted the law would allow the government to restrict all civil and political liberties and target human rights, democracy, and media groups.

Justice Ministry spokesman Chin Malin said the government had studied the law’s mechanism, theory and principles of regional and international human rights consistent with Cambodia’s context before the draft was sent to the legislative body.

“The State of Emergency Law gives power to the executive body to take all necessary measures for the nation, including prohibiting or restricting the freedom of movement, the right to maintain public order and security,” he said.

Kin Phea, director-general of the International Relations Institute at the Royal Academy of Cambodia, yesterday agreed with Mr Hun Sen, saying the law could be applied only in the worst-case scenario.

“The State of Emergency Law is not only applied for COVID-19 case, but it was drafted during the situation of a pandemic outbreak,” he said. “Actually, all countries need such a law because an emergency may happen any time, which we cannot predict,”

“The possibility of putting the country in a ‘State of Emergency’ can be also related to war or foreign aggression, a public health emergency, as well as serious disasters that threaten or cause harm and spreads nationwide,” Mr Phea added.