Cambodia’s hopes it could outgrow Least-Developed Country (LDC) status by 2025 have suffered a major setback caused by the Coronavirus outbreak and the 20 percent loss in tariff-free trade with the European Union.

At the beginning of the year there were aspirations that if the country keeps its strong economic growth around 7 percent annually, boosted by the main sectors such as garments, agriculture, construction and tourism as well as burgeoning human resources it could even reach middle-income status by 2030.

Now, with uncertainty over finding a cure for COVID-19, the loss of about $1.1 billion suffered by the garment industry under the Everything but Arms deal with the EU that maintains human rights are abused and after many garment orders were cancelled in Cambodia, with some companies not paying for goods received, that optimism has disappeared.

He said the countries must meet two of the three criteria at two consecutive triennial reviews to be considered for graduation. 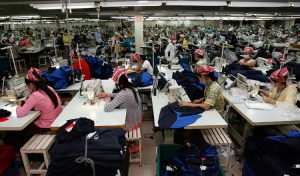 Prime Minister Hun Sen expressed optimism in that Cambodia is on track to make the middle income transition by 2030 and to achieve high income status by 2050.

Suzuki said for the future the labour-intensive export-oriented industries would be important for Cambodia. The industries with most potential are parts manufacturing for automobile and electronics, such as Minebea, Sumi and Yazaki.

“It would be necessary for the government to make efforts to attract these kinds of Japanese manufacturers investing in Cambodia, possibly shifting from neighbouring countries,” he said, adding that, for the longer term, the innovation industry would be an important target.

“Information technology (IT), financial technology and 5G have huge potential,” said Suzuki. “A good example is the digital currency Bakong, which was developed by the National Bank of Cambodia under cooperation with Japanese IT Company Soramitsu. Higher education and training, support for innovation and startups would be necessary.”

The World Bank and the Asian Development Bank (ADB) have predicted the Kingdom’s real economic growth will slow to around 2.5 percent and 2.3 percent respectively this year mainly because of the COVID-19 pandemic.

As a direct result of the COVID-19 pandemic there will be a significant global slowdown to major economies such as China, the US and the European Union, resulting in the reduction of Cambodia’s access to vital export markets, according to the ADB’s flagship annual economic publication titled, Asian Development Outlook 2020.

According to an earlier report by the United Nations Conference on Trade and Development (UNCTAD) it is projected that the number of LDCs will fall from 48 to 32 by 2025.

Hong Vannak, a business researcher at the Royal Academy of Cambodia, acknowledged that the Coronavirus pandemic and EBA cut would hurt the Kingdom’s economy.

“If there are no other obstacles and if we can extract oil as planned, we will be able to reach the goal, or we can graduate around 2027 or 2028,” he said. Hong added that after COVID-19 is overcome,  economic activity will recover faster than after the 2007/8 global financial crisis.

No sign of slowing sales of borey projects despite Coronavirus