Cashew nut growers feel the pinch as their price plunge

A representative of a cashew growing association has said that market prices for the fruit have dramatically decreased in the last fortnight, blaming border restrictions and a reduction in demand.

Oum Ourn, head of Sambo Prei Kuk Cashew Nut Association in Kampong Thom province, speaking to Khmer Times said that the 380 farming families that he represents are struggling to deal with a nearly 50-percent reduction in what they can sell cashew nuts for.

Oum explained that the farmers sell the cashew nuts to local middlemen traders who sell them on to Vietnam, but there is now an issue because of border closures between the two countries to prevent the spread of COVID-19.

This is despite Prime Minister Hun Sen’s statement last week claiming that it’s business as usual in terms of trade exchange along borders, with only travellers being stopped from moving between the two countries.

Whatever the full situation, Oum said that it is having a very real effect on his producers, who harvest cashew nuts through February and March.

“With the current price, farmers may not be able to survive. They are being forced to sell the fruit at a profit-less price,” he said, adding that the middlemen traders are in a better position because they can buy them at lower prices and store them for at least a year.

Compounding the issue is the fact that many of the farmers simply can’t afford to switch to another crop, such as cassava or rubber trees because of the expenses involved. 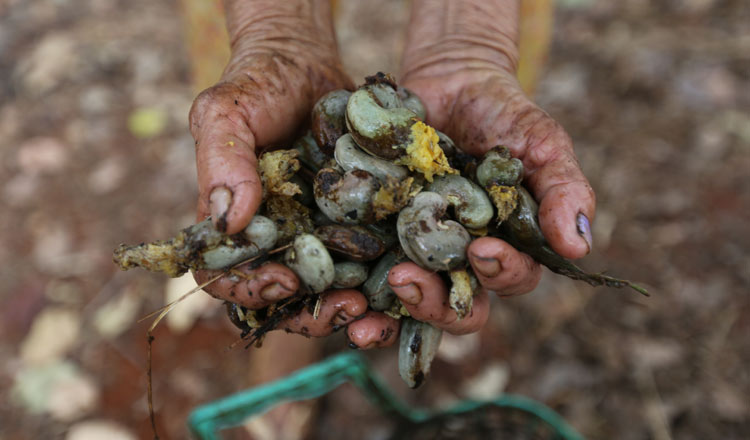 The General Department of Customs in Vietnam, which registers the amount of cashew nuts sold from Cambodia onto the Vietnamese market, reported that Vietnam exported 50,700 tonnes of the product the international market annually, and recorded a 6 percent increase during the first two months of this year.

However, the department said the average export price is around $7,000 per tonne, down 14 percent in comparison to last year. Meanwhile, the Vietnam Cashew Association has warned that the country’s cashew industry was expected to face difficulties in export during the first half 2020 because of the global pandemic and oversupply. This in turn will affect the Cambodian cashew nut farmers, with Oum saying that Vietnamese buyers have informed the association that they will be reducing the volumes of fruit they buy amid the uncertainty surrounding the continuing virus outbreak.

Figures from the Ministry of Agriculture, Forestry and Fisheries showed that Cambodia exported 66,071 tonnes of cashew nuts during the first two months of the year, with market destinations of Vietnam, Japan and Russia.

‘We have to eat’: Sicily police crack down on food looting