Central Siem Reap is undergoing a transformation, and leading the charge is the newly refurbished Aviary Hotel, which opened in 2015 as a 25-room “environmentally focused property.”

It has now expanded to a “43 room oasis,” which is quietly establishing a reputation, as last month The Australian newspaper noted, “The hotel has flown a bit under the radar in terms of international publicity, but word is getting out about its green credentials, pocket-friendly prices and almost unbeatable position in the town centre.”

The “new” Aviary Hotel now boasts far more than just more rooms and more pools. Additions include electricity-generating eco-gym bikes, papier-mache sculptures, different music in different areas of the hotel programmed by a French ex-pat DJ, a clutch of stylish boutique branded stores, a classy Japanese restaurant Fumizen (which is the first franchise outside Japan), and an amazing array of trees.

“We have planted loads of trees to remain like an oasis in town,” Aviary Hotel General Manager (GM), Joffrey Thin-Gris proclaims.

Joffrey started his career as an airline flight attendant in 1999, before leaving the airline industry in May 2005, and signing up with Shatec, the Singapore Hotel and Tourism Education Centre. He worked in recruitment, training and management for most of his time with Shatec, along with working in Cambodia with a string of local hospitality businesses.

In August 2008 he decided to stop training people to work in and run hotels and signed on to run a hotel himself as general manager of La Maison D’Angkor Hotel in Siem Reap. He then worked in a succession of hotels in Laos – as GM at Relais & Châteaux, pre-opening GM at Next Hotels and pre-opening project manager at Le Sen Hotel. In June 2013 he returned to Cambodia as GM of the Knai Bang Chatt in Kep, and in August 2015 he signed on as GM of the Aviary Hotel.

Many have asked how the Aviary Hotel got its name, and have been told that because the wealthy Cambodian owner, who Joffrey assiduously declines to identity, had studied in Australia. Where according to The Australian newspaper, he fell in love with birds and decided to open a hotel back in Cambodia with an “avian” theme. This story is told throughout the property via all sorts of bird décor, and café and bar names such as Flock, Plumage and Glide.The bird theme also neatly dovetails with the hotel’s accelerated eco aspirations. 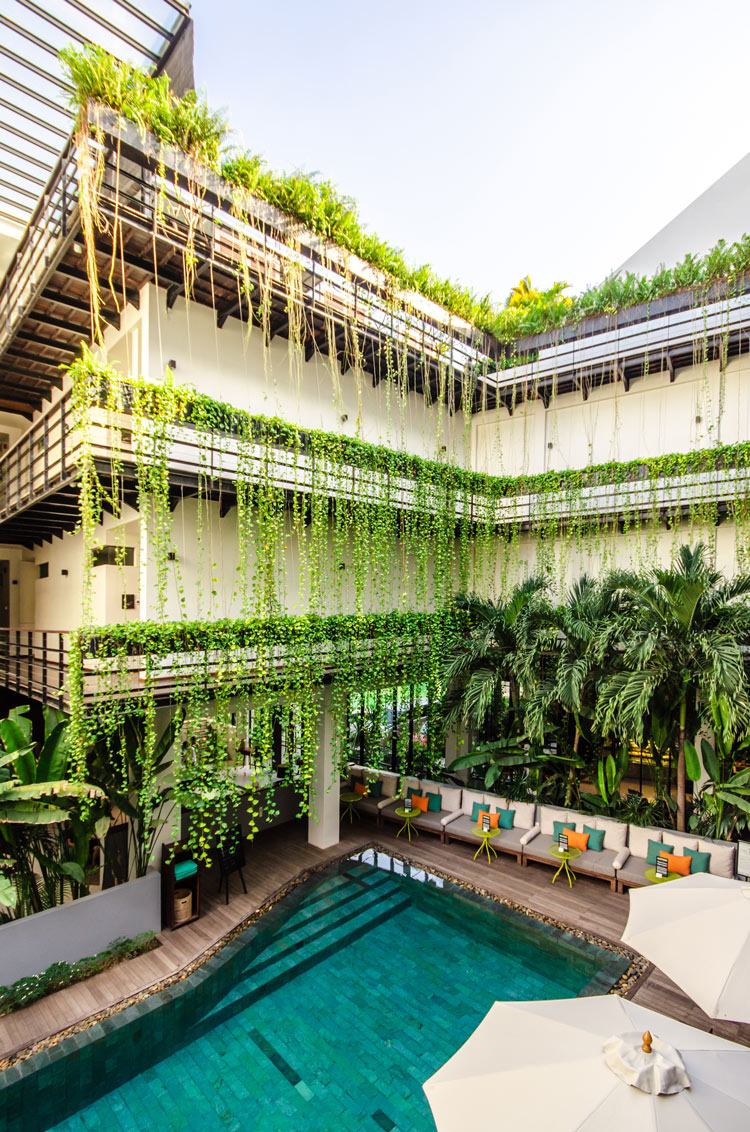 “Another step from us in being eco-friendly is in the eco-gym, which has just opened, all equipment will be producing self-made electricity,” says Joffrey. The gym is now fitted out with the latest technology that claims to harness up to 74 percent of human energy and converts it to utility-grade electricity. With one hour on an elliptical machine allegedly generating up to 160 watts of power. “Each workout will reduce your carbon footprint while lowering power consumption at your facility,” touts the website for ECO-POWR, the company behind the technology.

The hotel’s eco-friendly mission is reduce, reuse, recycle, and includes drinkable water filtered straight from the tap that is available throughout the hotel. “We have reduced a large amount of plastic by doing so, and the response from guests is amazing,” says Joffrey.

The hotel now not only looks good but also sounds good, with the previously stated programmed music by DJ Cecile Hines, who arrived in Cambodia in 2014 from the south of France where she was a musician as well as being horse trainer, teacher and professional massage therapist. In Siem Reap, she has been teaching French, training horses, and curating music for hotels.

“Designing music for a hotel is very interesting,” she says. “After all, memorable travels and stays are also linked with the atmosphere of the place that guest have chosen to stay. And nowadays playing good music incoherence to a hotel’s identity is as important as selecting pictures for a website.”

“As for The Aviary, the hotel itself is very inspiring, so I did not have any difficulty. All I needed was a few meetings with the general manager, and then once the direction was stated, I was free to create the mix of playlists I felt like,” she added.

For guests and Siem Reap residents in need of serious retail therapy, the Aviary now also features a bank of street-side boutique stores, as Joffrey notes, “All our shops have already been rented. We are extremely lucky to have Eric Raisina Couture House, Maison Sirivan Concept House, Paradise and Ambre. We could have not dreamt for better.”

The retailers themselves say the Aviary provides a retail opportunity that’s has been a dream. “We were Aviary guests before we became residents so it’s always been a special place,” says Peter Reid of Paradise. “The new addition is simply a stunning piece of architecture and design. The opportunity to open a boutique within its walls really piqued a nerve with us,” he said.

Ambre was also quick to choose the Aviary as the location for its new Siem Reap outlet. “The new Aviary space charmed us: its clean and rational architectural volume, the sunny brightness, the very central yet elegant location well reflect the sophisticated Ambre spirit,” says Ambre’s Siem Reap manager Roberta.

“We are now able to really separate our women’s wear collection from children’s wear and men’s wear, offering more comfort to our visitors.  And we are finally able to present some of our home decoration collection in Siem Reap,” he added.

Veasna Tith The beauty of art for hope and peace