Myth and legend swirl around Beethoven and his Ninth Symphony. In a new critical edition of the score, the Beethoven Archive in Bonn lets the facts speak for themselves — and has discovered some new sounds.

No work by Beethoven is so richly documented as the Ninth.

While upcoming performances of the symphony have been cancelled due to the coronavirus pandemic, the Beethoven anniversary year  nevertheless provides an opportunity to reexamine the masterpiece.

Beate Kraus of the Beethoven Archive in Bonn was responsible for a new critical edition of the score published by G. Henle, a publishing company specialized in sheet music reflecting the composer’s original intentions, known as “Urtext.”

Beate Kraus inspected many of those notes in various copies of the Ninth and in the score used for the first printing. That, and Beethoven’s first handwritten copy, were the main sources used for the new edition. Although Beethoven disliked letters and words, extant correspondence does exist concerning the work. In fact, “The Ninth Symphony has so many sources, it’s overwhelming,” says Kraus.

In years of work for the Beethoven House’s Research Archive, she evaluated the sources and encountered heretofore unknown material. Kraus was able to reconstruct a bass bassoon voice absent from all the other extant scores because Beethoven mentioned it only in a note on the margin. “It will sound different than before, she says. “Just when the baritone voice first intones the joyful melody, the bass bassoon plays along. A normal audience will hear the difference right away.”

In the new volume’s 160 pages of explanatory text, one chapter is dedicated to the origin of the work.

How the Ninth really came about

Beethoven’s Symphony No. 9 premiered in May 1824 in Vienna and met with tumultuous ovations. The commission had come from England, Beethoven’s onetime student and friend Ferdinand Ries, who sat on the board of directors of the Philharmonic Society in London, pulling strings. Beethoven had expressly asked Ries to produce the commission and solemnly promised quick results and exclusive rights to the world premiere.

The Londoners had to wait a long time for the work, only to see the Ninth premiered not in England but in Vienna. And that wasn’t all. Beethoven had abrogated other agreements: “The Londoners ordered a symphony — and a symphony meant a purely instrumental work — only to end up with something including chorus, vocal soloists and a German text: It was an unbelievable slight, to put it mildly,” explains Beate Kraus.

Nowadays the “unbelievable slight” is world famous. The melody Ode to Joy has been the European anthem since 1971, and the autograph score was named a world cultural heritage treasure in 2001.

The first symphony in music history to include vocals was set to words by the poet Friedrich Schiller. Over 50 other song settings existed before Beethoven, and all are presented by Beate Kraus in the new edition.

Schiller penned the text in 1785 as a drinking song in a circle of friends. Four years before the French Revolution, it was completely in the spirit of freedom, equality and brotherhood. In the ninth verse, the poem inveighs against despots: “Liberation from the tyrants’ chains, magnanimity to evil … The dead shall live as well. Drink, brothers, and intone the song: All sinners shall be forgiven and Hell abolished.”

Analyzing the text, Beate Kraus worked out the effect that Beethoven achieved by repeating text passages and applying certain musical techniques. “Beethoven used less than half of Schiller’s original text,” says the musicologist. The ninth verse, for example, doesn’t turn up in the composition at all. Beethoven, says Kraus, downplayed the drinking song and the revolutionary character but brought out the poem’s noble, exalted side. 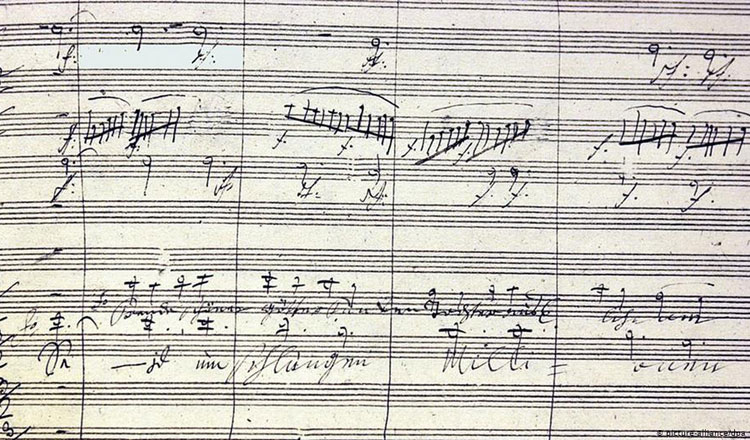 Beethoven too sympathized with the ideals of the French Revolution, for which he is often described as a revolutionary himself. “Of course he’s a revolutionary as far as his composing is concerned,” says Beate Kraus. “But I’d be extremely cautious about stylizing Beethoven as a political revolutionary.”

The composer had been socialized in a courtly environment; even his grandfather was a court orchestra director in Bonn. “Beethoven actually tried to get such a position all his life,” explains Kraus, and was prevented from doing so by political upheaval and poor health.

Nobility was the source of livelihood even for the “independent” composer, stresses Kraus: “To say that Beethoven had no desire for a courtly position but wanted to be music history’s first freelance composer — sometimes that’s the narrative — is in my view completely wrong because it confuses cause with effect.”

Beethoven the European is another myth surrounding the composer in the anniversary year. The line “All men shall become brothers” from the Ode to Joy fits the idea of European unity.

“Of course the Ninth is a central work of music history, and it has a message,”  Nike Wagner, director of Bonn’s Beethovenfest, told DW. “But Beethoven’s and Schiller’s idealism isn’t the same as ours. Are all human beings becoming brothers? Not that I know of. We shouldn’t listen for prophesy in it, but hope.”

Beethoven couldn’t have imagined today’s Europe, adds Beate Kraus. “We go backwards and say: Beethoven is the composer of the European anthem, so we conclude that he was Europe’s great political visionary.” When writing in letters about equality and brotherhood, Beethoven meant that nobility and religious dignitaries should not have a higher status that the common people. It wasn’t about solidarity between all the countries of Europe.

The French conductor Francois Xavier Roth nonetheless describes Beethoven as a European, albeit in a different sense: “Today, when we struggle for what our Europe could be, it’s certainly no coincidence that people need this Beethoven figure as a place where our common culture meets.”