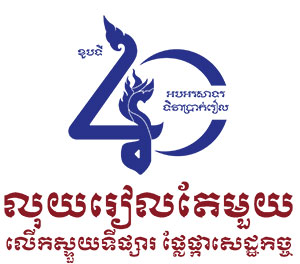 A question and answer session with Deputy Prime Minister and Minister of Economy and Finance. Dr. Aun Pornmoniroth in conjunction with the 40th Anniversary Celebrations of Reintroduction of Khmer Riel.

What is the role of the Ministry of Economy and Finance to regulate the Riel and how does it complement the National Bank of Cambodia?

With its mandates in leading the formulation and implementation of fiscal policy,  the Ministry of Economy and Finance (MEF) plays a complementary role; while the National Bank of Cambodia (NBC) is playing a leading role in regulating Riel.

In promoting the use of Riel, the MEF has three main functions, including macro- economic management, fiscal policy and budget management, and financial sector management.

a) On macroeconomic management, the MEF and the NBC are working together to ensure financial stability, stabilize exchange rate and maintain inflation rate.

b) For fiscal policy and budget management, MEF has introduced and implemented a number of measures to promote the use of Riel through government spending, revenue collection and debt management. For instance, wages, government subsidies, government- funded -infrastructures, domestic procurement, tax collection, public service fees, utility, and other forms of revenue are all settled in

c) The MEF also takes a leading role in managing non-banking sector by promoting the use of Riel in the capital market, preparing to issue government securities in Riel, and planning to impose deposit insurance policy in Riel.

What is the Ministry’s stance on De dollarizing the economy or even floating the Riel in the future?

The MEF encourages gradual approach on de- dollarization as medium and long-term goals, while placing equal importance on maintaining macroeconomic  stability, financial stability and enhancing public/investors’ confidence. In the meantime, building public trust and confidence in Riel by promoting its use will pave the way to achieving this objective. Also, de- dollarization must be done in a cautious manner by taking into account the global and regional economy, domestic economy, trade, financial deepening and evolution of the digital economy.

On the fiscal front, the MEF plays an important role in promoting the use of Riel by means of government expenditure, which represents approximately 27% of GDP via government projects, especially public reform programs. Therefore, the MEF can use this as effective tools to ensure successful implemen tation of de-dollarization strategy; yet it requires close cooperation with the NBC and all relevant stakeholders.

Floating regime can be a policy option in the future when de-dollarization is successfully completed. This regime allows flexible exchange rate which can absorb shocks during crisis and adjust itself with exports so that competitiveness can be maintained at an optimal level. However, volatile exchange rate might not attract FDI to some extent, and investors might have difficulties in managing their cashflow. To a certain extent, intervention is necessary in certain circumstances.

Is De-dollarizing even an option on the table? If so, in what period and if not, any particular reason why?

De-dollarization is the  ultimate goal, but as mentioned above the process must be carried out gradually over the medium and long term, in order to maintain favorable macro-economic environment with low inflation rate and stable exchange rate.

We have witnessed serious macroeconomic consequences of forced de-dollarization without the strong macroeconomic foundation for the case of some countries in the region. It led the domestic currency to depreciate and caused a loss of  public confidence. Thus, the NBC is working on a long term strategy and plan to  gradually promote the use of Riel.

As Cambodia is a small  developing economy navigating in the uncertain global environment, it is difficult to determine specific deadline for de-dollarization. However, setting a clear milestone and timeframe is important for medium and long-term direction on how to move forward with de-dollarization.

How do you see the Riel performing in the current economic uncertainty and would you be considering intervention in any form with regard to the Riel and its exchange rate?

Overall, the exchange rate of Riel is relatively stable at around 4,050 KHR/USD. For instance, the yearly average exchange rate stood at 4,052 KHR/USD in 2019. However, in the last two months, the exchange rate for Riel has varied to around 4,065 KHR/USD, which is slightly higher than the  (NBC) official rate last year and is noticeably high for this time of the year (seasonal low). Thus, for the recent economic development, the value of Riel has been depreciated against the US dollar but is still within its stable range. Nonetheless, the recent Covid-19 has further created  uncertainties of which the impact is hard to quantify.

With an increasing gross international reserves available at hand, I believe that the NBC stands ready to take appropriate measures to stabilize Riel currency if necessary.

Would any laws be proposed to protect the value and sanctity of the Riel through foreign exchange management?

As a small and opened economy, Cambodia has welcomed foreign direct investment (FDIs) through open sky policy with the aim to promote job creation, enhance economic growth, and facilitate exports. In fact, Cambodia 1997 Law on Foreign Exchange stipulates that there shall be no restriction on foreign exchange operation through authorized banks.

Moreover, the MEF does not have exclusive authority in foreign exchange management. However, we will make concerted efforts in protecting the value of Riel and promoting the use of Riel with the NBC. For instance, we have been implementing various administrative measures    (as mentioned earlier),   promoting macroeconomic  stability as well as sustainable debt management. In addition, the MEF is willing to work with the NBC on drafting laws on deposit insurance.

NBC Governor H.E Chea Chanto speaks about the Riel in conjunction with the 40th Anniversary of its Reintroduction, 20 March 2020

Financial institutions continue to see an uptake of Khmer Riels