Home - Love and laughter in this slapstick gem Tootsies & The Fake is a slapstick comedy from Thailand, directed by Kittiphak Thongauam. The movie centres around The Tootsies, a group made up of three gay guys – Golf, Kim and Gus (the tootsies) – and Natty, a lesbian. The film comes two years after the ending of the popular TV series, Diary of Tootsies, and everyone’s lives are getting more complicated.

Natty (Pattarasaya Kruasuwansiri), for example, is trying to hide her sexuality from her mother. She has her eye on an inheritance from her mum, but her mother keeps insisting she is leaving all of her money to the cat.

With her mum insisting Natty has to have a baby before she will get a cent, she has to find a man and quick. Golf (Thongchai Thongkuntom) is nursing a broken heart because his boyfriend wants to become a monk, while glam flight attendant Kim (Ratthanant Janyajirawong) is out of work. As for the film’s narrator, Gus (Paopetch Charoensook), he is living with his boyfriend but his ex is refusing to let go of what they had. 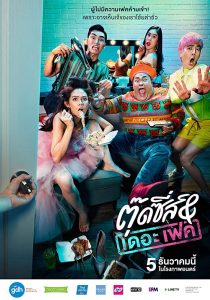 But when Golf and Kim inadvertently are the cause of a calamity involving superstar celebrity Cathy, the timing couldn’t be worse. She has a high-profile ad campaign around the corner and stuck in the hospital for the forseeable future, she could be sued. In turn, the Tootsies could find themselves in court.

The solution? To get a street hawker called Nam, who is the spitting image of Cathy, to pretend to be the star. The problem? Cathy is polite and sweet, Nam not so. In fact, she’s a little bit gangster. Both characters are played brilliantly by the super-talented actress Araya A. Hargate, who effortlessly steals every scene she is in.

In a millennial take on the classic transformation movie, My Fair Lady, which sees Audrey Hepburn learning how to fake it as a member of British high society, Nam is the ‘fake’ in this scenario. Can the group soften her sharper edges in time to pull of the daring rouse?

If you want to laugh until your sides hurt, then go see Tootsies & The Fake. And for all its frothiness and frivolity, the movie makes some powerful points about being brave enough to love who you want to and practising forgiveness and kindness.

Unfortunately, with recent COVID-19 developments, all major cineplex will be closed. In the meantime, we suggest catching up on other fun-natured shows at home. Now would be the perfect time to subscribe to a streaming service of your choice.

The man between beauty & war