Home - Ride of a lifetime

Ride of a lifetime

In July 2019, Abdul Mohsin T. Albaghli left the comfort of his home in Kuwait, heading out on his trusted 1000cc motorbike to discover the world in a way unlike many have experienced before. Around 120 days and 15 countries later, the 55-year-old arrived safely in Phnom Penh where he was welcomed by H.E Zaher alkhurainej, Chargés d’affaires of the Kuwait Embassy

The roving rider shares his stories with Anith Adilah Othman during his brief pit stop in the Kingdom.

Former mechanical engineer Abdul Mohsin T. Albaghli is used to the luxurious things in life. He has travelled first class, stayed at five-star hotels and has had the privilege of already experiencing many countries around the world.

In spite of this, the 55-year-old was still unsatisfied. After retiring from his job at the local oil refinery in 2013, Mr Albaghli still craved new challenges. That was when he decided to take the road less travelled – quite literally – on two wheels.

In 2013, he set out on a motorbike to conquer Europe, travelling through over 17 countries and covering a span of 60,000 km within just 60 days. Following that, he also took on Middle Asia, where he spent a little over five months, covering a 45,000 km distance, just before embarking on this trip that brought him to Cambodia.

“I want to explore my limits. If I had stuck to the luxurious lifestyle, I wouldn’t be able to challenge myself. The human body is amazing. If we don’t step out of our comfort zone, we will never know the limits of its endurance,” he explains. 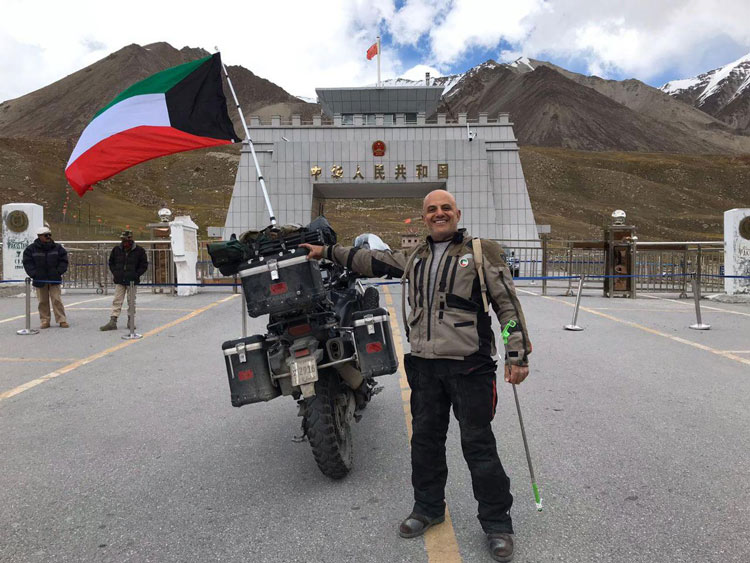 “Usually, I will spend a maximum of eight hours a day in the saddle. Driving requires full concentration, so I don’t want to exhaust myself. I’ll start after breakfast, around 7.30am and I will stop at around 3pm.

“Once a week, I will take a break. I will find a stop and spend about two to four nights there to recover,” he says.

Mr Albaghli added that his journey also allows him to “propagate” a peaceful message about Kuwaitis and Muslims in general.

“Kuwait is just a small dot on the globe and a lot of people still think that we are rural folks, away from civilisation. But that is not true.

“We know a lot and we can communicate well with others. We are also not terrorists,” he says, with a small laugh.

“We love peace and our religion is based on peaceful dealings with others. Causing harm is absolutely prohibited. In a way, I’m almost like an ambassador of the people of Kuwait. I want to spread love.”

Mr Albaghli says there wasn’t really any special preparations involved in embarking on such a journey. Armed with a GPS navigator, a sturdy motorcycle, a strong determination and willpower, he claims that almost anyone can follow his footsteps (or tyre tracks).

“It is not custom-built; I bought the bike from a dealer. I added a few accessories to help with my journey – like a saddlebag, containers, the GPS, a box, an extra tank and I also carry extra spare tyres. Even so, the bike was perfectly sufficient in its original condition,” he says.

Sharing his experience, Mr Albaghli says the challenges mostly lay in manoeuvring the terrains and acclimatising to the weather. He added there were also moments reminiscent of pages written by Sir Arthur Conan Doyle.

“From the Nepalese border at Rasuwa, I had to drive to Kathmandu, which was around 140 km stretch. For that specific part of the journey, there were no roads. The path was muddy because it goes through a forest.

“You might not know this but that particular area is home to Nepalese tigers, known for their ferocity and having the strongest jaws. I’m not joking; I could have been eaten with just one bite. Luckily, I focused solely on the driving and made it through in about 20 hours,” he says.

While Mr Albaghli is stoked to continue his adventures, the current situation, however, would not permit it. Due to the ongoing threat of the global COVID-19 outbreak, he is forced to end his trip and fly home from Kuala Lumpur, Malaysia.

“It is rather unfortunate as this will be the first time that I will be shipping my motorcycle back home,” he says.

To stay updated with this digital nomad, check out his Youtube page Albaghli TV, where he shares clips from his travels.