For more than four months, people living in some rural areas in the provinces of Pursat and Battambang have been suffering from water shortages. Canals, streams and ponds have dried due to high temperatures during this year’s dry season. Khmer Times reporter Pech Sotheary spoke to affected farmers to highlight their plight and local government officials to find out what solutions are in the pipeline for people who rely on crop cultivation for a living.

Pursat and Battambang provinces – Phay Seap is grinding chilli in front of her house in Pursat’s Boeng Khna commune in Bakan district as she tells a story on how much hotter the weather has been this year.

“We cannot cultivate dry-season rice this year because our ponds, streams and canals have almost completely dried up,” the 53-year-old farmer says.

“The situation this year is different than in previous years – we were able to cultivate rice at least twice per year then. The drought period this year has lasted for too long,” Ms Seap adds.

She says that today many farmers in her area have not experienced rainfall since November.

“When water sources dried, we had many difficulties irrigating crops,” Ms Seap says. “Some villagers even lack water to drink – they have had to buy water for 35,000 riels [about $8.50] per container.”

“The water from the container would only last for up to 10 days,” she adds.

Dok Chanry, 38, from the same commune, says one of her brothers had to migrate to Thailand to work as a construction worker for extra income because her family is lacking food due to the drought. “There is a shortage of water for daily use and dry-season rice cultivation this year,” Ms Chanry says. “Some villagers moved to Phnom Penh, Preah Sihanouk province and Thailand.”

“If there were canals with sufficient water stored, we would be able to stay home and cultivate rice two to three times per year,” she adds. “We would be able to have enough to eat and sell. We were able to grow chillies, cucumbers and cabbage.”

Agriculture is a driving factor for the Kingdom’s economy, but despite having land and natural water sources, irrigation system development is lacking.

The restoration project targets six areas in the provinces of Kampong Chhnang, Pursat and Battambang, where about 8,500 families on more than 13,000 hectares will benefit.

The project is currently at 90 percent completion.

Phal Phally, a resident living near a canal being revitalised by JICA in Sampov Meas district, says he hopes the project in his area will be completed soon.

“The drought this year has lasted long due to natural factors and climate change,” Mr Phally says. “We do not have enough water to cultivate dry-season rice twice per year like before.”

Farmers in Battambang province’s Moung Russei district are also speaking up over the shortage of water this year.

Moul Moeun, head of the Chrey farming community in the district, says JICA helped form the community in 2010 through education.

He says community farmers benefited greatly from JICA’s education initiatives as many of them were able to consistently cultivate rice.

“We were able to cultivate 198 tonnes of rice last year [during dry and rainy seasons], but because of the drought this year, we have only been able to harvest 98 tonnes [during the last rainy season].”

In Sovanmony, a deputy director of the Battambang agriculture department, says some of the 360,000 hectares of land used to cultivate rice in the province are affected by drought.

“Since the end of the rainy season in September, we have had no rain at all,” Mr Sovanmony said. “In November, water started drying up, which created a difficult situation for farmers. We need water sources so farmers can harvest.”

“For the dry season, the government has issued a sub-decree advising farmers against cultivating rice twice,” he adds. “Farmers would lose money if they try to plant crops during the drought.”

“Some farmers are not following this sub-decree and still choose to cultivate rice twice [during the dry season],” Mr Sovanmony says.

So Sahong, Kravanh district governor in Pursat, says farmers in his area have not been following government instructions.

“In terms of daily food consumption, there has been no shortage,” he says. “However, the farmers need more income so they have been trying to cultivate dry-season rice.”

He says some people in his district migrated to other provinces and even abroad to generate income for their families.

Prime Minister Hun Sen in November issued a directive calling on farmers to limit their harvest due to water shortages.

The Water Resources Ministry on Monday reported 23,000 hectares of rice land in Pursat and more than 18,035 hectares in Battambang were salvaged after the government deployed water pumps and trucks.

The ministry also reported farmlands in 13 other provinces were saved.

Chan Youttha, a spokesman for the ministry, says shortages of water in Pursat and Battambang are attributed to El Nino and two other weather phenomena.

“The current water consumption issue is not as serious as how it was in 2016,” he says.

Mr Youttha says the government is working with the Asian Development Bank to construct a large-scale irrigation system called Damnak Cher Krom in Pursat and the Doun Tey water reservoir in Battambang.

He notes, once complete in 20 months, Doun Tey will be able to store 163 million cubic metres of water.

“Once these infrastructures are done, we will no longer face water shortages in any season,” Mr Youttha says.

Mr Youttha notes the government is working hard to develop the Kingdom’s irrigation systems to meet the needs of Cambodians.

The issue of drought has also caught the attention of the Mekong River Commission because water shortages are happening across Indochina.

In November, the MRC approved a drought management strategy allowing Cambodia, Laos, Thailand and Vietnam to collectively address the issue. 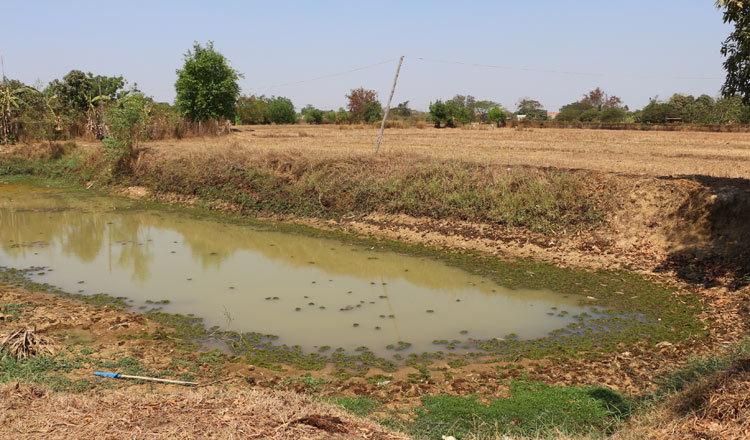 The strategy is to jointly monitor soil conditions and water flow while holding capacity building initiatives to assess, plan, measure and share information about water shortages.

“As countries in the region gear up for drought preparedness and mitigation, this strategy will help reduce the vulnerability of people and water resource systems affected by droughts, improve government adaptability and allow members to share information,” Mr Kean Hor says.

Back in Pursat, Mr Phally, the farmer, says he hopes plans in motion can address people’s agricultural needs.

“People need water the most – when there is sufficient water to be used, people are happy,” he says. “As long as farmers can cultivate rice two to three times per year during the dry season, living conditions of families will improve.”