Aftermath of Chinese Exodus from Sihanoukville

Sihanoukville – Over the past few years with the influx of Chinese nationals and Cambodians working in Sihanoukville, landlords have been laughing all the way to the bank through rentals. Locals who visit the city regularly complained about high rentals for hotels, guesthouses and even food. Some said during special events, public holidays or on weekends they found it difficult to find accommodation.

Sitting along the O’chhoeuteal Beach with his friends’ Cambodian tourist Oug Noy, 25, says since a mass departure of the Chinese from the city, prices of food and accommodation have now halved.

He says he noted the huge change since he last visited Sihanoukville a year ago.

“Previously, when my family came to visit, we found it hard to find accommodation. Everywhere was fully booked mainly by Chinese nationals,” Mr Noy adds. “We even found it hard to find a good Khmer restaurant because most had been rented out to the Chinese. Now most are empty and we don’t spend time having to scout for rooms and restaurants like before”.

The ban on online gambling and the outbreak of COVID-19 globally are turning away hundreds of thousands of Chinese nationals, leaving a trail of landlords going bankrupt and unemployment due
to businesses ceasing operations.

Departure of the Chinese Nationals

“Since early this year, almost 80 per cent of Chinese nationals living and working in Sihanoukville have left,” says a local landlord who is a civil servant. “They are leaving because of the various issues created by social and economic impact.”

Prime Minister Hun Sen on August 18 issued a directive banning all online and arcade gambling in the Kingdom in a bid to safeguard security and public order. He stated some licenced online gambling operations rigged their games and threatened those not able to repay gambling debts.

Since the ban and closure of 73 casinos who ran arcade gambling came into effect in early January, General Department of Immigration reports more than 200,000 Chinese nationals left the Kingdom with the majority from Sihanoukville.

According to the provincial Labour department, they recorded only about 2,000 Chinese nationals with work permits still living in the province amid the closure of dozens of casinos in the city, leaving nearly 10,000 local workers jobless.

“In 2019, there were 22,000 Chinese nationals who had business or work permits, but now there are only about 2,000,” said provincial Labour department director Yuv Khemara.

Following the detection of the COVID-19 in a 60-year-old Chinese national early this year in the city, who later recovered in the provincial referral hospital, residents say they feel unsafe going outdoors and businesses have temporarily shuttered over fear of getting infected.

During a recent exclusive interview with Khmer Times, provincial hall spokesman Kheang Phearom informed that not only did the online gambling ban turned away the Chinese nationals,  it was also the outbreak of the Novel Coronavirus known as COVID-19.

“Their leaving also was related to building projects where most of the Chinese nationals who came to Sihanoukville were investors, construction workers or online casino employees. When we decided to close online gambling, it affected their livelihood,” he says.

According to Mr Phearom, the ongoing projects of building 34 roads, which the government allocated $294 million and approved in November to develop a major road in Sihanoukville, also impacted Chinese businesses, causing them to leave.

He says the ongoing major road construction in the coastal town also disrupted the Chinese businesses, which caused them to temporarily cease business operations.

The influx of Chinese nationals to Sihanoukville has been a hot topic in the Kingdom for the past few years, with many concerned over a reported spike in crime.

The city was even cited by international media as a “dangerous town” due to the high number of crimes, especially committed by some Chinese criminals.

Safety concerns in the Sihanoukville prompted the government to create specialised groups aimed at curbing crime committed by foreigners.

In August last year, the National Police formed an 11-member working group, drawn from senior officials from various departments to evaluate the security situation in the province. It reported that an increase in Chinese investments led to Chinese setting up criminal networks.

Major General Chuon Narin, the provincial police chief, said in response to the concern, authorities installed a total of 600 security cameras in 500 central locations in Sihanoukville, including along 34 newly-constructed roads.

“Six hundred cameras will be installed in 500 important places to monitor activities related to security,” he said. “A command centre will be in the Preah Sihanouk provincial police headquarters.”

A senior provincial police officer in charge of security told Khmer Times, before these citizens left, the number of crime reports were high.

However, with the mass departure of Chinese nationals, it has changed the security situation in the coastal town.

A recent report from the GDI stated the authorities deported more than 1,500 foreign nationals from various countries over multiple types of offences last year, in which more than 1,000 were Chinese nationals.

It notes these foreigners committed crimes, inclusive of extortion, online gambling, fake passports, visa breaches and drug crimes among others.

According to a recent Interior Ministry report, last year there were 558 victims of foreign investors and tourists, a five per cent increase compared to 2018. It said there were a total of 681 victims, of whom 245 had died. It noted that the majority of the victims were of Chinese and Vietnamese nationality. 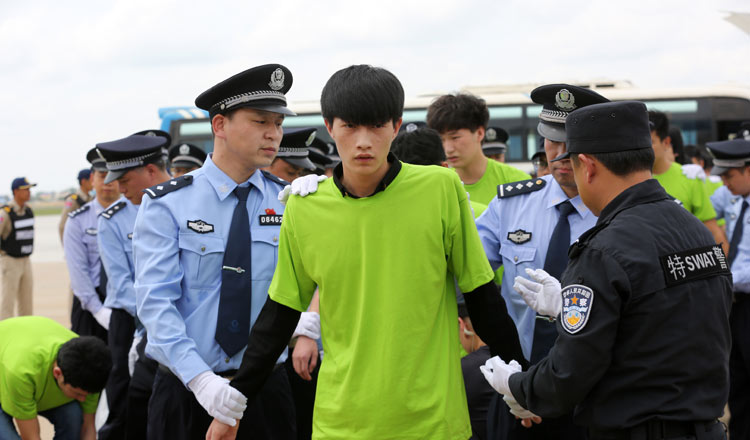 It said the province recorded the most number of incidents along with Siem Reap province and Phnom Penh. It said foreign perpetrators also increased compared to 2018, with 324 cases involving foreigners, a 15 per cent increase.

However, the senior provincial police officer said since the departure of Chinese nationals early this year, he has noted the crime rate reducing.

“Before we were busy day and night to protect the security, especially from some Chinese nationals who make a lot of trouble in the city,” he said. “But now, since their departure, I have noted the crime has reduced.”

“Before there was a lot of trouble caused by some Chinese who committed a number of crimes, including VoIP scam, extortion, kidnapping, robberies, murder and even violence on the streets.”

He says since their departure, police now are able to concentrate on other misconducts and lawlessness that occurs and do not have to just focus on crimes committed by Chinese nationals.

Song Bunphon,30,a Sihanoukville resident agreed with the police officer. He says Sihanoukville is much safer and quieter compared to the previous years.

“I have noted our city has been changing,” he said. “I can say there has been an 80 per cent change. In the past, every morning when I read the newspapers, I see frequent reports about Chinese nationalities involved in committing violence, kidnapping or murder cases. Now, this seems far less frequent as it is not covered by local media,” he says.

He said starting from January this year with the exodus of Chinese nationals from Sihanoukville, families are experiencing a drop in rentals for rooms which has dropped from $150 to $100 per month.

A walk through the city once known for its boom from Chinese investments presents a different scenario: abandoned unfinished construction buildings, unoccupied apartments, guesthouses, hotels, supermarkets shuttered restaurants and casinos.

“The Chinese owned the majority of construction around this area. Due to the mass departure of a majority of them, operations have since been suspended,” says, Y Sann, a contractor of a seven-storey apartment building in Buon commune.

Along busy streets in the city, partially completed buildings have “For Sale” signs in three languages, Khmer, Chinese and English.

Uy Ratana, a landlord in Sihanoukville, remarked with the influx of Chinese nationals to Sihanoukville, her family income thrived from rentals of her apartment.

She said Chinese employers were also her clients. They rented her apartments for Cambodia workers working in their casinos. However with their departure there has been a drastic drop in occupancy with more than half of her apartments left empty.

“Since the government banned online gambling, most of the Chinese employers have left,” she says. “They used to rent my apartments for their 100 odd workers who were mainly Cambodian. When most of the casinos closed, Cambodian workers become jobless, then we landlords suffered,” she says. “Before I used to rent apartments for $200 to $300 per month per room, and they housed between 7 or 8 Cambodians in each room.”

“Some of the landlords took a loan from the bank to construct these apartments for rental for Chinese or those Cambodians working for Chinese, and with most of them gone, how can they settle their debts?”

“I see there is only 20 per cent of these Chinese nationals remaining in the city, and with the coronavirus outbreak, the rest of them have left Sihanoukville,” she said. “You can see that is the situation right now, there are rooms available but no guests occupying them.”

“I don’t know how to describe the situation like you see some of the finished apartment now, but the signs show they are for sale,” she adds.

Another landlord says his apartment which was rented out to the Chinese nationalities have been left unoccupied and abandoned.

“Our city is quieter,” he says.

He adds the ongoing road projects in the city and the outbreak of COVID-19 also affected the economy in Sihanoukville.

“The situation is like you dig a pond to feed the fish, but the pond has no water, so how can you support your family?” he says. “How can the landlord pay the banks? This is the big challenge,” he asks.

Mr Phearom, the provincial hall spokesman, says the online gambling ban did not affect those who invested in the garment, footwear and other sectors. He says they remain invested in the city, especially in the special economic zones.

“I think after our road construction is done, they will return,” he says. “We will always welcome Chinese nationals.”

He says COVID-19 is a global issue and he hopes the situation will change in the near future.

A landlord agrees with Mr Pheaorm, and hopes the Chinese businessmen and investors will return to Sihanoukville after the road projects in Sihanoukville are done.

“I think our government is paying attention to the problem,” he says. “I wish normalcy will return soon.”

Khun Tharo, programme manager with the Alliance of Labour and Human Rights, says the mass departure of Chinese nationals from Sihanoukville is a “crisis” for Cambodians who relied on Chinese income.

He says the people of Cambodia should not depend too much on the Chinese but depend on themselves.

He calls on the government to pay more attention to solve ongoing issues in the long term.

Court yet to charge major general in land reclamation case