Home - The man behind the mask

The man behind the mask

Siem Reapers know him as Damon Divine, the muscular dude who prowls the Pub Street precinct by night spruiking for OWE Angkor Warriors, a new fight club where he also performs nightly as a professional wrestler and has just been promoted to venue boss.

But Damon Divine is also Damon Hoffman, aspiring actor, whose career is on hold while he’s living in Siem Reap.

“I left everything behind – my personal training business and my acting career – when I came here for this wrestling opportunity,” he explains. 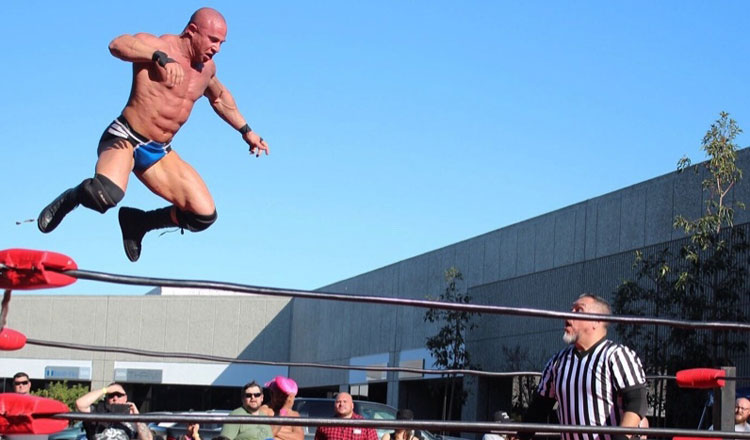 But while his acting career is currently on hold, his previous work keeps popping up on screens around the world. Before leaving the US he worked on a video clip for Flula Borg, an LA-based YouTube personality, whose talents range from DJ-ing to comedy. In the video ‘Self Care Sunday’, Damon plays Robert, a personal trainer decked out in dubious pink gym gear who ends up dead, and a still from the video featuring Damon made it onto the album cover.

Damon’s role in the video also became a discussion point on Conan O’Brien’s US talk show in October 2019, much to the actor’s delight.

“I have watched Conan and enjoyed his comedy since I was a teenager,” he says. “As a teenager I grew up poor. We didn’t have cable TV and Conan O’Brien was one of the only shows that came in at 12:35am, immediately after the Tonight Show with Jay Leno on one of the two free channels that we did have.

“Conan was always my favorite because he’s so funny. I had always dreamed of being on his show one day. So to be featured on his show in the Flula music video was pretty spectacular and surreal. I’m pretty proud about this accomplishment.”

Another exciting project on the horizon for Damon is the worldwide release on February 7 of the Warner Bros movie ‘Birds of Prey’, a companion movie to Suicide Squad, the hit 2016 superhero film based on the DC Comics super-villain team.

The movie stars Margot Robbie and Damon has a small role.

“This is the movie that gained me my Screen Actors Guild status,” he explains. “Working on ‘Birds of Prey’ was not only one of the best experiences of my career but a turning point, too.

“I was heavily featured in a scene with the other main actors in the movie. I played one of the gang members just looking like a bad ass. The set was outdoors in Los Angeles and was built to resemble an old amusement park. I can’t wait until this movie comes out. It is going to be awesome,” Damon says excitedly.

While making the movie, he was also working on another indie movie, ‘Freak Beast’, about a pro wrestler.

In 2018 he played a soldier in the movie, ‘Bumblebee’, a sci-fi film based on a Transformer character, and in 2018 he also landed a small role in the movie ‘Alpha’. Talking about the experience on the big-budget movie, Damon says, “I played a Neanderthal. On set I worked with the same prosthetic and makeup team that worked on ‘The Walking Dead’. It took about two hours to complete my makeup and prosthetics. We filmed at one of the studios in Los Angeles and the scene followed a group of Neanderthals, holding long spears, chasing down some buffalo.”

“It was one of the toughest scenes I’ve ever worked on because we spent almost 10 hours on it,” he recalls. “They put ice on the ground for us to perform the scene on

and the shoes we wore were those toe shoes with the individual toe pockets [later edited out]. We spent hours filming the scene and I could not feel my feet or toes by the end of it!”

While his alter-ego Damon Divine’s night shift gig as a pro wrestler in Siem Reap is tough, David Hoffman reckons the acting game can be even tougher.

“I have worked tirelessly to be successful in the acting industry, working 24 hour-plus days and I’m always willing to go above and beyond and put in the work,” he says. “All the hard work and no sleep and making it to work – even though it was a two or three hour drive for me to get to Los Angeles – has been worth it.

“During filming of Birds of Prey there would be night calls which meant that I would start at around 7 or 8 pm and finish around 6 or 7am. And I’d have to do the two hour-plus drive home from Los Angeles back and forth every day with little to no sleep.”

But being busy is a turn on for Damon.

“One of my biggest inspirations is Dwayne ‘The Rock’ Johnson and someday I plan to be as successful as him,” he says. “I want to constantly be busy and working on new projects like Dwayne. I do not like too much downtime.”

Finding peace on the Giant lake