The sudden decision of Prime Minister to visit China and the warm welcome by Chinese leaders at such short notice signifies a special bond between the leaders and peoples of the two nations. This is a new era of “ironclad” friendship and partnership between the two countries.

Prime Minister Hun Sen is the first foreign leader to  visit China after the outbreak of the Novel Coronavirus that has caused global panic. The trip sends a clear message that Cambodians is standing together with the Chinese in the fight against common threats such as a viral pandemic.

Although Cambodia is much smaller and weaker than China, the bilateral relationship is equal because both countries have shown mutual respect especially with regards to national sovereignty and independence.

The bilateral political and strategic trust between the two countries is deep and solid. No outside force can change this. The future generations of leadership in both countries will continue to nurture and sustain this traditional friendship. General Hun Manet, the commander of the army was also in Beijing during the meeting with top Chinese leaders.

Connecting and building trust between the young generation of leadership between the two countries is crucial for the future bilateral friendship and partnership. Mr Hun Sen has sent a clear signal that the ironclad friends will continue to blossom for future generations.

Mr Hun Sen and President Xi Jinping have pledged to speed up the negotiation process on the bilateral Free Trade Agreement (FTA). The first round kick-started in January this year. It is expected that the agreement can be reached after three rounds of negotiations within this year.

Cambodia is trying to expand the market for the export of agricultural products such as rice, corn, rubber, cassava, mangoes, pepper, bananas and cashew nuts. Investment in agro-industry has been one of the top priorities of the Cambodian government. China is going to expand its investment in this area.

The community of shared future is the grand strategy of China’s foreign policy- it aims to build a more inclusive and fair international order specially to raise the voices and leverage of developing countries.

Looking forward, Cambodia and China will continue to deepen their strategic partnership especially in economic cooperation. The future conclusion of the bilateral free-trade agreement will significantly promote bilateral trade and investment flows. 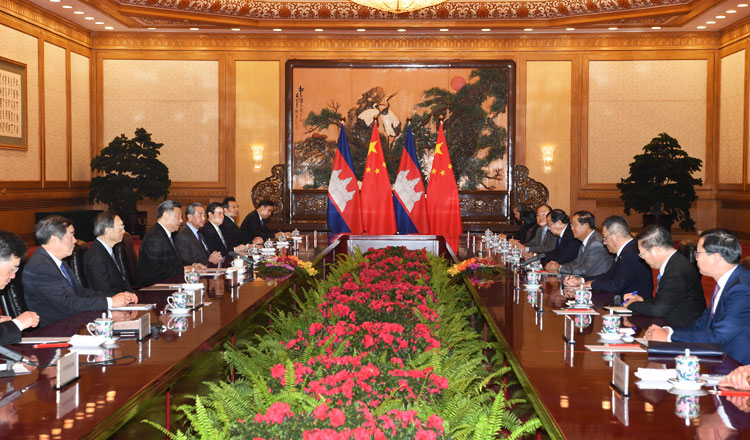 For Cambodia, economic security is national security. Providing job opportunities to the young workforce, expanding and diversifying export markets and developing critical infrastructure and human resources to develop a fully fledged digital economy are the key economic priorities of the Kingdom.

In this respect, analysts and officials in charge of investments are holding their breath anxiously to see the response of Chinese investors to major private sector development projects in Cambodia, especially in Sihanoukville, which has been hit with a double whammy.

First, the ban on online gambling and arcade games and its total enforcement sent several hundred thousand Chinese nationals fleeing the coast and the country.  This affected tourism arrivals as well as business opportunities, made more difficult by the poor infrastructure at the coast.

Then came the second blow, even before the dust from the first blow had hardly settled. The Coronavirus and its source of origin, Wuhan, China, cancellation of flights by airlines, dropping arrivals from China all across the country.

The challenge and test of the China-Cambodia relationship and China’s commitment to the Belt and Road Initiative in Cambodia, to which it has made huge commitments, will be up for question and assumptions.

The never-ending saga of the secret naval base at Ream and Koh Kong keeps resurfacing although countries, which accuse Cambodia of hosting this, have very sophisticated satellites to grab real time images.

The fact that China and Cambodia have yet to make a joint shoulder-to-shoulder statement, firmly denouncing this leads to further speculation.

On the part of the speculators, if they indeed have such secret documents in their hands, supposedly leaked, they should produce evidence at least in the form of releasing excerpts so that both Cambodia and China can confirm, deny or not comment at all.

A firm decision has to be made and as difficult a time as it is for China and Cambodia, because both are suffering directly and indirectly because of the Coronavirus, true friendship also comes with true camaraderie and joint statements to put to bed, once and for all, the seemingly nonsensical and endless speculations on various aspects of Cambodia China ties, including the ubiquitous debt trap which also does not exist.