Cambodia’s government is hoping to retain its preferential trade status with the UK after it left the European Union.

Currently the Kingdom benefits from a preferential trade deal with the EU known as Everything but Arms (EBA) but there are fears this will be withdrawn later this month amid allegations of human rights breaches.

Although the UK will be bound by EU rules during a so-called transition period lasting until Dec 31, the Cambodian government hopes that if the privilege is removed it will then be restored by the UK next year.

The UK officially left the EU after nearly five decades of membership, meaning it is no longer part of the largest trading bloc in the world currently numbering 27 countries and is keen to find new trading partners.

Ky Sereyvuth, an economics professor and also director of the Royal Academy of Cambodia’s Centre for China Studies, told Khmer Times yesterday that he had learned the UK will seek to maintain a special trade privilege for Cambodia, citing that the official Brexit deal will give right the UK to do so – but possibly only after the transition period ends.

Speaking during a graduation ceremony in early December last year, Prime Minister Hun Sen said he is closely following the situation in the UK and its relationship with the EU. In his speech, the Cambodian premier pointed out that the UK is the largest market for Cambodian exports inside the European bloc.

“The UK has the largest share of our exports in the bloc and the UK has a special trade policy that will continue even after the country leaves the EU,” he said. 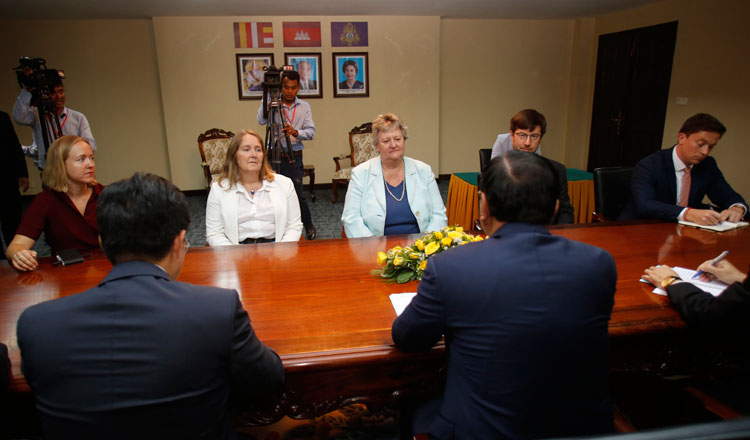 Mr Sereyvuth said he expected that the two countries would likely begin discussing a free-trade agreement some time this year.

“I would expect that during the time Samdech Prime Minister Hun Sen attends the peace summit in South Korea this week he may have a chance to talk on the sidelines with a UK official and the two countries will probably arrange official negotiations regarding the trade deal,” he said.

He said if the Kingdom is given the green light for a UK free trade agreement, it will help Cambodia to export more products to the market, including food, garments, handbags and foootwear.

During her visit to Cambodia last year September, Heather Wheeler, UK Minister of the Foreign and Commonwealth Office for Asia and the Pacific, told Cambodian Minister of Foreign Affairs and International Cooperation Prak Sakhon that Cambodia is among 48 less-developed countries that will retain trade privileges in the UK market.

Wheeler reportedly told Prak that the UK will request Cambodia’s support to become a dialogue partner of Asean.

Meas Kimheng, under-secretary of state at the Foreign Affairs Ministry, said Germany and the UK together import more than $1 billion a year of Cambodian goods.