Home - Ecotourism on your doorstep

Ecotourism on your doorstep

Living in a crowded city like Phnom Penh can be a pain in the neck, metaphorically and literally. As if all the noises and pollutants were not enough, the residents are now stressed-out because of a new deadly virus haunting people’s mind around the world. So you want to escape from all of this, as well as to relieve your depression and exhaustion from your backbreaking world. Maybe you want to visit a fragile, pristine, and relatively undisturbed natural area. For those who want to be embraced by Mother Nature’s creations, but do not have enough time or the budget, Taing Rinith will recommend some attractive but less well-known ecotourism destinations near Phnom Penh, where you can find yourself a safe haven.

On a satellite map, Anlong Chen can be seen as a crescent isle on Bassac River, a distributary of the Tonlé Sap and Mekong River. It does not have any manmade resorts, mountains or sacred temples. Yet, the island has everything to offer for the fans of Robinsonade masterpieces like Lord of the Flies or Castaway. Who fancies being marooned on an island devouring the fish they catch, the fruit they pick and of course trekking through the jungle.

On Anlong Chen, you can see the stunning scenery comprising of a river view with fishing boats, a great inspiration for photographing and painting.

If you happen to be a keen angler, the bank of the river near the pier is a good spot for you to satisfy your hobby and of course to catch your lunch. The friendly local fishermen are always happy to join and share with you their way of life. This spot is also a good place to view the sunset over the river in the evening.

However, Anlong Chen is more well-known for its crops and fruit rather than being a tourist attraction. Thanks to its nutritious soil, people can find good vegetables and fruit grown without chemical fertilisers. The isle is also particularly famous for its longan fruit, a tropical member of the soapberry family. Longan trees which give the fruit its musky sweet taste can be found practically everywhere.

Phnom Baset is one of the most popular biking destinations for a reason. The hillock resort, located about 15 km north-west of Phnom Penh, deserves to be called a “botanical park” as it presents a wide range of local trees that exist only in Cambodia.

Once you arrive at the top, the first thing you do is enjoy the beautiful view of the surrounding plains, lakes, rivers and rice-fields. The air on the hill is fresh and usually cool all year round.

The local families have opened several food stations, which provide visitors with inexpensive country dishes such as Grilled Fish with Green Mango Salad and Roasted Chicken with spicy sauce. They also offer a relaxing seating area, in which you can enjoy the breath-taking views on a swinging hammock while waiting for your order. 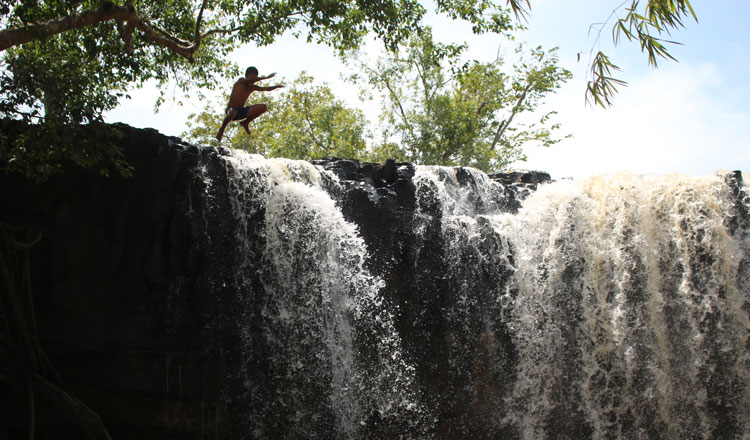 Although it is not completely covered by groves of trees, Saang Phnom is still a beautiful mountain. With the existence of natural boulders as well as manmade structures, that include a stair with a naga railing on each side leading to a small Buddhist temple on the top. The air is always cool and fresh here whilst during the rainy season, the hill looks like a “forest island”.

As you take the first few steps off the stairs that go up the mountain, you are guaranteed to detect the fragrant smells emanated by various tropical mountain flowers. A smell that at least for a while will help you forget the car fumes you inhale every day during rush hour in the city.

These two resorts are the farthest away from Phnom Penh on this list, but not as far as the country’s northeastern provinces of Mondulkiri and Ratanakiri, however, they provide a very similar experience for the enthusiastic adventurers. Taking approximately two hours by car to visit these two destinations.

Phnom Da is surrounded by dense forest and topped with an ancient temple. In its flank, there are five man-made caves, each of which contains Shiva lingam and Uma yoni, objects worshipped by the Hindus.

Phnom Da temple is 12 meters squared and 18 meters high was constructed of laterite, brick and sandstone. With a peak that is severely damaged, the temple has illustrations of the figure sleeping Vishnu and a broken sculpture depicting the samudra manthana or Churning of the Ocean of Milke (known in Khmer as Ko Samutra Teuk Dos), one of the most well-known episode in Hindu philosophy. It also has four doors, but only the one on the north side is real. About 300 meters southwest of Phnom Dais is another smaller temple with a similar style known as Asrom Moha Eysei, which translates as the dwelling of the hermit.

At the foot of the Phnom Borey, a part which is located near a riverbank lies a few resorts with grass huts. This is a place you can relax in one of the hammocks while enjoying the great scenery of the river and good country meals with fresh ingredients and a few drinks with your friends.