More than 100 former customer service officers of Cintri Cambodia Co Ltd have petitioned Prime Minister Hun Sen to intervene in their dispute over unpaid compensation wages after they were laid off last month.

The workers have been protesting in front of the company’s headquarters along Phnom Penh’s Monivong Boulevard since January 2.

Nhor Buntha, 32, their representative, said they are demonstrating because following the terminination of their services on December 30, Cintri offered to pay them only 50 percent of their wages which went against the labour law.

He said the staff rejected the offer and demanded full payment.

“We have protested in front of company for almost a month without any solution and decided to send a petition to Prime Minister Hun Sen to intervene,” Mr Buntha said. 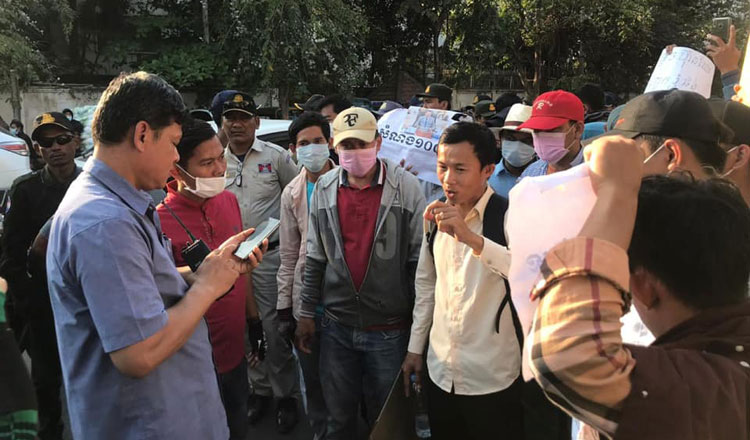 He said they requested Mr Hun Sen to help them obtain full compensation of their wages and also to ask City Hall to accept them as staff of the Phnom Penh Waste Management Authority.

“We plan to protest in front of the company president’s house and if we still do not have a solution, we will gather in front of City Hall,” Mr Buntha said.  As a last resort we will assemble in front of Prime Minister Hun Sen’s house.”

Cintri deputy president Seng Solyda could not be reached for comment yesterday.

Heng Sour, a Labour Ministry spokesman, said yesterday both parties have not reached a compromise yet and the ministry will continue to cooperate with City Hall and monitor the case.

“Labour disputes must be addressed through legal procedures,” he said.

ASEM this November to only serve Khmer food