The annual Cambodian Urban Art Festival is finally here, and this time it is bigger than ever with a week-long celebration in the capital, followed by several more days of artistic fun in Siem Reap next week.

The Festival – the sixth in its series – is known for providing a platform for street artists from all over the world to leave their creative marks on the walls of Phnom Penh and Siem Reap.

Cambodian Urban Art Festival organiser Laetitia Troussel said this year’s Festival will be quite the extravaganza with a total of 15 artists and 20 performers from Cambodia, France, India, Thailand, Portugal, USA, Poland and Taiwan.

“Our mission is still the same – firstly, to professionalise local artists. We want them to be committed to their arts, we want to show them that their work is valuable and that they deserve to be exhibited in commercial galleries.”

“For foreign artists, we are encouraging an exchange of culture through their artworks. That is why we try to mix different kinds of art. It is very exciting as we have many different things lined up,” she explained to Good Times2 on Tuesday.

The Festival was kicked off with a soft launch at Sra’Art Gallery on Tuesday, which drew a huge crowd in spite of it being a weekday. Those familiar with the local art scene would be able to spot many familiar faces among the crowd, most of whom also dabbled in one form of art or another.

Two muralists Chunnly & Kolab conquered the wall opposite of the gallery with their iconic paints while India’s Full Zero and Portugal’s Le Funky showcased their talents side by side in a live painting session just outside Sra’Art.

The crowd’s attention was then drawn towards the first floor where Daro Sam’s digital live painting on a graphic tablet was projected straight onto the gallery’s white walls.

Other artists that also demonstrated their works that evening were Kakada Yi, who is known for his signature two-canvas painting, and Phuc Van Dang, a Danish artist who wowed the audience with his acrylic prowess.

Sra’Art founder and director Cécile Eap Berg said the brand-new gallery decided to partner with the Festival as they both share a mutual interest in promoting the work of Khmer artists.

Not only will such an event increase the artists’ visibility, she said, but it will also promote the idea of accessible art among members of the public.

“Unfortunately, the idea surrounding art here is still very elitist. People don’t want to go to an art gallery because they cannot afford the pieces there. When we do events like this, people show up because art is viewed as something fun for all,” she elaborated.

“Personally, when I build this gallery, I don’t want art pieces to just be on the wall. I want a space to create art, to have people react and be emotionally affected by art. When you are here and interacting with art, you are already a part of the urban art movement.” 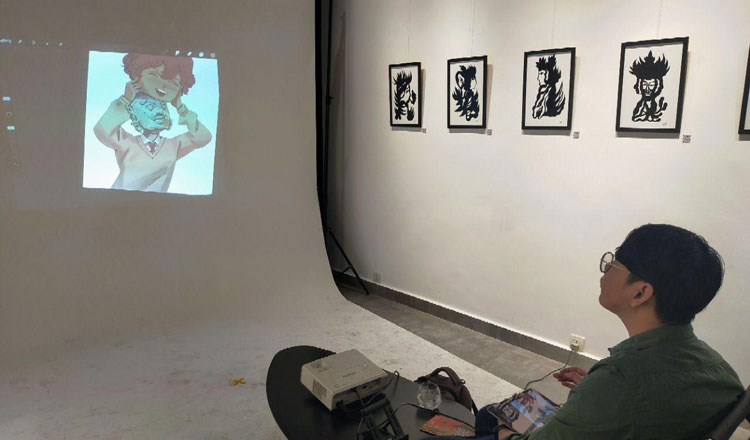 The Festival continued with an open-air movie night at the Futures Factory on Wednesday night where John Pirozzi’s iconic 2014 documentary Don’t Think I’ve Forgotten: Cambodia’s Lost Rock and Roll was projected on the “travelling screen”.

The 5 meters long, and 7 meters high inflatable screen is a newly-born project which made its pit stop in Phnom Penh for one night only, in conjunction with the Festival. The entire venue was transformed into a huge makeshift cinema, packed with local and foreign art enthusiasts.

On Thursday, the focus shifted to Meta House on St 178, where several talks, exhibition and screenings under the theme City Talks and Digital Experience took place. To discover the city’s past through art and architecture, the event garnered a lot of art and urbanism enthusiasts. 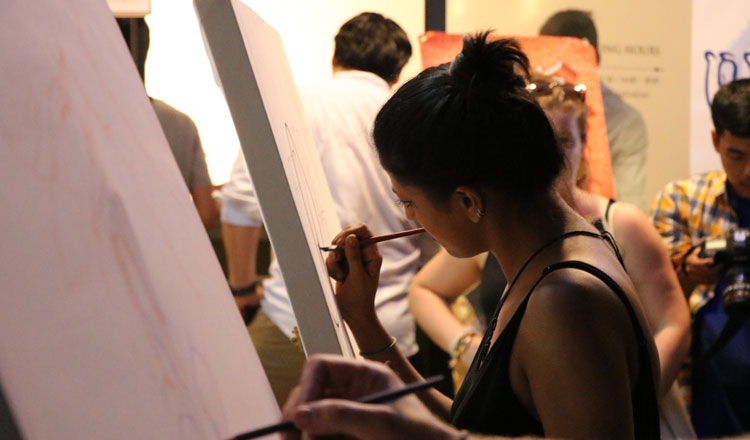 After the talks, a digital piece and electronic music echoed through the Meta House black box. The evening ended with the screening of the documentary film “The Man Who Built Cambodia”, to learn about Vann Molyvann’s legacy.

The highlight of the Festival, however, is today’s opening party at Futures Factory on St 13 that starts at 6 pm. Not only will there be live painting, music and performances, the opening event will also host special pop-up bars all night long.

Tomorrow, Sra’Art is set to host another event dubbed the Wine & Art Pairing Tour for only $20 per person. Meanwhile, the seventh day of the Festival will see the Closing is Sharing Party at Enfants d’Asie Cambodge, where several muralists will paint the school’s walls to cap off the week-long festivity.

Keep tabs on all these events by following updates on social media.