The Vietnam Rubber Group (VRG) is planning to expand  its current plantations in the Kingdom.

The VRG, a state-run enterprise in Vietnam has invested in large-scale rubber farms in seven provinces in Cambodia. It disclosed the expansion plan during a meeting with Agriculture Minister Veng Sakhon in Phnom Penh. At the meeting, the Vietnam Rubber Group was represented by Chairman Tran Ngoc Thuan.

Tran noted that the company collected 50,000 tonnes of latex from its 47,000 hectares of Cambodian land last year.

“We would like to thank the Ministry of Agriculture that has always supported our investment here in Cambodia. In this respect, we are planning to expand the plantation areas of our rubber farms in order to increase rubber production for processing in the country,” he said, adding that the rubber plantations of the company will increase in size from 47,000 to 65,000 hectares this year. 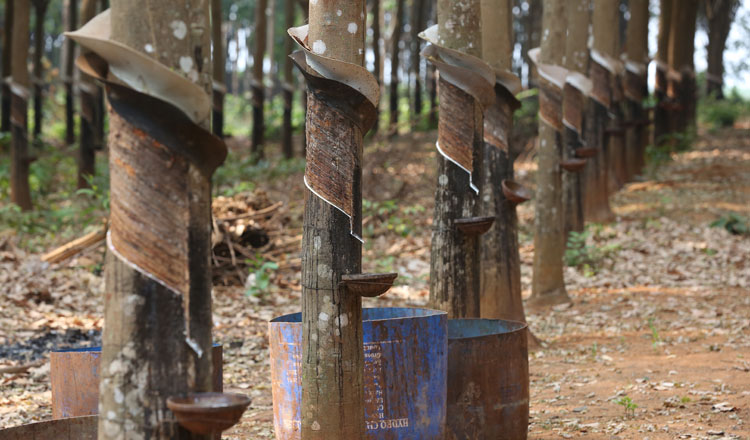 Vietnam Rubber Group operates through 19 subsidiaries in the Kingdom. Its investment is reportedly valued at about $800 million.

In 2019, the company overall exceeded by 23 percent its annual target – making an estimated $1.28 billion in revenue. However, several local sources noted that its pre-tax profit was $220.82  million – 98 percent of its target.

The commodity – which is collected from farmers in eight provinces including, Kampong Cham, Tboung Khmum, Kratie, Preah Vihea, Ratanakiri and Mondulkiri, is priced at an average $1.18  per kilogramme (kg) for fresh rubber latex, while dried rubber latex on average sells for $0.61 per kg, according to official data from the General Directorate of Rubber released yesterday.

Try Pheap, the owner of the local conglomerate Try Pheap Group, said the commodity is in high demand in the international market and a valuable investment.

The company, which has nearly 10,000 hectares granted by the government for its rubber plantation in Preah Vihea province, has invested $40 million providing 3,000 jobs for workers, Try said.

“The amount of investment includes a processing facility and other amenities within the farm and this amount will increase further as we need to expand the production,” he said. Try added the facility has the capacity to process between 20 and 30 tonnes of latex a day.

“We are now trying to produce high quality rubber latex.

“For our next move we will seek development partners to process the finished product into products such as tyres to serve demand,” said Try.

According to the National Bank of Cambodia, the Kingdom generated more than $200million last year from rubber exports last year, down 1 percent when compared with the same period in 2018.