Sacred Lotus: A haven for vegans

There are many reasons people come into veganism, but for Krishan Clark-Varma, it was a decision that he needed to make to be able to live a healthy life again. In 2016, the British-born was diagnosed with ulcerative colitis, an inflammatory bowel disease that required him to be on at least 15 different pills every day.

“It was hell. I had to take so many pills just to be able to go through my daily routine pain-free. The doctors said there were no other options but to be on medication. So I did for a bit until I grew sick of it,” the 26-year-old told Good Times2 in a recent interview.

He then continued to look for alternatives online until he discovered an article about veganism and the benefits of changing one’s diet. While he was skeptical in the beginning, Krishan decided to give it a go and he was amazed when he was able to notice the effects on his health.

“Three months into it, I stopped needing pills because my body felt good again. I’m not saying this could work for everyone but it did for me and I will never go back,” he said.

Today, Krishan and his also-vegan girlfriend Sreyneth Long, are “propagating” the positive messages of veganism through their little café-cum-homestay called Sacred Lotus, located in Toul Tompoung.

What’s unique about Sacred Lotus is that it offers a variety of plant-based fusion comfort food by using only the freshest local produce from Sreyneth’s hometown, Kampong Cham. Because of this, the couple can keep prices super affordable.

“We want to promote veganism so we try to keep the prices reasonable. The misconception is that veganism is a pricey lifestyle that is only for Westerners – which is not true. For example, we use vegetables grown along the Mekong River so they contain no pesticides and because we source locally, we can get stock for cheap. 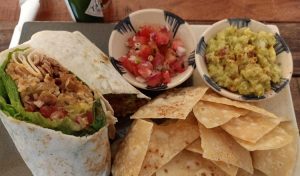 “We also offer both a Western and Khmer menu so that interested locals can come here and sample some of the revised versions of their comfort food. They will realise that vegan food not only looks good but taste good too,” Sreyneth said.

One of the best-sellers at Sacred Lotus is the Khmer red curry, prepared especially by Sreyneth using her family’s trusted recipe which has been passed down for generations. The thick, rich broth complements the rice perfectly, as the stewed vegetables brilliantly make-up for the lack of meat.

Some of the other items available on the menu include kuy teav cha (similar to pad thai), green curry with rice, tom yam with rice, fried rice, burritos, chickpea burger, mushroom burger and a selection of pizzas.

If you are fans of all-day breakfast like we are at Good Times2, you would be glad to know that Sacred Lotus also offers a full vegan English breakfast set, smoothie bowls, vegan congee, homemade muesli and toasts using Alpine bread.

Having a meal at Sacred Lotus is almost like eating at one’s own home, thanks to the warm lighting and bright decor that provide for a chill, loungey ambience. The couple also has a nice surprise for customers – resident furries await at the cafe and would warmly greet you in exchange for a pet or two.

The establishment is situated in a lovely French/Khmer-style building with beautiful authentic Khmer tile flooring. The vegan cafe occupies the ground floor while the guesthouse takes up the first floor. It also has a rooftop lounge overseeing the beautiful Russian Market.

All guests and customers are also welcomed to participate in a yoga class and guided meditation session every Wednesday, led by Rebecca who has spent seven years as a Buddhist nun and a yoga practitioner with over 20 years of experience.

Currently, Sacred Lotus is also offering a promotion dedicated especially to coffee lovers. Every Tuesday, go and grab a cup of joe for only $1. On top of that, the cafe will offer a 10% discount if you bring your food containers for takeaways, as a part of its new plastic reductions. According to Krishan and Sreyneth, they will continue to come up with different promotional activities that are more community-based to make sure that customers are always happy at Sacred Lotus.