Speaking to thousands of attendees at the 41st anniversary of the January 7 Victory Day, a day commemorating victory over the Khmer Rouge, in Phnom Penh’s Koh Pich Exhibition Centre, Mr Hun Sen said that the government firmly safeguarded peace, political stability, security, and public order in which people live harmoniously.

“Any attempts of bad elements to exercise regime change in Cambodia by unconstitutional means and againstdemocratic principles failed thanks to vehement measures taken by the Royal Government and the people’s joint forces to defend their peaceful lives and development,” he added.

Sam Rainsy was vowing to return to the Kingdom to restore democracy and human rights on November 9. However, the government has accused him and his allies of planning a coup. His planned trip failed to materialise.

Mr Hun Sen said that the government is committed to defending its independence and sovereignty.

“The patriotic spirit to defend national independence, sovereignty and territorial integrity raised high despite external pressures, while democratic process and rule of law strengthened, and everyone’s rights widened,” he said.

Mr Hun Sen said that the government is upholding democracy and the rule of law.

“Whatever attempts to distract Cambodia from democracy and rule of law by forcing it not even to implement its own laws would be unacceptable,” he said.

Mr Hun Sen said that the government has committed to defending hard-earned peace.

“We would allow no reactionary forces, at whatever price it would be to pay, to destroy it,” Mr Hun Sen said.

“Once we lost peace, we lose everything,” he said.

Mr Hun Sen noted that peace and stability bring about the economic growth of 7.1 percent a year.

Mr Hun Sen said that the Kingdom hoped to mend ties with the West which have always criticised Cambodia over an issue of human rights and democracy.

“There would be no justifiable reason for reiteration by external circles about restoring democracy and human rights in Cambodia,” he added.

“I hope that Cambodia’s relations with certain countries who used to have incomprehensive perspective on the Royal Government would be promoted, uplifted and improved and would not continue to be a hostage of the dark chapter of history,” he said, referring to Cambodia’s strained ties with the US. 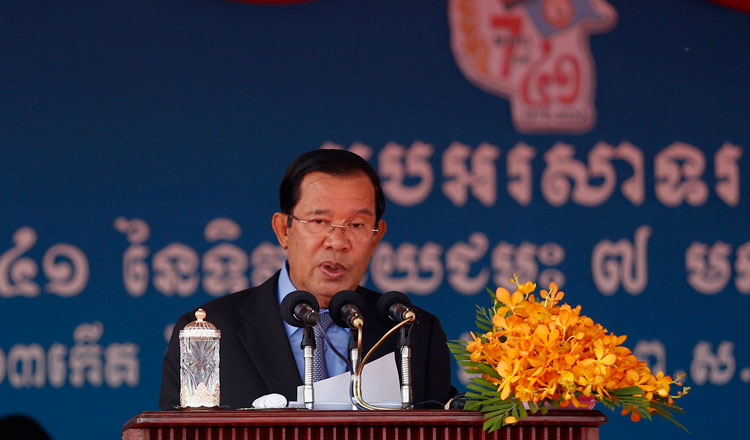 “I love peace. Peace is important for everyone,” Mr Sokvitou said.

The US Embassy in Phnom Penh yesterday posted a message on its Facebook page saying that although Cambodia went through the Khmer Rouge regime, development has taken hold.

“The Cambodian people have shown great resilience in the decades since that dark period and, through hard work and determination, have taken the country far,” it said.

“The United States remains firmly committed to supporting the Cambodian people and their aspirations for reconciliation, prosperity, democracy, and independence – and to ensuring that such a tragedy never happens again,” it added.