Millions of tourists visit developing countries every year, generating a steady stream of wasted hotel soap in the process, according to a report by Eco-Soap Bank, an NGO established by American student Samir Lakhani in 2014 when he was volunteering in the Kingdom. The NGO’s goal is to put a cap on wasted soap and help rural communities.

Five years have gone by, and ESB continues the work to help prevent soap, a form of non-biodegradable waste, from turning up in rubbish piles. Its aim today is still to reduce waste and pollution.

Mr Lux says Mr Lakhani was a volunteer for the Trailblazer Cambodia Organisation, an NGO helping poor communities in Siem Reap province when he saw a woman using laundry detergent powder to wash her baby.

“When he saw the situation, Mr Lakhani was shocked,” he says, adding Mr Lakhani had a moment of realisation upon returning to his hotel. “Once he returned to the hotel where he was staying, he saw hardly used bars of soap being disposed of by room attendants.”

“Based on these events he observed, he came up with an idea to collect used soap for reuse,” Mr Lux notes.

He says Mr Lakhani then created the ESB in collaboration with TCO to collect used soap thrown away by hotels and guesthouses so they can be recycled and donated to impoverished children in rural areas around the world.

Mr Lux says today ESB has several objectives: The first is to collect used soap, shower gel, shampoo, pillows, mattress covers and clothes. The second is to recycle them for reuse. The third is to provide soap recycling jobs, training and education to impoverished women.

“Another important goal is to help children in rural communities avoid communicable diseases through regularly washing their hands with soap before meals and after defecation,” he says. “Therefore, we offer free soap to partner organisations so they can distribute the soap we recycled to their targetted schools as well.”

“Soap is made of chemicals, so it can help kill viruses and prevent infectious diseases. At the same time, it also damages the environment,” Mr Lux adds. “When a bar of soap is thrown away at the dump, rainwater will melt it into the soil and it will affect fertility. The chemicals can also flow into lakes and rivers, which affects biodiversity in water.”

According to ESB, their recycled soaps have been donated to approximately 1.1 million children around the world, including about 600,000 in the Kingdom.

It says ESB is also registered as an organisation in the United States. The NGO operates in 11 countries, including Laos, Nepal, Bangladesh, Rwanda, Tanzania, South Africa, Sierra Leone, Lebanon, Fiji, Ghana and India.

ESB also collects used boxes, newspapers and clothes from supermarkets and hotels in Siem Reap and reuse them as soap packaging.

In a small room where ESB is running its production chain, five women aged 20 to 30 are busy recycling soap.

Soeung Ra, 31, says she has been processing soap with ESB for four years. Ms Ra says some used soap are still wet when they reach the production chain.

She says the soap are first cleaned and soaked in water to kill viruses before they are dried.

“After that, we grind the soap to become powder. We then add a small amount of water and pour the mixture into a square mould to make a large bar of soap,” Ms Ra says. “Each large bar of soap weighs 900 grammes, so it has to be divided into eight or 16 pieces. We then dry the pieces, but not under sunlight.”

“The used soap we collect are in different colours and forms – some are white, pink, blue, green and brown – so the recycled soap are sorted according to their colour,” she adds. “But if we wanted colourful soap, we would mix all the colours.”

Ms Ra says after the soaps dry, they are shaped to have smooth edges before being put in packaging and distributed to partner organisations.

Vy Chenda, 23, says at first she did not have the skills to process soap, making work difficult. However, ESB’s training has been able to provide the needed skills and equipment to process recycled soap.

“I choked due to the smell of soap a little bit at first because I was not used to the powder during the grinding process,” Ms Chenda says. “However, after some time it has been better because I am used to it. I can continue to work and absorb skills and income to improve my family’s living condition.”

“We regularly replace soap every day. Some guests only use a little bit of the soap provided by the hotel so it would be a waste if the soap were thrown away,” she says. “If there is a place to take those used soap for recycling…we are happy to collect them.” 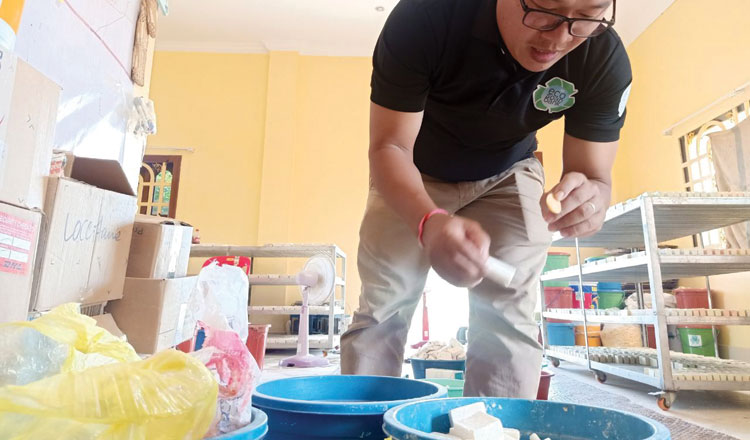 Earlier this year, the World Food Programme began supporting ESB by purchasing 100,000 bars of soap and distributing them to schools under their school meals programme.

WFP country director Francesca Erdelmann says aside from providing meals, WFP teaches children on how to properly wash their hands.

“It is very important for the school children to be able to wash their hand before they have their meal and also after,” she says.

“So this is a social programme implementation that we have, including the provision of nutritious food at schools and teaching children about hygiene practice through washing hands with recycled soap, which is also a part of promoting the environment in Cambodia,” she adds.

“The ministry encourages this recycling [initiative] because children in communities use [the soap],” Mr Pheaktra says. “It also contributes to the environment.”

ESB is currently planning to expand its operations in Phnom Penh and Banteay Meanchey, Svay Rieng and Preah Sihanouk provinces.

However, Mr Lux says some people do not realise the value of recycled soap.

“In Cambodia, people do not really value recycled soap because it is considered waste from hotels or guesthouses – we also use boxes and newspapers that were thrown away to package the soap,” he says. “Some people are less interested and some people prefer to use shower gel or soap suitable for their skin. It is difficult for us to enter the market.”

He says civil society organisations should help by supporting recycled soap and getting in touch with ESB to help.

“We want to encourage more production and use of recycled soap because once people use it, they will be interested in the environment they live in…which is part of improving the environment on our planet.”