Home - Tinky – a new alternative to save Mother Earth

Tinky – a new alternative to save Mother Earth

Phnom Penh is a small capital where its roads serve almost five million vehicles daily. The rising of gas consumption via these vehicles has become a major health concern to people living in the urban areas.

Concerned about the impacts of air pollution, Khemera Kimhak and Souen Chanratika came up with idea of an alternative vehicle which made the switch from gas-fueled to electric-fueled bikes. This is how ‘Tinky Bike’ came to be. ‘Tinky Bike’ is an electronic bicycle made to replace motorbikes in Phnom Penh, a brilliant idea from the two junior architecture students.

When asked about the reason behind their green business idea, Kimhak said that it emerged from problems that he personally faced in his daily life. “Every day I drive around where the air is heavily polluted. This was a results of vehicles on road. My throat used to be sore all the time due to the air pollution.

“It is not even a cheap. I used to run out of money just to refill the gas. That made me think about an alternative idea to change the vehicle trend in Cambodia,” said the 20-year-old Kimhak, whose role in Tinky includes being the mechanic, electrician and designer. He said that in order to fix the air pollution problem, people need to stop using vehicles that consume gas. However, since transportation is a basic need, Tinky Bike founders tried to search for an alternative option that will not further harm the environment.

The two founders of Tinky Bike later conducted further research on the tools to replace gas-fueled vehicles and make it convenient for a single user.

“The original plan of Tinky Bike is to make the design and function similar to motorbike so it can be used to completely replace motorbike,” said Kimhak. Before inventing Tinky Bike, they used to think about using an electronic skateboard but because it could make it difficult to ride when you have a lot of stuff to carry, the founders crossed the idea out.

Tinky Bike is not only for reducing air pollution in the capital but it also gives people the option to be financially-savvy.

“I remember that every day I had to spend at least 8,000 Riels ($2) on gasoline when I ride motorbike and as a student, we don’t have the financial luxury of spending that much every day,” he said.

He added that by riding a Tinky, he can save up to 7,000 Riels in a day as you would only need to spend 700 Riels for a 60-kilometer ride. For students with restricted budget, it is a good way to save money on transportation expenses.

The difference between Tinky bikes and others is its striking modern design which came straight from the brilliant minds of Kimhak and Chanratika. You can customise the colour according to your liking, if you pre-order a Tinky bike. The additional benefit is that Tinky offers a lifetime warranty on the bike body and free checking service. With Tinky bike, you will also get up to two years warranty on the battery life.

The first Tinky bike had just finished its production in December and has bagged a $3,000 awards from Smartspark for a business idea that is rare and unthinkable by many.

“Not so many people believe us at the beginning. Even our parents had doubts,” said Mr. Kimhak. He said that despite disheartening comments, they still continue with their business plan because they both have faith in their creation. They started sketching the prototype of Tinky in October, then started the building process using the money that they earned from their part-time and freelance jobs. 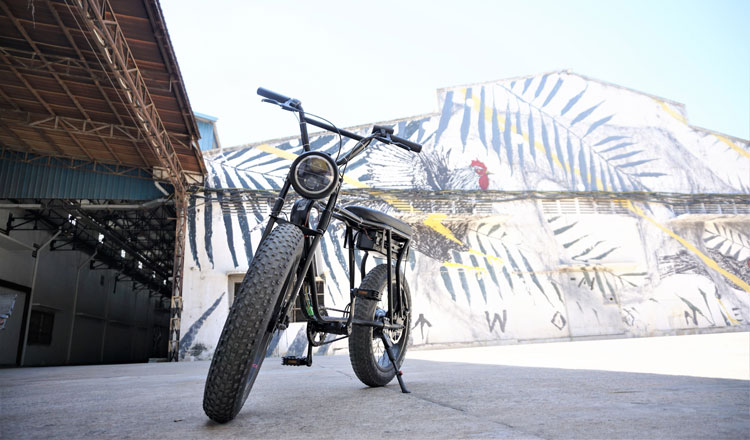 After three months of waiting for the spare parts to ship from China, Kimhak and Chanratika started building the whole bike by themselves. Thanks to the help from their friend who is a bicycle lover from France, they successfully built Tinky bike within just four days.

“We will continue on until we can change the city into becoming a place where electronic bikes can replace motorbikes and our city will become pollution-free. Even though we can’t give an exact date of when we can completely change the drivers’ behavior in the city, we hope that we can make it happen little by little.

“So far there are already some people who have contacted us because they are interested in the electronic bicycle. This is proof that we are not the only people who want clean air in the city, there are many people waiting to join us,” said Chanratika.

What does Cambodia Book Fair mean to you?

10 ideas for a jolly Christmas