Mr Jamaludin along with Thomas Hundt, CEO of Smart Axiata and Asri Hassan, Group Chief Corporate Officer of Axiata Group, made a courtesy call on Mr Hun Sen at the Peace Place, with the prime minister asking the company to provide internet services to schools and hospitals.

Speaking to reporters after the meeting, Eang Sophalleth, personal assistant to Mr Hun Sen, said that the prime minister thanked Mr Jamaludin as well as the company for contributing towards the development of the Kingdom. 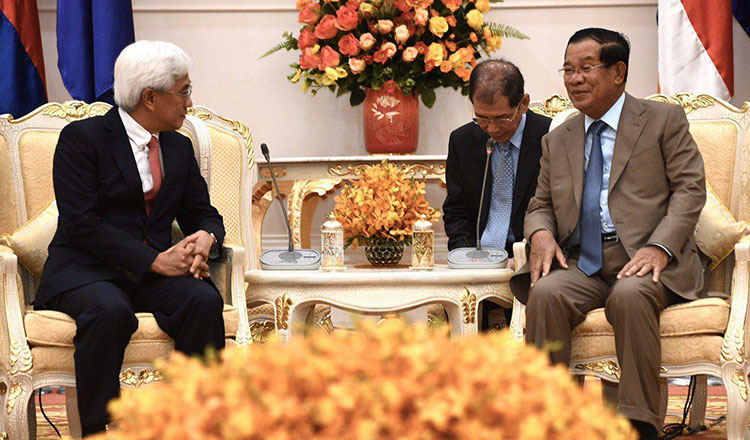 “He also requested the company to consider expanding its mobile broadband to most of the rural areas because Cambodian people, especially students are in need of this technology to benefit their studies,” he said.

Mr Sophalleth said that Mr Hun Sen asked the company to provide internet services to hospitals and schools so that teachers and students can get access to internet for their studies and research.

He noted that Mr Jamaludin told Mr Hun Sen in the meeting that Smart Axiata has invested over $1.42 billion in capital.

“He said that Smart Axiata’s investment does not only earn income but also contribute to develop the Kingdom’s economics and society, such as education, healthcare, environment and sports sector,” Mr Sophalleth said.

According to the company’s statement issued after the meeting, both sides discussed key milestones to further propel the country’s digital economy, including 5G prospects and potential measures to expand mobile broadband in rural areas.

“These echo well with the new generation of young Cambodians who have rapidly embraced ICT and digital technologies, as well as Samdech Techo’s vision of leading the way in Asean and bridging the digital divide at rural areas,” it said.

By the end of 2018, Smart had invested over $1.42 billion in capital as well as operating expenditure, and paid over $370 million in taxes, levies and regulatory fees, it said.