To prepare its young generation for the local, regional and global business and labour markets is an endless mission of the government, particularly the Ministry of Education. In an exclusive interview with Khmer Times, Minister of Education, Youth and Sport Dr Hang Chuon Naron, who is the man behind many reforms in Cambodia’s education system, highlights his institution’s effort to include advanced technologies in learning and teaching in response to the emergence of Industry 4.0 in the country

Industry 4.0 has now become a jargon in the education sector. In this aspect,  how has learning for students in both urban and rural areas in Cambodia been affected by  the latest industry revolution?

Dr Naron: Industry 4.0 is a new phrase of industrial revolution based on the application of digital technology and automation. For example, self-drive vehicles, robotisation, smart buildings and cities, advanced software for management and so on. In response to this trend, the development of human resources plays important roles, particularly in creating human capital with practical knowledge, technical skills and soft skills which include critical thinking, problem-solving, teamwork, and ability to present one’s idea, plus good behavior and social responsibilities. In addition, we need good collaboration between those with technical knowledge and those with social science expertise to solve problems faced by a nation.

Part of our reform is the creation of New Generation Schools, starting  with the Sisowath High School and which has now  spread to 11 other schools, as well as the New Generation Pedagogical Centre to train teachers in adapting modern technology into their teaching. We also link schools to higher education institutions. We have invested in educational technology at Institute of Technology of Cambodia (ITC), where we will create the Centre of Digital Education, and the Royal University of Phnom Penh. We also created a multimedia centre in our IT department to produce digital content for students.  The Ministry of Education is also investing more and more on building computer rooms in schools to allow students to learn computer skills, such as coding and programming, and use the Internet. With our partners, especially Smart Axiata, Google and Facebook, we have been promoting good digital citizenship and digital literacy.

We are also shifting our teaching approaches, from the model focusing on memorisation (tote learning) to the one relying on analytical, experimental and pragmatic learning. 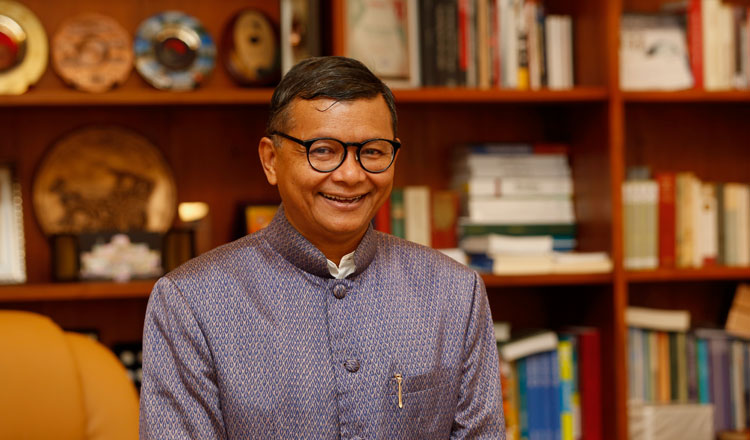 When will Cambodia be ready for Industry 4.0 while the country’s performance in Industry 3.0 currently remains restricted?

Dr Naron: To be ready for Industry 4.0, our country needs infrastructure. But, we cannot wait for all schools to have modern facilities and equipment. In the fields that we can head forward, we have to start it now. For instance, the government has invested millions of dollars on the infrastructure of New Generation Schools, e-library, teacher training and Information Technology inclusion in the classroom. More importantly, we are cooperating with private companies which are also focusing on digital technology. Although we have just begun, we are changing teaching methodology to respond to the requirement resulting from economic development.

As the head of education sector in Cambodia, how do you expect  education officials and students to respond to the emergence of IR 4.0?

Dr Naron: Everyone has to be involved. We are training our educational staff, to ensure they understand the whole concept of digital education. Next year, in March to be specific, the main topic of the Education Conference is digital education. We choose this topic to inform educational staff, especially teachers and school principals, of the emergence of industry 4.0. We are going to host a discussion forum on issues such as the guide map and strategic plans, especially the one aimed at promoting online teaching, recording digital lesson videos, investing on infrastructure, revising learning programmes and so on. Collaborating with Smart Axiata, we also organise business plan competition focusing on digitalisation to drive our young people’s participation by asking them to solve problems using modern technologies and lead them to creating their own business. We hope that in the future more of our youth will have smartphones. Also, we encourage the creation and development of smartphone apps targeting provide digital lectures and contents, particularly for learning English, the language of technologies and sciences.

What changes have you seen in Cambodia’s education sector since you were appointed Minister of Education?

Dr Naron: In 2013, when I was appointed to my current post, I and my colleagues conducted an observation of the challenges in the education sectors, and as a result, we set 8 priorities: quality, the national high school leaving exam (BacII) reform, skill training, soft skills, sport reforms, staff supervision, financial reform, and educational research. The reform in the national exam make students study harder and teachers teach better. Although in the first year of the reform, the passing rate dramatically fell, it went by 68 percent this year while the number of the candidates who obtained grade A increased from 11 in 2014 to more than 400 in 2019. Teachers’ minimum salary has been raised to 1,200,000 riels (about USD300), a three fold  increase compared to 2014. The ministry has also been enhancing school and classroom management, giving more responsibilities to teacher and school principals, as well as to local authorities and parents. Students and their parents welcome our hard work. We have been producing more qualified workers for the private sectors and more qualified teachers to teach future generations.

The knowledge gap today between  the youth in Cambodia and youth of other ASEAN member states seem to be wide. What needs to be done to narrow this gap?

Dr Naron: As we all know, Cambodia has just gotten over from a civil war which lasted  decades. It is hard to compare our-selves with other countries in Southeast Asia, such as Singapore, Indonesia and Malaysia, which did not face war during the same timeline. However, in the last 20 years, Cambodia has almost tripled its budget for education sector, thanks to the cut in budget for security and military. Because of these, all indicators in the education sector have shown positive changes. For example, the proportion of children who go to primary schools increased from 87 percent in 2000 to 98 percent today while those in junior high school and high school increased by 57 percent and 30 percent respectively. While in 2000, less than one percent of our population did not attend universities. The rate today, on the other hand, is about 15 percent. Some students have shown remarkable success in international competitions, such as the Olympia. Regarding higher education, our Institute of Technology of Cambodia has been recognised not only regionally but also globally. 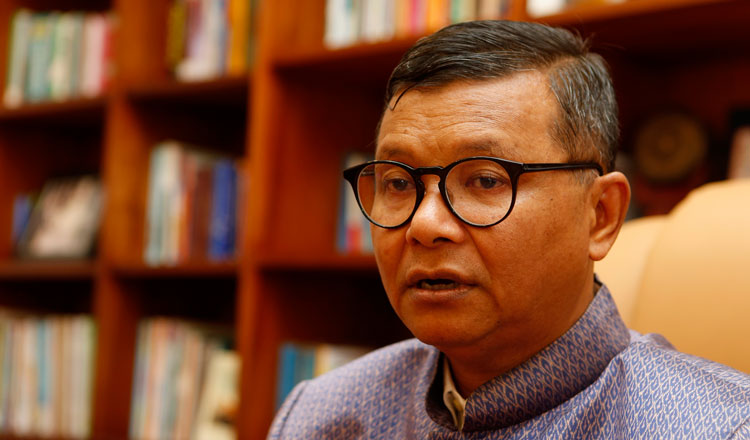 All of these are significant improvements in our education services. But we also have many challenges to deal with. One of them is the threat to peace. Any war or conflict can have serious impacts on education, and the Ministry of Education supports any means to maintain peace and stability in the country.

The education sector receives the biggest share of the national budget in 2020 compared with other sectors. How is the ministry planning to use it to promote digital education?

Dr Naron: The main reason for such a big share is our 130,000 teachers all over the country, almost 60 percent of total public service workers. Since the government has already tripled teachers’ salaries, about 80 percent of our entire budget goes to that. To promote teachers’ living standard is one of the government’s top priorities. Secondly, the budget needed to run schools has also been increased. In order for the schools to respond to industry 4.0, each school needs more money to pay for computers, electricity and clean water. Thirdly, we need to invest further on infrastructure. In the last three years, Samdach Decho Hun Sen, Prime Minister of Cambodia, invested some USD300 million on school buildings. Modernisation of infrastructure is a ‘must’.

What plans does the ministry have for the future or to be specific, in the next 10 years?

Dr Naron: Technology is growing so fast, and in order to catch up with it, we need to train our students how to learn by themselves effectively, and to have great technical skills, soft skills and language skills. Meanwhile, we also need to teach them how to become good Cambodian citizens and good digital citizens, who use modern technology to solve problems of their society and the world.

What is your message to the youth?

Dr Naron: The youth is an important pillar of the nation. In order to become one, they must be equipped with knowledge. They are general knowledge, language knowledge such as English and other languages, vocational skills, and comprehensive knowledge. Youth themselves need to stay active in social problem-solving, taking part in job creation among youth, having good solidarity and respect national identity.

Tech rising stars you should know