Vietnam’s dominance of Cambodia in football has yet to end, with the Group B leaders routing the Angkor Warriors, 4-0, in the semifinals of men’s football in the 2019 Southeast Asian Games at the Rizal Memorial Stadium.

Despite Cambodia’s best efforts, the Kingdom fell short against its neighbour to the east to the disappointment of its fans who were hoping for a ’miracle’.

The wards of Park Hang-seo immediately jumped into attack, but could not break through the Cambodian backline until the middle of the first half.

Six minutes later a defensive miscue by defender Yue Safy allowed Chinh to rifle in a goal past the outstretched hands of Soksela for a 2-0 Vietnam lead. The Cambodians, meanwhile, could not convert the few scoring opportunities offered to them in the first 45 minutes of the match.

Another goal by Chinh in the extra period of the first half further padded Vietnam’s lead. The first half ended with Vietnam on top, 3-0.

In the second half, the charges of Felix Dalmas attempted get back into the game, but were turned back every time they went into attack.

The Vietnamese, meanwhile, did not let up on their attack and threatened once more late in the second half. Safy committed another blunder that sent the ball into the Cambodian goal for a 4-0 Vietnam lead.

Cambodia’s wonder duo of forwards Keo Sokpheng and Sieng Chanthea, who were instrumental in the Angkor Warriors’ prior victories, were stymied by the Vietnamese backline this time.

Underdog Cambodia has captured the hearts of many fans across Southeast Asia with its gutsy performance and never-say-die attitude.

Nevertheless, Vietnam’s victory was expected by many football aficionados who pointed to Vietnam’s splendid record in the sport.

Cambodia, meanwhile, has not reached the semifinals in more than 60 years.

In head-to-head matches between the national teams of both countries in the last two years, Vietnam almost always emerged on top. 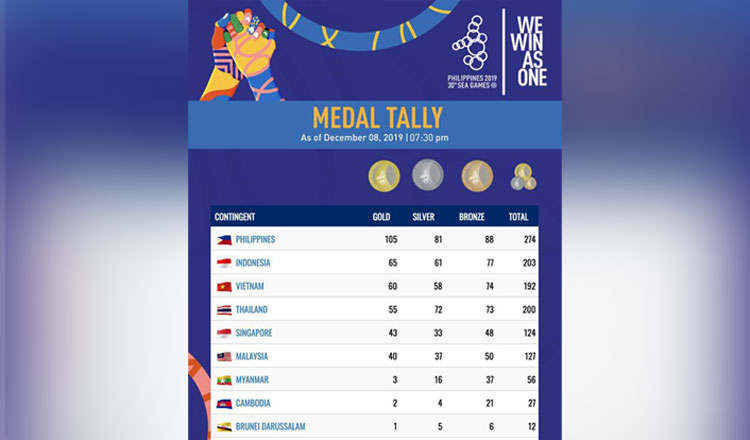 Vietnam also beat Cambodia twice in the Asian Football Confederation group stage two years ago. The first one at Phnom Penh in September was a close shave, with Vietnam edging Cambodia, 2-1. The next game at Hanoi on October 2017 was a rout, with Vietnam scoring a 5-0 victory.

Vietnam will play Indonesia in the finals, while Cambodia and Myanmar will battle for the bronze medal. Indonesia overcame Myanmar, 4-2, in the other semifinal match played at the Rizal Memorial Stadium.

While Myanmar is a slight favourite after it beat Cambodia, 2-1, earlier in the group stage, the third-place match is expected to be close. A win by Cambodia will be its best finish since 1959.