IT was a perfect moonlit night on opening day at Villa Grange last Friday, when pulsating Cambodian rock from the golden age of the 60s and 70s floated across the swimming pool as Australian musician Julien Poulson orchestrated his psychedelic ‘Cambodian Space Project Mothership’.

That retro burst marked the beginning of three days of the Garage Fest at four venues – Villa Grange on Street 244, Wang Dang Doodle on St 240, The Hangout on St 450 and Sundance Inn on St 172 – to give Phnom Penh music folks a good time that’s still buzzing. The main buzz was a hybrid of punk, rock ‘n’ roll, groove metal, folk and blues – quite representative of the current state of the city night scene.

Other foreign bands invited to rock the weekend of Nov 15-17 included Shanghai-based punks ‘Round Eye’, ‘Space Party’ from Canberra, Australia, ‘Ballychunder’ of Hong Kong with its folk punk and a refreshing outfit from Malaysia called ‘Mothflesh’ cranking out Groove Metal.

On the kind of audience that the Garage Fest attracted, Mothflesh commented on the fans they met on their debut outing in Cambodia: “The audience (at ‘Oscar on the Corner’) did not look like straight metal-punk rockers coming to hear a band with the same sound. We noticed that we appeal to broad music fans in general, (unlike in Malaysia where head-banging metal fans would congregate on Mothflesh for the night). Google: Mothflesh album ‘Gravity Kings’ (debut video in July 2019).

And of the inscrutable audience in Mainland China, Jimmy Jack of ‘Round Eye’ (this punk rock duo is not Chinese but are foreigners based in Shanghai) provided a candid answer on the R-E website: “Some nights (in China) we play to a fun-loving packed house. Some nights we play to 20 disinterested businessmen. Some nights we play in front of people too drunk to remember. And some nights… we suck.” (sounds like great lyrics).

Julien, who is the creative genius behind ‘Garage Fest 2019’ — and also founder of Cambodian Space Project (CSP) — shares his review with Good Times2 readers. Julien’s take: “Personally, I’m absolutely thrilled with the way Garage Fest! panned out. It was an incredible – long weekend – of great music and comradery of creative artists, musicians and of course, the audience. I’ve been working with music events in Cambodia for over 10 years now and in that time I’ve seen the scene grow and develop but this is a new experience by the way it brought in a lot of different talent to showcase just how much is really happening across the region.”

What about next year’s Garage Fest? “We’ll do this all again and will be looking at Garage Fest! As a portable festival that will pop up in other cities across the South East Asian neighbourhood,” added Julien.

Julien is also an accomplished lead-rhythmist playing a mean-looking silver Gibson. “I especially loved this event because as a musician, it also immersed me fully into all the cool sounds, songs, styles and cultures that each and everyone one of the acts totally delivered in their shows – awesome performances across the programme and lots of surprises… I even found myself drumming – with just a bottle of Tabasco sauce as a drum stick (see pic) – out on the street in a totally random moment with Captain Future & The Jams (UK) – by the end of that moment, the Tabasco bottle had broken and I was soaked in the stuff… can still smell it!”

On how Mothflesh broke into the Cambodian circuit for the Garage Fest, it was largely diligent calendar planning on the part of the Malaysian band consisting of a young quartet (plus a manager). 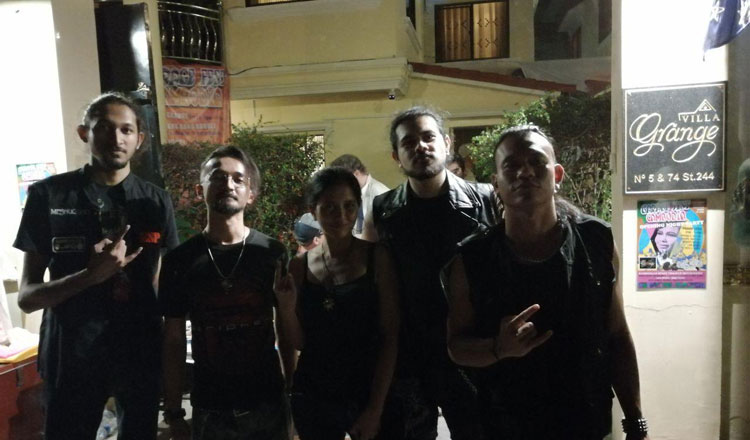 “They approached me and as soon as I checked out their work online I could see that they’d be a great addition to the programme. I really was even more surprised by their live show – totally blew me away and they also blew out the power (a blackout) at Saturday night’s show… unfortunately it was ‘lights out’ for about 2 hours but eventually the owner managed to rewire everything and it was back on… many people had already left but a flash mob came back around 11pm and we got great shows by ‘Space Party’ (from Canberra), mind-blowing Chachy and his band ‘Round Eye’ from Shanghai, and Captain Future (and the Jam) doing the graveyard shift early a.m. – amazing night!

So who was sponsor who paid for the flights of fancy to showcase these selected bands in Phnom Penh? “I didn’t bother (to find sponsors), actually, I didn’t really want it a corporate sponsor thing – no logos etc – but Garage Fest! really grew out of the radio show ‘Asian Garage Underground’ that I have been hosting on Kampot Radio and I guess that’s the connector for all this,” said Julien.

So ye faithful radio is in the picture too. But sponsors, are they hard to come by? “Sponsors are and aren’t hard to come by but it does take work to reach out and match-up the right project with the right kind of sponsors. Many of our (CSP-M) projects such as the latest production ‘Cambodian Women of Song’ are supported directly for the community of people out there who are generous, applaud and see the value in this work,” Julien concludes, before CSP Mothership brings the city sounds to the next chapter around Christmas perhaps.