The international community is rallying behind Kem Sokha to have the political rights of all former CNRP members and activists restored after a court eased his bail restrictions on Sunday.

Mr Murphy after meeting Sokha on Monday urged the government to drop Sokha’s charges and lift the political ban on all former opposition party members and activists.

“This move was made by the authorities yesterday [Sunday] and it’s a step forward,” he said. “However, we think it is very important to see more and our advice as a friend of the Kingdom of Cambodia is that the authorities find a way to restore Kem Sokha’s entire freedom and liberty and drop the charges against him.”

Phnom Penh Municipal Court on Sunday eased Sokha’s restrictions after spending more than two years investigating his treason case. It said the decision was made after considering Sokha’s health and good behaviour over the past two years.

Sokha remains under court supervision, though he can now leave the former confines of a four-block radius around his home and also hold meetings.

However, he remains banned from leaving the Kingdom, engaging in political activities and is obligated to appear when summoned by the authorities.

Sokha was arrested in September 2017 for allegedly colluding with the US to topple the government. He was charged with treason and the former opposition CNRP was dissolved by the Supreme Court in November 2017.

Mr Murphy noted many former CNRP members and activists since then have been denied their political freedom and liberties.

“I regret that his [Kem Sokha] liberty has been denied for the past two years,” he said, adding former CNRP members and activists must be able to participate in politics.

“We believe that this is really very helpful for Cambodia for governance and the economy that all voices can be heard to participate to make [Cambodia’s democracy] stronger,” Mr Murphy said.

Sokha told reporters after the meeting with Mr Murphy on Monday that he should not be barred from participating in politics.

“I like journalists and I like to meet the people, but unfortunately, I am banned from engaging in political activities,” he said.

The easing of Sokha’s restrictions was made amidst the European Commission’s review of the Kingdom’s Everything-but-arms trade status.

The EC yesterday reported it has finalised a preliminary report on the possible temporary withdrawal of the EBA.

“The European Commission sent today to the authorities of Cambodia a preliminary report outlining the findings of the investigation triggered in February 2019 under the procedure for a possible temporary withdrawal of the EBA trade preferences,” it said. “Cambodia now has one month to react to this preliminary report. The Commission will then finalise the report and [decide] in February 2020 on whether or not to temporarily withdraw Cambodia’s tariff preferences.”

Maja Kocijančič, spokeswoman for the European Union’s Foreign Affairs and Security Policy, in a statement on Monday echoed Mr Murphy.

Ms Corcoran said the easing of Sokha’s restrictions was “a positive development”. She said, however, the government must be fair to Sokha. 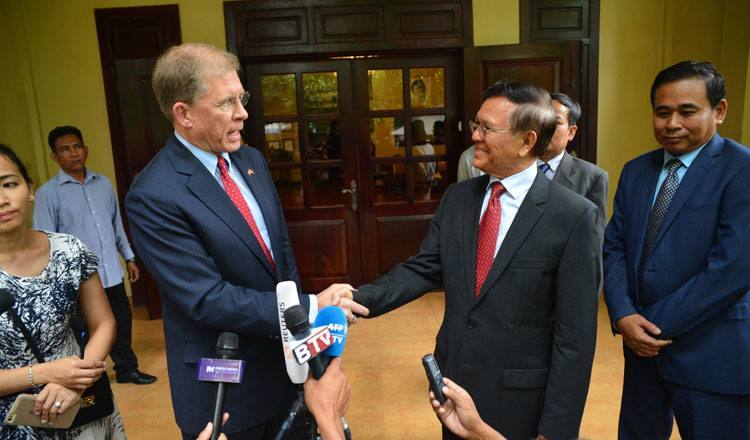 “It is a positive development, however, you’re [Sokha] remained unable to participate in political activities, so we look forward and urge the government resolve your case properly and fairly,” she said.

Justice Ministry spokesman Chin Malin yesterday said it is up to the court to set Sokha free.

“They are appealing, but we are following court procedure,” Mr Malin said. “Kem Sokha cannot have full political rights like others because he is under court supervision…while his case is still under investigation.”

“It is up to the court to have his charges dropped or upheld,” he added.

Rhona Smith, the United Nations human rights envoy to Cambodia, on Monday welcomed the easing of Sokha’s restrictions, but said more must be done.

“The lifting of Mr Sokha’s house arrest is a progressive development, however, I regret that the court order continues to limit his civil and political rights, in particular, his freedom of movement and freedom of association,” she said. “I reiterate calls for the swift conclusion of the investigation into Mr Sokha’s case or for the charges against him to be dropped,”

The Permanent Mission of the Kingdom of Cambodia to the United Nations Office on Monday said Ms Smith “renewed a baseless demand for individuals in conflict with the law, despite the latest positive development on the ground.”

“The Permanent Mission of the Kingdom of Cambodia would like to remind the Special Rapporteur of her mandate, which is to assist Cambodia in the promotion and protection of human rights through dialogue and cooperation, on basis of the principles of impartiality, objectivity, non-selectivity and non-politicisation,” it said. “The Special Rapporteur is not a judge to rule for any acquittal.”

Political analyst Lao Mong Hay yesterday said the easing of Sokha’s restrictions was made to divert public attention from Sam Rainsy’s planned return to the Kingdom over the weekend.

“The timing suggests it was meant to divert public [attention] away from Sam Rainsy’s remarkable rise in stature with his planned return for November 9,” Mr Mong Hay said. “It is to play Kem Sokha against Sam Rainsy.”