The Boeung Ket football club beat Preah Khan Reach Svay Rieng in a thrilling final match on Wednesday evening at the Smart RSN Stadium to win the crown in the 2019 Hun Sen Cup.

Svay Rieng lost the game despite having a higher possession rate (61 to 31 percent) and shots on the goal (25 to 9).

Forward Mon Vannda opened the scoring for Boeung Ket with his goal in the 47th minute. Svay Rieng went scoreless before Nub Tola’s goal in the 70th minute.

The game was tied 1-1 after 90 minutes, leading to the first extra period. Both teams failed to score in the first and second extra periods, sending the game into a penalty shootout to decide the winner.

Svay Rieng initially appeared to have the upper hand after Prak Mony Udom slotted the ball into the goal out of reach of Boeung Ket goalie Hul Kimhuy for a 1-0 lead.

But forward Mat Noron immediately came up with the equaliser for Boeung Ket. After Kimhuy successfully deflected a penalty kick by forward Sok Samnang, midfielder Ly Mizan scored to put Boeing Ket ahead, 2-1.

The shootout was tied again, 2-2, after Svay Rieng defensive midfielder Soeuy Visal slotted the ball into the right corner of the goal while Kimhuy dived to his left. 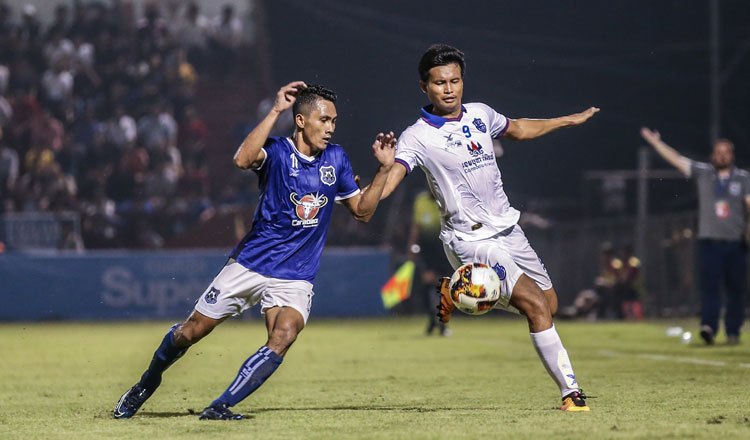 Boeung Ket’s defensive midfielder Hong Pheng scored to give his team the lead once again, 3-2. Svay Rieng goalie Aim Sovannarath correctly guessed the direction of the ball, but was unsuccessful in blocking or deflecting it.

But Svay Rieng midfielder Soun Sovan equalised with his own successful conversion that saw the ball sail right past Kimhuy into the goal as the Boeung Ket goalie dived the other way.

With both teams having four successful penalty conversions each, all eyes were on Boeung Ket defensive midfielder Ly Vahed as he stepped into the field for the next attempt at the goal.

Aim Sovannarath guessed correctly where the ball was heading, but the ball slipped past his outstretched arms into the goal as Boeung Ket went ahead, 5-4.

Kimhuy who have some spectacular saves earlier, was the man of the hour for Boeung Ket as he successfully deflected midfielder Hoy Phallin’s penalty kick for the winner as their fans went wild at the stands.

Boeung Ket officials, players, and fans were ecstatic and celebrated at the field as the team received the championship trophy.

The loss was especially disappointing for Svay Rieng, the winner of four Hun Sen Cups in the past. Svay Rieng won the crown in 2011, 2012, 2015, and 2017 editions of the annual tournament.

Svay Rieng’s head coach Conor Nestor earlier told the local media that they were focused on winning the crown, but his team’s efforts went south with many wasted opportunities at the goal.

“The whole team is focused on the game. We wants to win this trophy to get the job done this season,” he said prior to the championship game.