Every year, villagers who produce pounded rice look forward to a spike in demand during the Water Festival in November. This year, they are looking forward to bumper sales of their Ambok thanks to a unity-initiative by Prime Minister Hun Sen who has called for a Kingdom-wide consumption of the traditional delicacy during Independence Day tomorrow.

One of them Phich Kheang, 54, started selling Ambok two years ago to supplement the family’s income while her husband works at their farm.

“We can produce about 20 kilogrammes up of pounded rice per day,” Ms Kheang says. “We can earn between about $12.25 and about $24.50 per day and sometimes even about $49 if business is really good.”

She notes that every year during the Water Festival business is good, but this year she expects to sell even more after Prime Minister Hun Sen urged people to hold pounded rice-eating ceremonies during Independence Day to protect the nation, religion and the King.

“I was very happy when Prime Minister Hun Sen announced that people should hold pounded rice-eating ceremonies on November 9,” Ms Kheang says. “I think that my sales will be even better this year.”

She notes that she buys a kilogramme of rice for about $0.34 and produces pounded rice to sell daily except when she is ill or is busy doing other things.

“I sell a package of three condensed milk cans filled with pounded rice for about $1.25,” Ms Kheang says. “I buy about 90 kilogrammes of rice daily and the Ambok I produce from this can earn me about $12.50.

Ambok or pounded rice is made from rice that is harvested neither too ripe nor too green, fried dry in a clay wok, pounded with a large mortar and pestle and then winnowed to get rid of the chaff. Locals eat it either mashed up with bananas or soaked in green coconut milk with its soft meat.

Another seller Eath Tieng, 67, says he and his family have been producing and selling pounded rice for more than ten years, at first manually and now with a pounding machine.

Mr Tieng says that after the Prime Minister’s announcement, several civil servants have ordered pounded rice from sellers in the commune.

“They ordered between 500 and 5,000 cans of pounded rice from each seller for the pounded rice eating ceremony on November 9,” he notes. “We charged about $0.37 per can.”

Mr Tieng says that the money his family earns by selling pounded rice helps to pay for his children’s education.

“The money I earn from pounded rice sales is helping my son study at a university in Siem Reap province,” he adds. 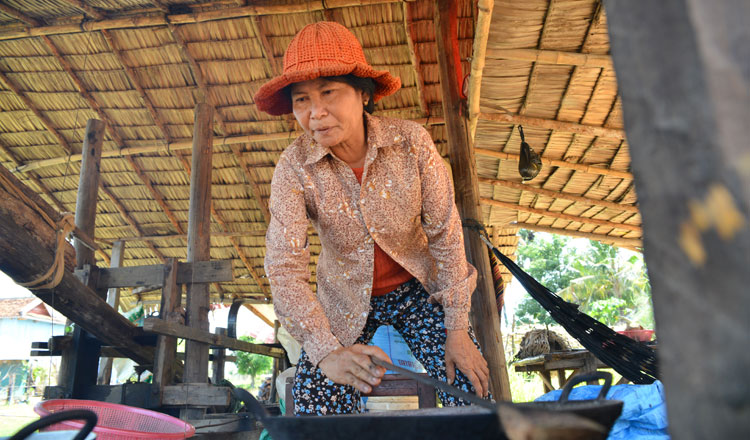 “I think that Prime Minister Hun Sen’s announcement to eat pounded rice together on Independence Day will help to promote the tradition,” he says.

He adds that that he does not know much about politics but he has heard that Sam Rainsy, the former head of an opposition party, had announced that he will come to Cambodia and made an appeal to the people and armed forces to support him in toppling the government.

“I want Cambodia to remain peaceful and stable and don’t want have a civil war again like during the Pol Pot regime,” Mr Tieng adds.

Speaking during a graduation ceremony on Koh Pich in Phnom Penh on October 2, Mr Hun Sen called on all people to eat pounded rice for solidarity tomorrow.

“They conduct a campaign to overthrow the government while I conduct a pounded rice-eating campaign,” he said referring to Rainsy’s plan. “This Ambok campaign is to protect the nation, religion and the King.”

Rainsy, who is currently in exile, has been vowing to return in order to restore democracy and human rights in the Kingdom. He has said he will return tomorrow.

He recently launched a “nine fingers” campaign online to bolster support, which the government considers a plot to stage a coup.

“We ordered nearly two tonnes of pounded rice for the rice-eating ceremony,” he notes.

“The pounded rice-eating ceremonies on November 9 is aimed at promoting solidarity to defend the nation, religion and King,” he notes. “We are organising these ceremonies to counter a movement that wants to topple the government.”

He believes that they must have started a very long time ago, noting that rice cultivation began around 4,000 to 5,000 B.C.

Mr Manara says history books also state that during the Angkor era, King Jayavarman VII first organised a Water Festival to mark his army’s victory against an enemy and  the festival included rice production activities and other ceremonies.

“I do not know when Ork Ambok Celebration or pounded rice-eating ceremony first started but I believe it happened a long time ago,” he notes.

He said the biggest event will be held at Wat Phnom in Daun Penh district but did not mention how many people were expected to attend.

“The purpose of the pounded rice-eating ceremonies is to protect the nation, religion and King from the opposition group that wants to topple the government,” Mr Measpheakdey notes.

Kingdom to spend nearly $60 billion on development until 2023