Russia will send a delegation to the Kingdom to work on converting some of Cambodia’s $1.5 billion debt into development assistance.

Russian Prime Minister Dmitry Medvedev on Sunday disclosed this when he met Prime Minister Hun Sen on the sidelines of the 35th Asean Summit and Related Summits under the theme “Advancing Partnership for Sustainability” in Bangkok.

“Both leaders discussed the old debt that Cambodia owed Russia, and both nations have agreed in principle [to converting it],” he said. “The Russian prime minister agreed to send a delegation to the Kingdom soon to resolve the debt issue.”

Mr Kim Hourn noted that both countries have been discussing the issue for several years.

“The Russian government agreed to convert some of the debt into development assistance,” he said, without disclosing how much of the debt would be converted.

During a meeting in Brussels on October 18 last year, Mr Medvedev had informed Mr Hun Sen that Russia would recategorise some of the debt owed by Cambodia. 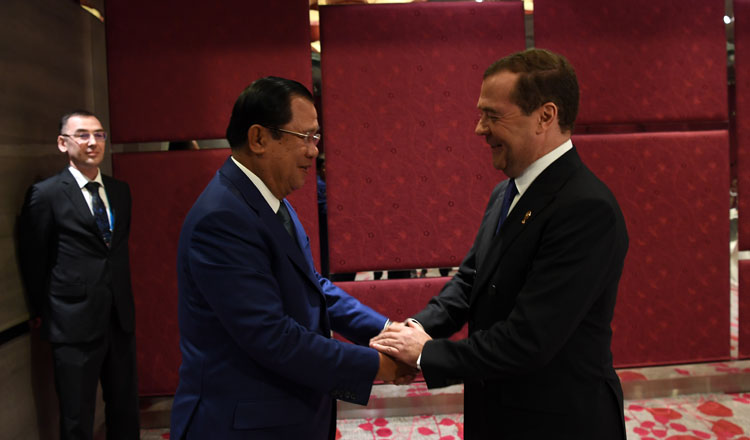 During his meeting with Mr Medvedev on Sunday, Mr Hun Sen also requested the Russian government to support Cambodia’s bid to become a member of the Eurasian Economic Union in order to expand the Kingdom’s markets and the Russian Prime Minister expressed his support.

He said Mr Medvedev also congratulated King Norodom Sihamoni over the 15th anniversary of his coronation and also Mr Hun Sen who won last year national election and continues to lead the Kingdom as prime minister.

Mr Medvedev also agreed to Mr Hun Sen’s requests for the Russian government to modernise the Khmer–Soviet Friendship Hospital in Phnom Penh and for more Russian investment in the Kingdom.

Last month, Foreign Affairs Minister Prak Sokhonn called on lending countries to the Kingdom to follow suit after the Czech Republic announced it was forgiving more than $3 million owed by the government in the 1980s.

“[Mr Sokhonn] expressed his gratitude to our Czech partner for cancelling the debt Cambodia previously owed the Czech Republic and also turning the debt into development aid,” a Foreign Affairs Ministry statement had said. “This is a good point that other countries should follow.”

Mr Hun Sen previously also has asked US President Donald Trump’s administration to reconsider cancelling $500 million in war debt, which started as a $274 million loan for food supplies to feed the country under Lon Nol’s government in the 1970s.

San Chey, executive director of the Affiliated Network for Social Accountability, yesterday welcomed the Russian government’s move to convert some of the debt into development aid.

“Some countries started to cancel or convert the debt that Cambodia owed in the past to become development and humanitarian aid, It is not a bad thing,” he said.

Sam Rainsy wanted posters on display along border with Thailand