Finishing second in the debate was ‘The Influential’, followed by ‘Girl-Units’ and ‘Magnified’ – after more than two months of competition running with 24 teams from different universities.

Giving opening remarks at the final round of debate competition, Sdeung Phearong, Women and Youth Empowerment programme manager of TI Cambodia, said a knowledge of national budget is crucial for everyone, especially youths. She stressed that it is the responsibility of every citizen to be in the know regarding the transparency and accountability of the government.

Literally, national revenue is public knowledge for everyone to find out in order to get more transparency in terms of national income and expenses. The main resource of the national revenue, in general, comes from the total taxes collected from individuals to payroll and corporate levels.

Ms Phearong added that within the competition programme, the young generation can find out more about national revenues and to build more self-knowledge to present their recommendations to improve the national coffers.

“The participation (of youth) on the topic (of national revenues) has urged young people to do more research on the national revenue and also allow the audiences to get enlightened through them,” she said. 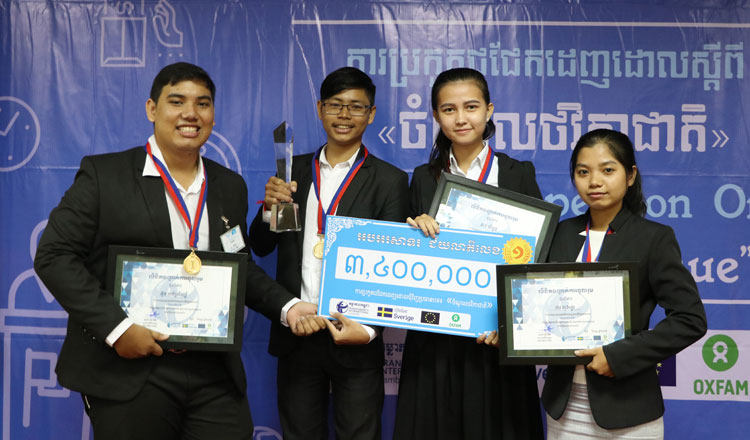 The statement released by TI Cambodia emphasized that the purpose of the debate is to strengthen youth participation in policy dialogues on fiscal issues in order to cultivate a distinctive youth voice. It also aims at providing a platform for students to discuss and debate on various issues concerning national revenues in the country.

Thav Songhour, from winning team ‘Monivadh’ (pic above) said he found out that people still view the national revenues issue as the sole obligation of taxation officials. He added that after doing research for this topic, he found different perspectives on national revenues. Aside from how to pay the tax, he said, people should find out the advantage of the tax benefits they get later.

Prak Vandeth, official of the General Department of Budget in the Ministry of Economy and Finance said that now everyone can find information on the national revenues more conveniently than before as the information has been shared online and with free access to everybody. He also applauded the winning team for using the official data and information as their references.

“Some updated official reports regarding to national budget can be found on the website of Ministry of Economy and Finance, and other reliable organisations like the International Monetary Fund (IMF),” said Mr Vandeth.

He said that the knowledge that the competitive teams have raised in their debate has been made public, and will inspire other people in general and others of the young generation to learn more about the flow of national revenue and expenses.

Drawing out kiddie talents at One Park

Disabled youths have to upskill to match job demands