EAR-SHATTERING news from Thailand, coming from the last human drama to save teenagers from a submerged labyrinth of caves that made world headlines last year. Just days ago, 11 elephants fell to their death at a notorious fall known as Hell’s Fall or ‘Haew Narok’ at the Khao Yai National Park (300 wild elephants in the park) in central Thailand. The Hell’s Fall theory is that the gentle giants were trying to save a baby elephant that slipped over the edge. Sadly, the dead elephants included a three-year-old calf, park officials said. “We understand the elephants were trying to cross over to the other side of the river,” local official Badin Chansrikam told Reuters news agency. “…one of the smaller elephants might have slid and the adult ones were trying to rescue them but were swept away by the water.” 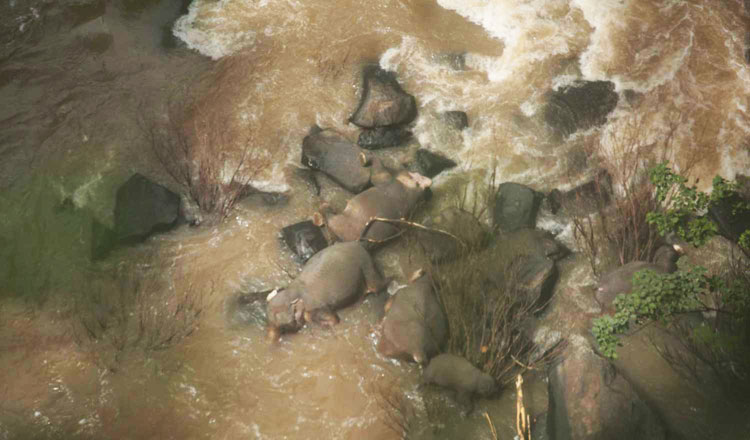 The incident could also take an emotional toll on the surviving elephants – which have been known to display grief. Dr Google says elephants have emotions: ‘They think humans are cute’ just like we think puppies are cute. Elephants have a complex hippocampus, part of the brain which is linked to emotion and there are cases of elephants suffering from post-traumatic stress disorder. According to the Bangkok Post, the new death toll makes it one of the biggest losses to Thailand’s elephant population in recent memory. Hell’s Fall has a history too: a herd of eight elephants died after falling in 1992 which caught national attention. Some 7,000 Asian elephants – half in the wild and half in captivity — remain in Thailand. Music to cheer you up for the weekend: listen to Henry Mancini’s ‘Baby Elephant Walk’ — dedicated to what must be the saddest baby elephant in Indochina now. Sob!