Anlong Veng, My Love, the song that besieged the last Khmer Rouge stronghold

The Documentation Centre of Cambodia in September produced the song Anlong Veng, My Love to document Cambodia’s struggle to reach reconciliation after the civil war. The Anlong Veng area was the last Khmer Rouge stronghold before its occupants surrendered to government forces in 1998. The song tells the story of a Khmer Rouge soldier – representing Anlong Veng – who laid down his arms for a beautiful woman representing the Kingdom.

DC-Cam director Youk Chhang sits in his office as he highlights the importance of the song Anlong Veng, My Love.

Mr Chhang says the soldier who gives up his arms in the song represents the stronghold of Anlong Veng.

“According to the song, Cambodians want to have reconciliation and want the government to fulfil its promises to the Anlong Veng area,” he says. “The government was supposed to preserve the area.”

“We wanted this song to reflect the sacrifices of former Khmer Rouge soldiers who are now ensuring peace for the country,” Mr Chhang says.

The Khmer Rouge is responsible for the deaths of an estimated 1.7 million people during the height of its rule in the 1975 to 1979.

Its guerilla forces began to steadily lose control of territories throughout the 1980s, but soldiers in Anlong Veng continued to fight well into the 1990s.

What was left of the Khmer Rouge forces finally signed the internationally-brokered Paris Peace Agreement on October 23, 1991, but peace did not come to fruition for Anglong Veng until 1998 when its leader Ta Mok surrendered to government forces.

Ta Mok was promptly arrested and tried by a military tribunal. He died in 2006 while in prison.

Anlong Veng residents, many of whom took part in violent acts, were given clemency in exchange for peace and preservation of the area by the government.

In 2006, as part of its preservation commitment, the government announced a list of areas in Anlong Veng to be designated as historical sites. It was not until 2010 that the papers were signed for the preservation.

The government later issued a sub-decree on how to preserve and develop Anlong Veng’s historical sites.

According to the Tourism Ministry, there are 14 designated historical tourism spots in the area which are divided into two zones.

However, despite the work done by the government, many living in the area are still struggling to find their place in society.

Sout Vechet, a 21-year-old from Anlong Veng, says he had to move to Phnom Penh last year to pursue a degree in administration and find a job.

“There is no university there. Although infrastructure has been developed over the years, most residents are farmers who live under the poverty line,” Mr Vechet says. “We feel we are different from other people in Cambodia because of our history.”

“These songs highlight history and I hope it will help us connect with the rest of society. I strongly believe people will listen,” he adds. “We hope to become one with people and no longer be isolated.”

Past atrocities are not easy to digest; the Kingdom today struggles with the by-products of its history.

Mr Chhang says his father was killed by the Khmer Rouge, but he, like any other citizen, wants reconciliation with the past and to move forward with the rest of the nation.

“Compared to speaking or writing a book, music is the best approach to reach an audience. It can capture the hearts of listeners quickly,” Mr Chhang says. “It’s more powerful than listening to someone speak or reading a book.”

He says Anlong Veng, My Love was produced to capture the hearts and souls of those who stayed in the last Khmer Rouge stronghold.

Dy Tharen, the 39-year-old vocalist for the song, says even though he was not born during the rule of the Khmer Rouge, the lyrics instantly resonated with him.

“I grasped the lyrics and my mood changed accordingly. I was not yet born, but I did it because of the melody and what I learned about the Khmer Rouge and the conflicts among Khmers,” Mr Tharen says. 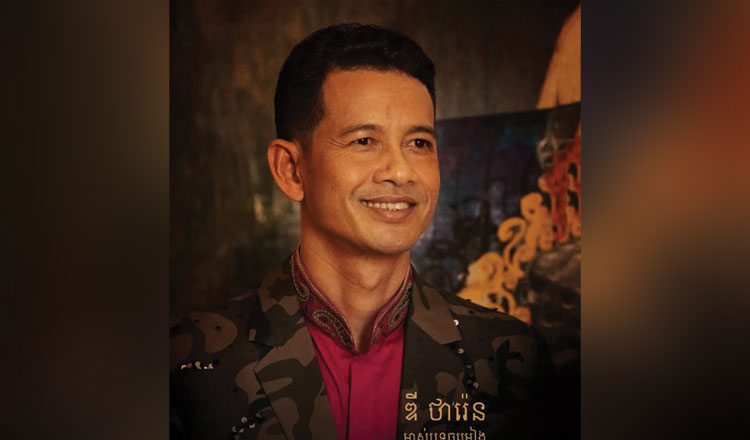 Sum Saroeun, the writer of Anlong Veng, My Love, says he wanted the lyrics to describe the dangers of Anlong Veng. Mr Saroeun says even though the area is surrounded by beautiful landscapes, landmines riddle many of its areas.

“I want everyone to think of people who were in the Democratic Kampuchea regime when they hear the words Anlong Veng,” Mr Saroeun says. “Those people were Khmer Rouge soldiers and their leaders.”

“If we do not speak out or remind people about this, they will completely forget,” he says. “I hope people would come and visit Anlong Veng to explore and learn about who Ta Mok [Anglong Veng Khmer Rouge commander] was back then.”

The song seems to have resonated well with the general public. It was shared on Facebook in September and it has been listened to at least 333,000 times and shared at least 3,000 times.

Mr Chhang, the DC-Cam director, says the song is so popular among Anlong Veng residents, it sparked a sequel entitled A Rainbow, No Love. It features female vocalist Sun Sreypich.

In A Rainbow, No Love, Ms Sreypich sings about a woman from Anlong Veng and a man who hails from a city. The woman feels it is god’s wish for her to be faithful to the man and the two fall in love.

The man then becomes a rainbow, but because of the rainy season, the rainbow moves on and leaves the woman behind.

Mr Chhang says the song is a metaphor for Anlong Veng’s struggle because the woman mentioned in the lyrics longed to be with the rainbow.

“It’s about the conflict between Khmers and Khmers. If we compare it to our society, [the woman] is the Khmer Rouge soldier and the man is [society],” he says.

Mr Chhang says many young people born in Anlong Veng still do not understand the importance of the area and what role it played throughout history, and that’s where songs like Anlong Veng, My Love and A Rainbow, No Love can be influential in pushing for change.

“These songs are meant to educate people on the historical struggle [in Anlong Veng] and inspire Cambodians, especially youths, to find different ways to break away from the past,” Mr Chhang says.

Education Minister calls for greater use of digital education