Crowned as Miss Grand Cambodia 2018, Dy Lika won instant recognition in the public’s eyes as she swept aside 75 other candidates to win the Grand Pageant’s Choice Award at Miss Grand International 2018 in Yangon. Now, everywhere that Dy Lika sashays, she wins admirers over with her stunning beauty, grace and intellect. Yet, nobody would have guessed that before she ascended the throne yearned by a nation of maidens, Dy Lika was once a mockery for her towering height, teased for her skin colour and ridiculed for her unfeminine cut. Her unsung story behind the stage is revealed in an exclusive interview with Kanika Som.

THIS is undoubtedly the transformation of a lifetime for Dy Lika. changing from ugly duckling in her schooldays into a graceful swan that no one thought possible.

“Never before has anyone known that I was bullied a lot when I was young. People used to tease my height and called me “a palm tree”. I am so tall, so my friends said I looked more like a man. People even predicted that I might not be able to find a partner in my whole life,” said Lika.

The sneers and chuckles in school made Lika more determined to turn her weaknesses into strength. In 2018, she became first runnerup and the feat paved the way for her to represent the Kingdom of Wonder on the international pageant stage – Miss Grand International 2018.

“It has never been easy for me as a country girl and coming to the city to study and chasing a new endeavour as a ‘Miss Grand’ was quite an astonishing journey. However, I had set my eyes on that dream since I was a child. I wanted to prove to people that beauty is not defined by a stereotype of the society or the opinion of other people,” shared Lika.

Dy Lika hails from Kampong Cham province where she finished Grade 12 in Krouch Chmar high school and moved to Phnom Penh, embarking on first job in a beauty salon. At the same time, she burned the midnight oil at a university for a BA degree.

For an unusually tall girl at 1.72cm, the lean Lika used to be mocked as a palm tree, Twiggy the world’s first famous skinny model, she always been wanted to turn her weakness into something she can proud of (a normal girl in Cambodia stands at around 1.60 metre). Then she decided to apply for the Miss Grand Cambodia pageant, where to her surprise, her height and skin colour totally matched the qualifications. On her journey of grooming to become Miss Grand Cambodia 2018, she started shaping up – vital stats of 34-29-36 — along with the other contestants — physically, intellectually and mentally. 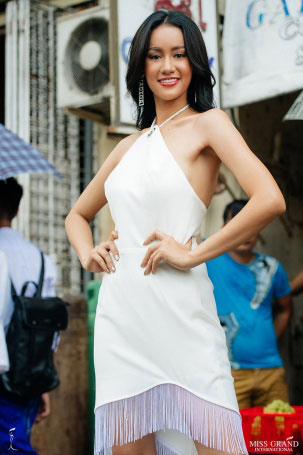 Dy Lika reached the final round of the competition although she was unable to bring home the highest crown for Cambodia, she said, “Being able to represent Cambodia and being one of the contestants standing on the same stage with other pageant beauties from around the world, is already a great achievement in life,” she rationalised.

By her own admission, she will forever look back to the day she represented her country Cambodia in the grandest way possible.

“The competition “Miss Grand International 2018” was held in Yangon, Myanmar for the first time and it was also the first time I went abroad. I was quite nervous as I went there alone and it was even more nerve wracking when I had to carry my responsibility to represent my country as Miss Grand Cambodia,” said the 21-year-old.

And even with the huge accountability of being an ambassador for the country, she said being resilient and challenging herself to think “outside the box” brought many new lessons learnt and a host of experience to improve herself as a person of stature and a beauty queen.

“Even though I might not be fluent in English, I learned a great deal about culture and traditions through basic communication. Despite the fact that we are all from different countries, we came here with the same goal, to represent our country,” She said.

“Every contestant has a story, a journey and struggle to be where they are standing now and that inspires me to work harder and to be proud of every journey I got through,” Lika added.

The crown has opened many doors in this beauty industry of bright lights. Lika’s life has been a showcase of undiscovered talents in the arts ranging from acting in TV drama, short films to shooting commercial videos.

“I was given the opportunity to act in movies as well as many commercial videos and sports. With all of these breaks, it is a great platform to showcase my capabilities and passion I have for my chosen field,” said Lika who is the second child in a family of four.

To all those young Khmer women who nurse the same dream, Lika said, “Hold on to a strong belief in yourself, people will have so many things to say about you. Some might use their opinions to unnerve you while some share their perspectives to support you. Whatever others say, you should be the first person to love your own self and believe that you can overcome any hardship to achieve your dream and what you think you deserve.”

What of the taunt that she would never be feminine enough to land a husband? The crowned jewel of Cambodia is currently focused.

Painting life and Beauty on the Boats