AS one of the most renowned education companies in the Kingdom, Mengly J. Quach Education (MJQE) is committed to ensuring that their graduates leave with more than just a certificate in hand.

According to its Founder, Chairman and Chief Executive Officer, Dr Mengly J. Quach, a school’s true success can only be measured by the quality of its students — this means impeccable academic performance, overall skills and social awareness.

Being a philanthropist himself, Dr Mengly is well-versed in the last area. That is why he has spearheaded various corporate social responsibility (CSR) efforts under the Mengly J. Quach Foundation.

“We try to get our students involved in most programmes. This somehow changes their mindset. Even after they graduate and leave MJQ schools, they will do more. We have had many former students at the forefront of most charity clubs in their respective universities.

“This is what makes MJQ schools special. We groom our students into becoming caring citizens. We produce high quality, empathetic students with a sense of responsibility towards the community,” he told Youth Today in a recent interview.

One of the most successful activities which have been going on for eight editions now is ‘Talents for a Cause’, where students from American Intercon Schools and Aii Language Centers put on a special talent show and the proceeds from ticket sales go directly to the MJQ Foundation.

“Aside from the foundation, proceeds also go to orphanages and underprivileged communities in the form of donations. We have also brought our students to shop for school supplies which later are donated to those in need. Our practice is very hands-on.

“The foundation has always been self-funded and this is challenging because with limited resources, there is only so much we could do. By organising events like Talents for a Cause, students will understand the role they can play to help the local community,” he elaborated.

This practice of giving-back has also been recently expanded to the 1,200 staff of MJQE, Dr Mengly added. Now, employees who wish to contribute can do so by deducting a small amount from their salary for charity purposes.

“The amounts deducted will go straight to fund the Foundation’s charity efforts. We don’t ask for big amounts — just $1 or $2 a month. So far we have had 264 staff who participated, which makes up for roughly 22 per cent of the entire workforce. We have collected roughly $683 a month and that’s a lot. We are very happy,” he said.

Being an advocate of community-centric efforts, Dr Mengly calls on other companies to follow in his footsteps. He added that such initiatives will not only help alleviate the burden of local communities, but will also indirectly boost a company’s reputation in the business sector.

“It is like killing multiple birds with one stone. Companies, big or small, make a living from the community so it is only fair that we give back. When you show appreciation towards the society, your branding, reputation and name will also improve.”

“You will gain more trust from fellow businesses, thus improving your chances at potential partnerships. Good business will attract more business,” he said.

Dr Mengly, however, believes that CSR efforts should always start with a company’s own employees before being extended to the outer community. This, he said, will also keep staff happy which subsequently equates to a low turnover rate.

“The Buddhists believe that before you pay respect at the temple, you must pay respect to your parents first. The same applies here.” 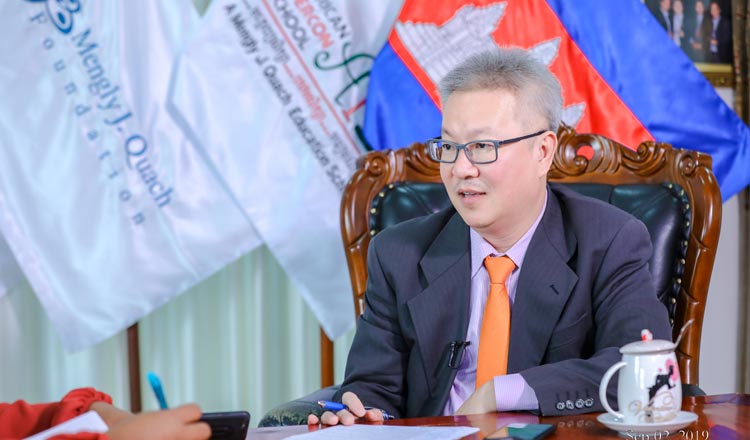 “How is your staff? How is their family and well-being? Are you paying them according to market value? Did you work them too hard? Did you provide them basic benefits like health insurance? These are fundamental questions employers should ask themselves.”

“By keeping employees happy, it’s a win-win situation. When turnover is low, there will be less recruitment and less training. It also means more productivity. It just makes perfect sense to start with your own staff,” he added.

Despite having done a number of charitable efforts since its inception in 2005, the foundation shows no sign of abating. To date, it has helped build one school in Kampong Chhnang and another in Kampong Cham, while two more are under construction in Pursat and Prey Veng.

“People don’t want to admit that we don’t have enough schools, but you can tell from the half-day programme that we lack resources. Otherwise, Cambodia would have full-day schools like other countries. But we cannot blame the government, they’re working hard on this.

“So we play our part by helping where we can. We had renovated and built two schools, currently working on two and there are 10 more on the waiting list. This is done under MJQ Public School Construction Project initiative.”

Dr Mengly explained that his foundation will continue to place a high priority on CSR efforts, adding that it has 23 projects under four programmes. They include Dr Quach Mobile Medical Clinic, MJQ Children’s Bikes for Education, MJQ Food Banking and MJQ Community Service Project.

“We do our best, despite the challenges. Previously, Cambodians were known to be charitable but our dark history has somehow turned us into self-centered people who only care for ourselves. We have to do something to bring about real changes. Let’s work together to help each other,” he said.

What next? Dilemma for students at crossroads