Since it was established in 2006, the UN-backed Khmer Rouge Tribunal is now slowly wrapping up their obligations, leading to concern over where its archives will be stored at the conclusion of the proceedings over Cambodia’s darkest hour.

As the UN-backed Khmer Rouge Tribunal wraps up its duties, questions have arisen over the preservation and maintenance of the court’s archives, including which institutions are qualified to store the valuable documents.

The Documentation Centre of Cambodia recently had BDLink agency study public opinion regarding the ongoings of the Extraordinary Chambers in the Courts of Cambodia to get a gauge of the public’s view over the issue.

So Farina, deputy director of DC-Cam, says the purpose of the study was to examine public opinion in relation to the archives of the ECCC.

She says the Khmer Rouge Tribunal was created to seek justice for the victims, therefore the preservation and maintenance of the ECCC’s archive must involve and include their voices.

Ms Farina added that the 95-page study regarding the archives of the ECCC will be presented in a book that will be published at the end of this month, noting that there is also a plan to present the contents both through online and offline platforms.

“DC-Cam has prepared both a Khmer and English version to make it more accessible to the public,” Ms Farina says. “We plan to launch it at the end of this month and invite relevant stakeholders to attend.”

She explains that since the UN is involved, it is understandable that the global organisation would keep the archives. However, she also expresses concern over the archives leaving Cambodia when the UN departs at the conclusion of the tribunal.

“This [study] project shows which institutions are chosen by the victims and the general public to keep the documents,” Ms Farina says.

She adds that Cambodians generally view that the archives must be maintained by a credible institution that is independent of any personal or political influences in order to prevent the contents from being altered, compromised, or demolished.

She notes that independence was important to ensure the integrity and security of the archives.

Ms Farina adds that DC-Cam did not conduct the study in order to remain independent, noting that some people also consider the institution to be qualified to store the ECCC’s archives.

She says BDLink agency is one of Cambodia’s leading research institutions and qualified to analyse public perception.

Ms Farina says the study drew mainly on quantitative data and complemented by qualitative data in order to gain a deeper insight, adding that it focused on respondents in highly populated areas, including Phnom Penh, as well as Prey Veng, Kandal, Battambang, and Kampong Cham provinces.

“Information was collected from respondents through face-to-face interviews using structured questionnaires tailored to the type of respondent interviewed, which included people from different categories such as the general public, survivors, former Khmer Rouge cadres, students, teachers, and key information interviews with experts,” she says.

“BDLink has made the book easy to understand,” she adds. “The first few pages include all the main points and illustrate the answers from the respondents.”

“The top four institutions that survey respondents would like to see store the ECCC’s archives are the National Library, DC-Cam, Hun Sen Library and the Library of the Ministry of Justice,” she notes.

Ms Farina says it is crucial for Cambodians to learn their history, including the Khmer Rouge regime.

“An individual ought to acknowledge both the good and bad within their history in order for them to be able to grow and become a better citizen and leader in the future,” Ms Farina says.

Youk Chhang, DC-Cam director, says a library is the best place to store the ECCC’s archives so that students can access the documents because a library is a crucial part of their education and research experience.

“A library represents freedom, it is neutral and independent,” Mr Chhang says. “Students need to be free to learn rather than being brainwashed from such an early age by any institution.”

“Institutions in Cambodia have political attachment or influence, no matter what,” he adds.

Ros Sampeou, a victim of the Khmer Rouge and also head of DC-Cam’s archives, says that the ECCC’s archives is considered to be a compensation to Khmer Rouge victims and the general public. He adds that the documents are a rich source of education material useful for later generations.

“We want people to have free access to ECCC’s archives without any restriction,” Mr Sampeou says.

He adds that DC-Cam has been collecting all related documents that the ECCC publishes since the very first day of the Khmer Rouge Tribunal, noting that the collection expands beyond confidential documents.

Chum Mey, 88, one of only a handful of survivors who were imprisoned in Security Prison 21, which is now known as the Tuol Sleng Museum, supported the results of BDLink’s study that noted the four locations to store the archives.

“We must respect the decision of the people in the sampling,” Mr Mey says. “The ECCC’s archives should be stored in various places to make it more accessible and to ensure that the documents will not be compromised or demolished.” 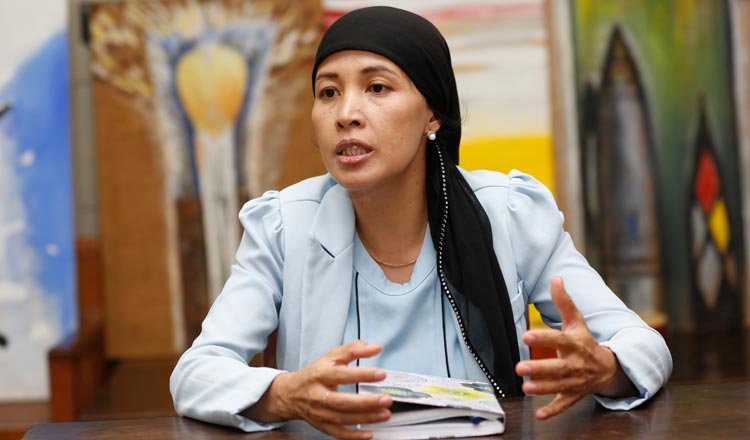 Mr Mey, a native from Prey Veng province, says the ECCC has brought justice for himself and his country. He notes that if the ECCC’s archives is available for the public, later generations will be able to access the documents in order to gain an in-depth knowledge about the processes from the tribunal.

Neth Pheaktra, spokesman for the tribunal, says that the fate of the ECCC’s archives following the end of the tribunal has been discussed in a number of meetings between Cambodian and UN officials, who will determine the outcome.

“When looking at the research methodologies [of the study], the survey itself is biased and lacks academic levity,” Mr Pheaktra says.

“It doesn’t reflect the reality of the facts, it contains a lot of leading questions and ignores one important institution, the Legal Documentation Centre, which is related to the ECCC, and which currently plays a crucial role in ensuring that the public has access to the ECCC’s archives.”

“This LDC is to store and preserve all court documents, both paper and electronic archives, by integrating with an electronic library that serve a purpose of study and research,” he adds.

Mr Pheaktra says that according to universal practices, all archives belong to the state for preservation as records and a legacy for the future generations.

Since it was established in 2006, three former Khmer Rouge regime leaders have been sentenced to life imprisonment by the court, including Kaing Guek Eav, alias Duch, who commanded the S-21 prison, former head of state Khieu Samphan and Nuon Chea, former deputy secretary of the Communist Party of Kampuchea who died last month.

Working group on cross-border drug crimes to be formed