Cambodia not a claimant state in South China Sea dispute

Cambodia is not a claimant state to the territorial dispute in the South China Sea and, as such, it can afford to have its own stance toward the issue.

Stating this exclusively to Khmer Times during a recent interview, Malaysian Prime Minister Mahathir Mohamad said: “Cambodia has to protect its own interest in some matters and its pro-China stance on the South China Sea dispute is understandable.”

“We should not be judging Cambodia’s stance from afar, although a united front on this dispute would be preferable,” he added. “It depends on the claimants and how they manage to convince Cambodia to back their cause.”

There are at least four claimant states to the disputed territories, which are reportedly rich in natural resources, especially oil and gas.

Mr Mahathir said that some claimants were much closer to the dispute because of their proximity and, as such, had much stronger views compared with Cambodia.

“Although Asean generally operates on the principle, spirit and concept of consensus, when it comes to national interest, individualism will take over and this has to be accepted and understood by fellow members,” he said.

Mr Mahathir added that Asean has a policy of non-interference in the internal affairs of member states, as well as opposing interference from nations outside the 10-nation group into the domestic affairs of its member states. It was, nevertheless, important to note that this cannot always be the case. 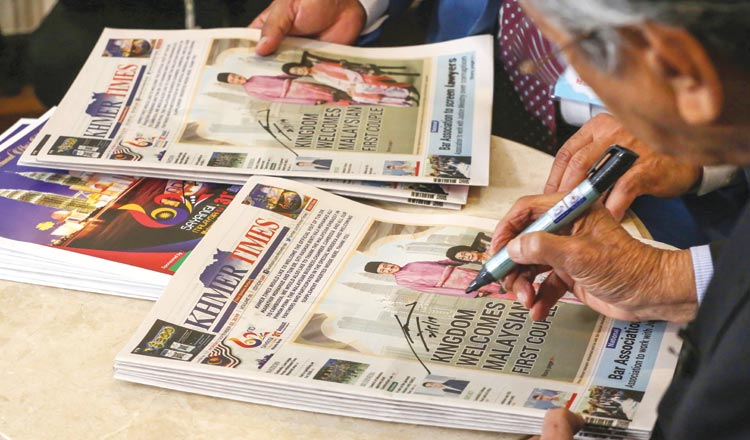 “Non-interference is the preferred scenario. However, in the case of Cambodia several decades ago, the immense suffering and pain of the people during the Khmer Rouge, could not go unheard by Asean member states or the world at large, especially the superpowers who waged a proxy war in the region, and nor could we or they remain silent,” he said.

“The same applies to the terrible suffering and persecution being faced by the Rohingya in Myanmar and the thousands who have been displaced from their homeland. We cannot choose to remain silent on this issue and neither can the world at large,” he added.

He said that given these two examples, exceptions had to be made to the Asean principle of non-interference in domestic affairs of member nations or the spirit of consensus.

“Preferably, we as Asean should approach these issues on a united front,” he said. “However, sometimes such a consensus is difficult to obtain, as seen by certain actions in recent years.”

Mr Mahathir added in the case of Cambodia, its stance towards China is understandable as it is about national interest and economic needs.

“What Cambodia feels is good for her may not be in line with others elsewhere,” he said. “It should be respected as it is the decision of a sovereign state and should not be dictated to all the time.”

In a wide-ranging interview held soon after he arrived in Phnom Penh on September 2, Mr Mahathir remarked that Cambodia has grown tremendously since his first official visit more than 25 years ago.

“There has been a great deal of change, certainly in Phnom Penh. I don’t know about other parts. The city has grown very fast. Now we have all the modern buildings. I still remember the first time I came here was when I was Prime Minister before and, at that time, there were elephants on the road. Now there are lots of motorcars here and there is an obvious increase in prosperity in Cambodia,” he said.

Mr Mahathir added that he still believed in helping to bring prosperity to all of Malaysia’s neighbours because “when neighbours are prosperous, they don’t cause many problems. Otherwise, people might want to migrate.”

“Of course, when neighbours are prosperous, they make good trading partners. So, to the extent that we can help any country, neighbours in particular, to become prosperous, that will remain Malaysia’s policy,” the premier said.

He added that while Cambodia itself wants to grow, to become more prosperous, to become an Asian tiger or to become fully developed, it needs to pass through different phases just like Malaysia did.

“The challenge now is to build human resources and capacity and capitalise on its strengths, which Cambodia has aplenty and chart her course and destiny,” he said.