Cambodia will feel hard done by after the Angkor Warriors were held to a 1-1 draw by Hong Kong in yesterday’s Asian Qualification group stage matchup in Phnom Penh.

Despite a strong start to their FIFA World Cup Qatar 2022 & Asian Cup 2023 preliminary group stage opener, the hosts fell behind after just 15 minutes in front of a capacity crowd at the 60,000 capacity Olympic Stadium. Hong Kong’s Chun Lok Tan evaded the defensive pairing of Captain Soeuy Visal and Sareth Krya to deliver the opener beyond the fingertips of Cambodia keeper Keo Soksela.

However, a little over 15 minutes later, Cambodia were back on level terms as Keo Sokpheng got on the end of a superbly weighted through ball from Sath Rosib to guide the ball beyond Hong Kong keeper Yapp Hung Fai.

Hoping to inject some pace up front in the second period, Honda and Dalmas hauled off Phallin and introduced 16-year old prodigy Sieng Chanthea. However, it was Suhana who fluffed his lines in front of goal after being gifted a gilt-edged chance by Orn Chanpolin. Unfortunately for Suhana, he failed to control the ball and the visiting defender gratefully cleared the danger. Cambodia came closest to a winner in the 74th minute as Chanthea, after a mazy run into the opposition box that brought the crowd to its feet, curled a right footed effort towards goal but the ball cannoned off the upright and on to safety. 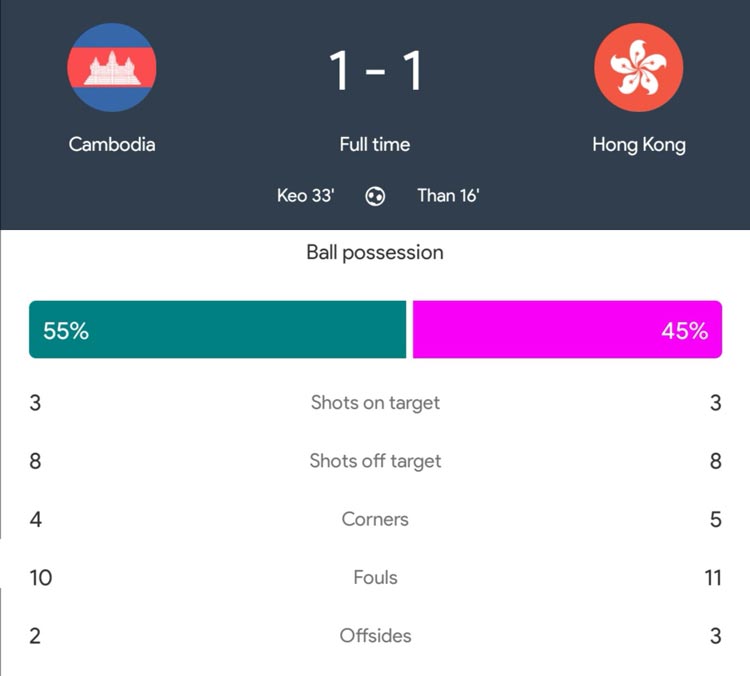 Cambodia continued to have the better of the chances but both Rosib and Suhana could not net a winner.

In other Asean action at press time, Myanmar were beaten 1-0 by Mongolia in their opening game of the qualifiers falling to a 17th minute strike from Dolgoon Amaraa against the run of play. In Group A, Philippines fell 5-2 to Syria, while Group D saw Singapore draw 2-2 with Yemen.