Home - Hope in sight for the scarred

Hope in sight for the scarred

An acid attack 12 years ago scarred a Cambodian woman badly. It not only took away her beauty, it also took away her sight, her ability to work, her home and worst of all, her family. For years, she then lived a near-hermit life in hiding because society feared her hideous appearance of a ghostly face. In utter despair though she was, the woman never gave up hope and put up a brave front to fend for her daughter, also deformed by the cruel act at age three. This sad tale now has a happy ending in sight, writes Taing Rinith.

THERE is no way a woman can know when fortune smiles or when misfortune knocks and turn her world upside down. Yet, Chea Chenda, a typical post war-era Cambodian housewife, never expected such a cruel destiny as she has always been kind and following the teachings of Buddha, never mistreating a soul. Then one Saturday, she was called on to be courageous.

In February 2008, Chenda, then 32, was visiting her in-laws in Phnom Penh’s Prek Toal Village with her youngest daughter Neang Malita, then just two years old. That weekend, an unknown man called her and asked for her whereabouts. He had befriended her a few days earlier when he “dialled a wrong number” but duly struck up a conversation.

He offered to become her ‘foster brother’, to which Chenda agreed out of typical Khmer goodwill as the man strangely knew of her younger brother’s demise to illness recently. She unsuspectingly disclosed her whereabouts as she saw no ill-will afoot.

On her way home, Chenda was astride her motorbike with the tiny baby Malita huddled in front of her. After a few minutes, she heard a man repeatedly calling from behind on his bike. She first ignored him, but he was persistent to the point of annoyance. So she turned to him and lifted the visor of her helmet to see what he wanted so badly. Before she could speak, he splashed a bottle of liquid into her face.

The liquid burned her skin and eyes, inflicting the greatest pain Chenda had ever felt in her life. She fell and writhed in agony. Despite the unbearable pain, she could hear Malita crying out. Did my baby get burnt too?! As people nearby rushed to her aid, one shouted, “Oh, my gosh! This is liquid acid!”

It was the realisation of that horror, not the searing pain anymore, that saw her blacking out.

“It was the worst day of my life,” Chenda, now 44, told GT2 in an interview. “Why someone had to hurt me like that? I never wronged anyone. And why did they hurt my daughter as well?”

After the attack, doctors rated Chenda with only a 20 percent chance of survival, but her husband, a businessman, sent her to Vietnam for treatment. She was saved but lost nearly all else — blinded in both eyes and her body badly deformed. Worse, the medical bills had eaten up all their wealth, including their beloved home and put the family into debt.

A little after, Chenda’s husband went on a business trip. He never was to come back.

Soon, Chenda found herself unable to feed her three children alone so she had no choice but gave up two of them to relatives in Kampong Cham while she and Malita, her youngest daughter, went to live in a shelter provided by an NGO that supports acid attack victims.

“I did not know whether my attackers have been arrested or not,” Chenda says today. “I know nothing at all about the police work. But I hope they, and all acid attackers, get a life sentence they deserve.”

For nearly four years, Chenda barricaded herself in her room. Living in darkness, not wanting anyone to see her deformity.

“Sometimes, my young daughter come to me crying, saying other children called her ‘ghost-face’,” she related, close to tears.

“I told Malita to think positively. I also assured her that it was outside appearance but it is the heart that matters. Inside, I said you are a beautiful girl.”

Whenever Chenda was haunted by terrible memories, as a devoted Buddhist, she kept telling herself that it was bad karma from a previous life. She says if she had not upheld that idea, she might have committed suicide a long time ago. It was like payback time.

When Malita turned six, she kept tugging at her mother “to go to school”. Unable to send her daughter to school on their own, Chenda tried to find an NGO that supports underprivileged children’s education. Then she was told about Cambodian Children’s Fund (CCF), founded by Scott Neeson, the former President of 20th Century Fox International. Later, she asked someone to relay her message to the organisation, asking it to give her daughter a place at its Neeson Crip Academy, as well as for a job.

“My relatives at that time said I was out of my mind to ask for a job,” Chenda says. “But I want to restart my life. I want to support my children again even if it means washing dishes the rest of my life.”

But Scott was more than helpful when he met them. He not only accepted Malita into his academy and offer Chenda a job in CCF’s rice workshop, he would also support them with financial assistance and gave them accommodation in one of CCF’s World Housing communities in Streung Meanchey.

“Malita was a poor girl,” Scott says. “She has been locked in a house with her mother for two to three years. But she did not want to be alone.”

“I have watched Malita grow and begin to thrive. During that time, she has had to undergo painful treatments and her courage has been remarkable.”

Malita, now 14, was not as traumatised by the incident as her mother because she was too young at that time. Despite suffering extensive burns to her body, particularly her face and arms, Malita says she feels as if her deformity was from birth.

“None of my friends discriminate against me today,” Malita says. “Many people are helping me, and I don’t feel lonely at all.” 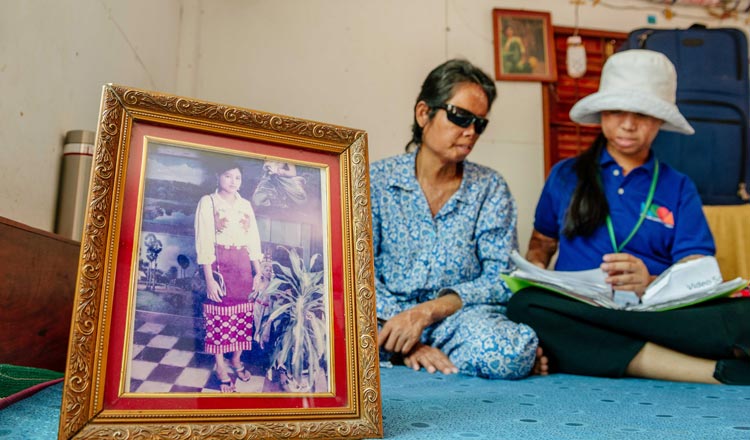 In July this year, Debora Alessi, the Founder and CEO of Face Forward International, another humanitarian NGO, flew to Phnom Penh to meet Chenda and Malita at CCF. Alessi said her organisation will offer them reconstructive surgery in the US. The treatments, from “Los Angeles-based specialist surgeons, will take about five years and cost around 300,000 dollars.

“After receiving the news, I felt like I was born again,” Chenda says. “After the doctor examined me, they told me the sight in my left eye may be restored.”

“I don’t expect my body to be as pretty as before the attack, but this would be the greatest thing ever happening in our life.”

However, Deborah Alessi, who learned about the two from an acquaintance of Scott’s in the US, said the honour belonged to her.

“I was so personally inspired by the incredible work of Scott and his team with the children and families they serve,” she says.

“Malita is a brave and wonderful young girl. Face Forward will begin their reconstructive surgery this summer and together our teams will support Malita and her mum as they continue their healing journeys and look to a bright future ahead.”

Malita is looking forward to the treatment, as well as her first step outside of the country.

“I don’t know how to describe this feeling,” Malita says, with eyes sparkling. “Scott even said he would bring me to see a studio in Hollywood.”

Malita is doing well at school. Just passed Grade 9 in the National Exam, she wants to go to a film school and become a film director.

Meanwhile, her mother Chenda is happy as long as her daughter can continue her studies, but she also asked her to share her love and care with the future generations.

“Whatever Malita will be in the future, I want her to come back to the organisation (CCF) and assist Scott in helping the children,” Chenda says, again almost breaking into tears. “I want her to help others, just like other people have been helping us.”

Howe — Her Sounds an exhibition of Cambodia’s women artistes