Home - Colours and the flag are above all else, says defiant Dalmas

Colours and the flag are above all else, says defiant Dalmas

Cambodia get their World Cup qualification bid underway this evening when they host Hong Kong in the Group C opener of their FIFA World Cup Qatar 2022 and AFC Asian Cup China 2023 second round campaign.

With a freshly pared-down squad of 25, head coach Felix G. Dalmas came out once again defending his football philosophy at yesterday’s press conference alongside his Hong Kong counterpart Mixu Paatelainen.

“Like I said last time, we consider all players and what they do both on and off the field, said the Argentinian. “I also said I hope he [Vathanaka] can be part of the squad, maybe in future games or the next game. But right now, there are many players that are doing very well. I also explained that it’s a group. So, it’s the group which is important to us.”

“We want and need players that are committed, who want to be here and have passion to play for the team, he added. “The players we have selected, from the initial 35 to the 25 or 23 we have now, they all share this common denominator.”

“[Team] colours and the flag are above all else,” he concluded.

Despite gambling on omitting the star trio, Sieng Chanthea, just 16-years old, has been called up after good displays for the youth side. He became Cambodia’s youngest-ever scorer in their first-round win over Pakistan. Regulars also set to feature tonight include Visakha’s wily forward Keo Sokpheng, midfield mainstay Kouch Sokumpheak, and defensive rock Soeuy Visal. They remain the more experienced members of the squad in an otherwise youthful squad picked with an eye on December’s Manila SEA Games.

Hong Kong missed out on the AFC Asian Cup UAE 2019 but their recent form – which saw them qualify for the 2019 EAFF E-1 Football Championship – will give them confidence in a tough group.

However, Finnish head coach Paatelainen believes that while Cambodia can prove to be a tough test, this would only make his own side more eager to get a result.

“Cambodia away is not easy at all,” he said. “They’ve been together a wee while and they pass the ball well and they’re a really good unit, so that will be a test on its own, never mind Iran in our next game and then Iraq and Bahrain. I’m looking forward to these tough matches and I’m looking towards the future.”

The Angkor Warriors have not fared well in encounters against Hong Kong stretching back to the Merdeka Tournament in August 1957. There, Hong Kong defeated the kingdom 6-2 before recording four successive wins in each meeting since.

Their last clash, a 2016 International friendly at the Olympic Stadium, saw Cambodia put to the sword in a 2-0 defeat – a mere month after registering a 4-2 defeat in Hong Kong.

Then under the stewardship of Korean Lee Tae-hoon, Cambodia’s fans saw the visitors plunder two goals came in an open first half. Brazilian-born Sandro opened the deadlock, delivering a header to put the visitors ahead before Nigerian-born Alex Tayo Akande then made it two after smashing the ball home following superb work from teammate Andy Russell midway through the half.

General manager Honda will lead the national team for their group matches having recently ended his spell as a player of Melbourne Victory in the Australian A-League. He will be eager for an improvement over their 2018 World Cup qualifying bid where they slumped to eight defeats in eight games, conceding 27 goals in the process. Led by Tae-hoon, they scored just once through Sos Suhana in a 2-1 loss to Singapore. With 0 points, they finished rock bottom of Group E below Afghanistan.

In this year’s competition, the eight group winners and four best runners-up will advance to the AFC Asian Cup China 2023 Finals and the final round of qualifying for the 2022 FIFA World Cup Qatar.

However, should Qatar – who have already qualified as hosts – win their group, the seven other group winners and five best second-placed sides will advance to the final round of qualifying for the 2022 FIFA World Cup.

The same applies should Qatar finish as one of the four best second-placed teams, with the fifth best group runners-up advancing to the third round of the Asian Qualifiers.

The next best 24 teams from the second round of the Asian Qualifiers will compete in a separate competition for the remaining 12 slots in the 24-team AFC Asian Cup China 2023.

In the other group C match of the evening, Bahrain host Iraq in a tasty encounter. 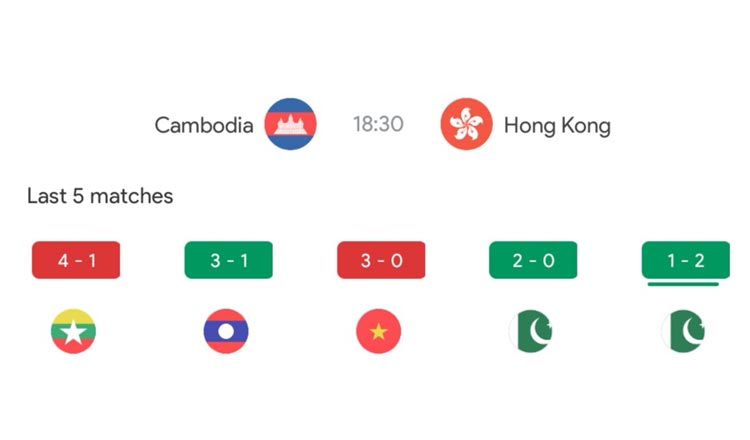 Solskjaer responsible if United do not compete for title: Matic