Phnom Penh Municipal Court yesterday convicted Lay Vannak to 13 years in prison after he was found guilty of killing his mistress and covering it up as a suicide in 2018.

Mr Vannak, the former Takeo provincial governor, was convicted along with his brother Lay Narith, the former deputy chief of provincial police who received 10 years in prison for his role in the murder.

Two other people were also convicted. Men Samay, Mr Vannak’s driver, and Choeum Vuth, husband of the victim’s maid Chan Ry, were each sentenced to two years in prison after the court found them guilty of concealing evidence.

“Based on the trial […], the Judges Council of Phnom Penh Municipal Court finds the four accused guilty,” Presiding Judge Ham Mengse said. “The court sentences Lay Vannak to 13 years in prison and Lay Narith to 10 years in prison. Men Samay and Chim Vuth are both sentenced to two years in prison each.”

Judge Mengse noted that all four have a month to appeal if they do not agree with the ruling.

The body of Chev Sovathana, a former National Assembly staffer, was found hanging in her room on January 26, 2018, at her home in Daun Keo city’s Roka commune.

According to Judge Mengse, all four were arrested in April last year in connection to Ms Sovathana’s murder.

Outside the courtroom yesterday, Mr Vannak and Mr Narith said the verdict was unjust.

Mr Vannak said the victim hung herself in her room because she was angry he had a second girlfriend.

He said that they will ask the Appeal Court to review their case, drop the conviction and release them from prison. 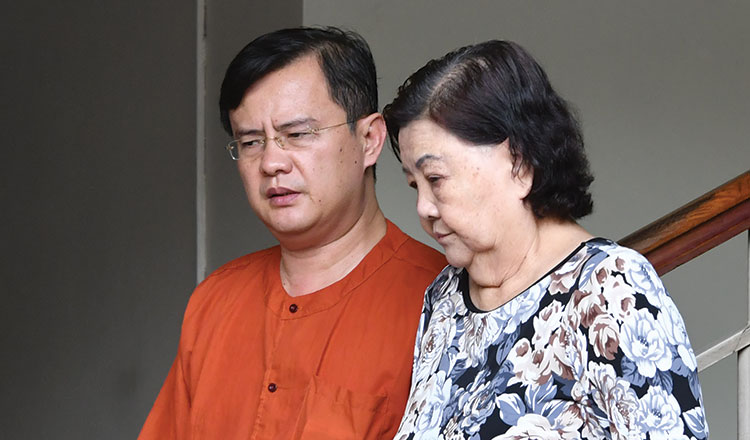 “It’s an injustice because I did not kill the victim – I did not do what they accused me and convicted me of,” Mr Vannak said. “I will appeal to the Appeal Court. The victim committed suicide.”

Mr Samay said he also does not agree with the ruling.

He said that after he was arrested in April, penal police at the Interior Ministry tortured him for a confession.

“I think the ruling to convict and sentence me to two years in prison was unjust because I did not commit what they accused me of,” Mr Samay said, adding that he will consider his next move. “I have no idea whether I will appeal or not because I have already been jailed for two years. I think it was bad luck, I might not appeal.”

Mr Sophal said the duo ordered Mr Samay, Mr Vuth and his wife Chan Ry to hang the victim’s body in her room to make it appear as though she killed herself.

“According to the confessions of Men Samay, Chim Vuth and Chan Ry, the four were linked to the murder of Chev Sovathana,” he said.