That’s how this ‘beauty with brains’ started out as a model, then an executive and actress too

You might recognize Keo Chansonin (pic) from TV and the movies: acting in the ‘Viplas’ film as a mentally ill character, ‘Oun Sas Ey’ from KlapYaHandz, or gracing the front cover of numerous local magazines and short stories on online VDO platform ‘Soyo Cambodia’.

More than that, Ms Keo Chansonin was a scholarship awardee and now holds a steady job as Brand Executive with an international Food & Beverage company while modelling keeps her busy.

What you don’t know about her is that her string of successes started on the stranger side of life, dealing with the same insecurities many of us have.

When Ms Chansonin turned teenager, she recalls that in Grade 10 she was already cutting a pretty tall figure at 170cm. Towering over her schoolmates and being dark-skinned did evoke some envy and snide remarks.

“Because I am darker skin-toned and very tall, students my age did not really want to befriend me. Sometimes they call me a lanky, plain Jane (but) I don’t begrudge the chatter. Instead, I focused on building self-confidence to prove to society that beauty is not always the (biggest) deal in your life.”

Despite the occasional teaser, Ms Chansonin used her imposing built to advantage after watching the American Top Model programme. She was inspired to become as ambitious as ‘Tyra Banks’.

“When watching that programme, I really felt connected with Tyra Banks. I felt society stereotyped darker-skinned people and Tyra Banks had to struggle a great deal to change perceptions due to her skin tone and a packed physique. Now she is a very successful supermodel. So why couldn’t I be one too?”

So when Ms Chansonin finished high school, she transformed her desire into reality by stepping into a modelling academy, despite family flak.

“My parents always tilted at me: ‘Why you want to be a model? It is not good to flaunt yourself in a sexy fashion.’ Hearing those unflattering words, I am always conscious about proving a point no matter if it is my studies or career.”

Though Ms Chansonin’s time is mostly scheduled by modelling and fashion shows, she has not lost her bearings on an academic portfolio. No matter what career, she emphasised that having knowledge is the fundamental core to progress to a secure future. 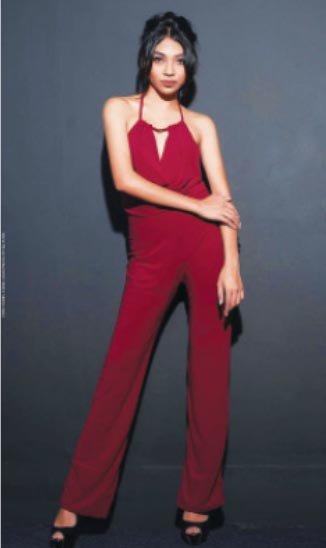 She added, “Though I really love being a fashion model, I still think knowledge plays a huge part in leading to success. Besides modelling, I go to classes and sincerely study. And that is what I have proven to my parents. I got a scholarship and now I have a decent job.”

Ms Chansonin speaks of some other common challenges. “This job requires a lot of patience. And it is painful with high heels on for long hours. But I have to exude confidence with my wardrobe and makeup.”

A few years later, she took another step – becoming an actress. Soon she acted in some well-known productions on both short and full-length films as well as music videos.

“I thought there are other things I could do, so I stepped up to become an actress. I trained for three months to cast the character of an unsound character in the ‘Viplas’ film. I finally did it. So, there is nothing more than being patient and trying again. And again.”

As Ms Chansonin is recognised as a veteran model in the catwalk industry, she has faced a lot of stereotypes. “When models are asked to wear sexy dresses, they have to say yes or no. To me, I have my own limit. Nonetheless, sexy dresses are part and parcel of the arts and it does not convey a wrong message. This career incorporates artistic skill, good taste and knowledge.”

Being a public figure, she articulates: “Be an influencer as well as an artist, I think it is important to limit ourselves on social media. Whatever I share or post, I think beforehand about its content whether it will benefit society or not. Models are not only influencers, but also brand representative for companies and products. So personality and self-discipline play an inevitable part in a modelling career.”

Ultimately, Ms Chansonin recommends the young generation (or model aspirants) that they should prioritise knowledge as it will put them on solid footing to work with people in global trends and additionally, they can have other career options besides modelling.

Angkorian Warrior who bleeds for nation