Home - A love story in song

A love story in song

Things have changed. When I first moved to Cambodia this week 11 years ago, knowing even less than the little I know now, I found it hard to find live music – when I did it was predominantly western. These days it’s not so difficult (see www.lengpleng.com), and there are a growing number of acts that play Cambodian music – particularly of the Golden Era in the 1960s – frequently with barangs contributing a certain western sensibility. One of these, the duo Arome Khmer, can be found performing Wednesday to Friday in the early evening at Hard Rock Café Phnom Penh.

Arome Khmer grew out of a love story. “After we got married, in 2014, and we were living together, I found out – oh, she sings very well”, says guitar player Michel Arich. “I learned one Khmer song to play with her, and then more and more.”

“I always liked to sing,” says singer Eav Sreytouch. “When he heard me sing he said he would like to learn to play Khmer songs.”

Their first tentative steps as a duo were out doing the open mics. “The first open mic we tried was at the Alley Cat [now Tacos Kokopelli], we started there,” she says. “And then [now closed] Slur Bar.”

Now, four or five years down the road, they have an impressive list of venues they’ve played and around 70 songs. The duo has developed into a charming act, often experimenting with expanding the group, adding bass and drums, but these line-ups have proved transitory. More recently they have worked with a more traditional Khmer ensemble, adding tro (a Cambodian bowed string instrument), roneet (bamboo xylophone) and percussion, as well as continuing to perform as the core duo.

At first, Sreytouch found it difficult to speak over the microphone and was hesitant to dance. “When I first was singing, I was very shy. Now I do more speaking, more action. Now I feel [I want] to make everybody happy, want them to join with me. And when they are happy, I never feel tired.”

Sreytouch was born in Takeo, but has lived in Phnom Penh for the last ten years. Michel, born and raised in Paris, first came to Cambodia in 2008 and quickly fell in love with the country and its people. They both love the old Golden Era Cambodian music. “I like the old songs, Ros Sereysothea, Pen Ron,” explains Sreytouch. “They never die, their voices never die. Even the new generation, they still listen. But the new songs, after just one year they are forgotten.”

The style lives on: rather than just repeat the same songs, they are nurturing their own compositions. “I have written some songs,” says Sreytouch. “There is one called I Feel Good, and one called Rom Jam Soniya, a little bit like Madison style.” There are plans for recording but unfortunately we will have to wait. “Recording takes a long time,” says Michel. 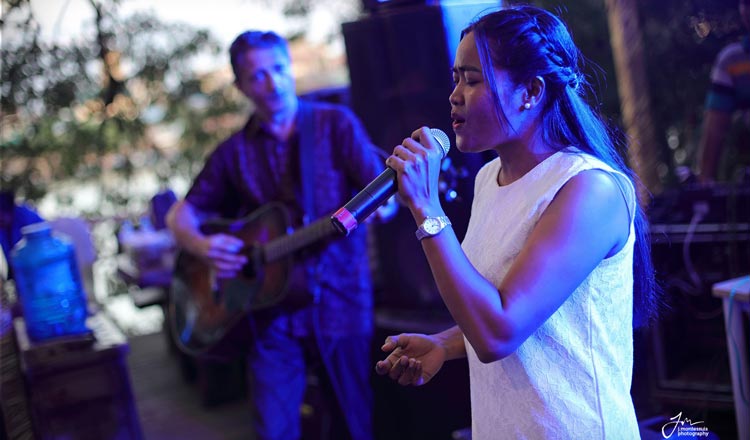 The discovery of a linguistic misunderstanding earlier this year led to a change of name: they were originally Aram Khmer, but, as Michel explains, nobody understood what it meant. “We made a mistake with the spelling, and then it wasn’t easy to change. Now it’s Arome Khmer, Khmer feeling, and that’s also better for the French, it’s a bit like Khmer aroma.”

Having that language crossover is certainly helping. They largely play to audiences that are around half barang and half Khmer. “The people who come to see us are very mixed,” says Michel. “The Khmer people like us because Sreytouch sings very similar to the old singers.”