The chapei dong veng – chapei for short – is a Cambodian two-stringed lute, played somewhat like a guitar, with one string playing the melody while the other supplies a drone. The overall impression for a foreigner is that it is not dissimilar to the rural blues of the American south.

Colin introduced the performance with a description of his first encounter with this music in London in the 1960s. “There was a legendary DJ named John Peel who broadcast a pirate radio programme called “The Perfumed Garden”, an outlet for the music of the UK Underground scene, and featured blues, folk and psychedelic rock. John Peel unashamedly played anything that other conventional DJs would never touch, and I listened to all his broadcasts. I remember two pieces in particular that he played. Blind Willie Johnson’s “John The Revelator”, and then a piece of instrumental music which he introduced simply with: “This is from Cambodia”. I had no idea what I was listening to then, but it blew me away! I knew nothing about Cambodia. Many years later I found out that what I had heard was chapei music.”

“Traditional Instruments of Cambodia”, a UNESCO publication from 1994, describes the chapei dang veng as belonging “to the Aareak (religious and healing) and Aapeapipea (wedding) orchestras. In addition, the chapei also performs solo in accompaniment of poetry, narrated stories, vocal duets of an argumentative style and riddle-telling – a special feature of the instrument which has brought it great popularity from early times right up to the present day.”It goes on to note the very specific construction of an instrument. “Wood must be selected which has a good resonance in order to hold the attention of the listener, and the spirits.” One modification that Sokim has embraced is the attachment of an electronic pick-up amplification system, to overcome the issues of interacting with modern sound systems. “I had a very bad experience with a concert at a high school, and the sound engineer could not find any appliance that fixed to the instrument. But later on we made the invention. Just one workshop in Phnom Penh that can do it.”

A strong and attentive audience, healthily mixed, heard a selection of pieces, mostly traditional wedding music; beginning with a welcome for the spirits and the ancestors. “This is a very important song, and we have to play it before we start the wedding ceremony,” Sokim explained to me later. “To have all the musicians alert that now the ceremony is starting, so it is time to be careful and concentrate.”

“We have a lot of songs for the wedding ceremony – 150 of them – and each song has a very specific role. Some songs are to call the spirits, and some songs to plead to the sky: do not rain today. Some songs are to educate the newlyweds on how to be a good family together, and how to pay respect to their parents. And another 20 songs just to entertain the guests.”

The set was completed with Colin joining on harmonica and then vocal, further drawing out the similarities to the blues, including a dance origination from near Laos, and a story song involving a flood, a village and a crocodile. 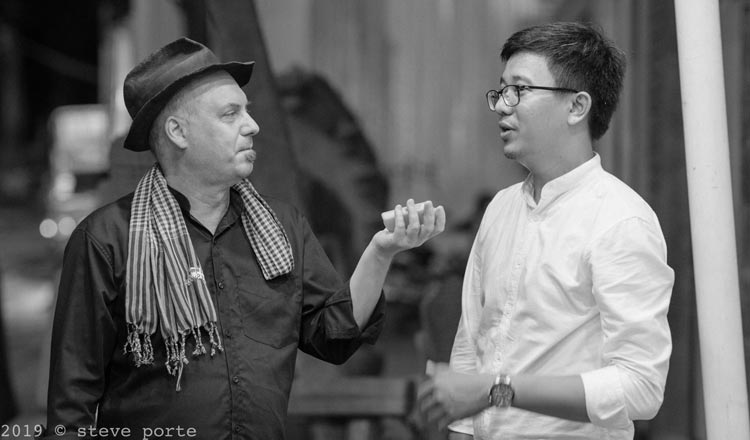 For many barang, the best known chapei player is Master Kong Nai, but Sokim told me of his favourite. “Another popular player, Prak Chhuon, passed away last year, just after we published a chapei book with the help of UNESCO. He’s also very famous and he has many fans, more popular than Kong Nai among the Buddhist monks and the old people, and also the young students, because his technique was so amazing. He sang and played, and his voice was very high – and the sweetness, the beautiful melodies he made, just amazing. He could play chapei solo and also in the spiritual orchestra or wedding orchestra. His approach was a mixture of classical, wedding, spiritual songs and chapei melodies together. That’s why no one else can do it.”

Sokim, who runs a music school outside Phnom Penh, has known Colin and Keiko for many years, but this was their first attempt to work together. “It was my first experience to do western music, and it’s also the first time I did an improvisation with him. Some parts it worked well, some parts it didn’t, .because of the scales and the tuning of different instruments from different cultures. It is good that we start to mix Cambodian traditional music with the western, to find how far it can go, that we can play beyond the tradition.”