The Cambodia International Debate & Public Speaking Championship Series (CamDEBATE) is a premiere platform for professional development in debate and public speaking in English. Underwritten by IDP Education, a world leader in international education and student placement, CamDEBATE aims to cultivate a healthy culture of dialogue and the sharing of different perspectives to foster understanding, friendship and knowledge among young people in Cambodia.

After months of competition, CamDEBATE now reaches its Final Round to name the champions for 2019. This event will take place at the Institute of Technology of Cambodia (ITC) on 11 August.

For this first year, CamDEBATE received more than 700 applications representing six different nationalities and more than 100 schools and universities. 529 contestants were selected to compete in the Audition Round on 9 June with 45 judges. The top 192 contestants then proceeded to the Elimination Round with 27 judges on 14 July, with the top 40 contesting the Semi-final Round on 28 July with 14 judges. This now leads to the top 20 finalists for the Final Round at ITC. CamDEBATE venue partner institutions for the previous rounds include American University of Phnom Penh, Paññāsāstra University​ of Cambodia, Norton University, CamEd Business School, Western University and the Australian Centre for Education (ACE).

For the Final Round, the top four debate teams and eight public speakers from the High School and University & Young Professionals levels will be competing for ten winning places. In the Debate Category, High School level, the topic is “The use of smart phones enhances learning and therefore should be encouraged in schools”. In the University & Young Professionals level, the topic is “Community service should be made mandatory in university”. Over 1,000 students, parents, and representatives of schools, universities, embassies and ministries are expected to witness the Final Round. 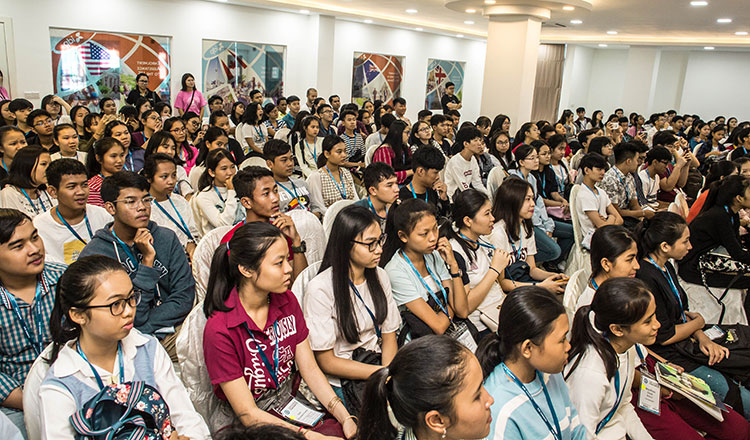 The winners will be announced by CamDEBATE’s distinguished judges, who consist of government and embassy officials and leaders in the business, education and NGO sectors, including HE Tina Redshaw, British Ambassador to Cambodia, HE Kem Gunawadh, Secretary of State, Ministry of Information, HE Youk Bunna, Secretary of State, Ministry of Civil Service and Director of the Royal School of Administration, Dr Eng Netra, CDRI, HE Chiv Ratha, Deputy Director General of Youth, Ministry of Education, Youth and Sport, Mr Erich Phillips, Executive Director, American Chamber of Commerce, Mr Ashley Irving, ACE Principal, Mr Tith Mab, IFL, and Ms Meloney Lindberg, Head of the Asia Foundation Cambodia, among other eminent judges. The winners will be awarded a 2019 champion’s medal, trophy, two-week study tour to the United Kingdom and other prizes. Tickets to the Final Round cost $10, which includes refreshments, lunch and entry into a lucky draw by CamDEBATE partners.

To learn more about CamDEBATE or for a ticket, go to www.CamDEBATE.org, CamDEBATE Facebook or call 023 222 325.