Government spokesman Phay Siphan yesterday slammed US diplomats working at its embassy in Phnom Penh, saying the diplomats comments were anything but diplomatic, uncalled for and urged them to leave if they could not accept the political situation in the Kingdom.

Mr Siphan’s comments follow a statement from the embassy on Tuesday, in which it renewed criticism of last year’s national election.

“Today, the US government notes the one-year anniversary of deeply flawed national elections in Cambodia. That vote was neither free nor fair, and it failed to represent the will of the Cambodian people,” the embassy said in a Facebook post.

Mr Siphan said Cambodia wants to maintain good relations with the US. However, he said the government has found working with “low level [embassy] officials” difficult.

“They do not have an ambassador yet, and it’s hard for us to work with petty officials who are not diplomatic and liked to make provocations,” he said. “We will not let you violate us, that’s our message. Those embassy officials, who are uncultured, must stop the incitement.”

“We are still friends,” Mr Siphan added. “If those officials do not like Cambodia, please pack up and leave. We do not welcome you.”

In response, US embassy spokeswoman Emily Zeeberg said: “We have no comment about this”.

Political analyst Em Sovannara yesterday said what Mr Siphan said was “serious”, noting it will not help improve relations with the United States. 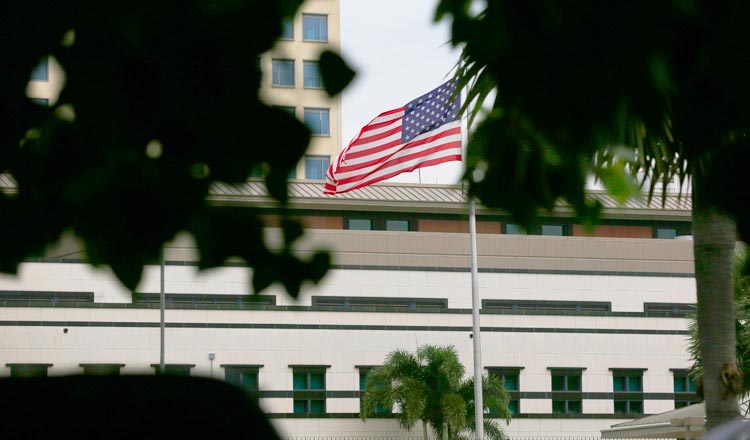 “I think it wasn’t a good thing; it was serious,” Mr Sovannara said. “We should not use harsh language when conducting diplomacy.”

“If we are not happy with their statement, we can file a diplomatic letter or summon the embassy officials,” he added.

On Wednesday, the Foreign Affairs Ministry issued a statement calling what the US embassy said “slanderous”.

“It is with great surprise and disappointment to note more undiplomatic and disrespectful behaviour by the United States embassy toward Cambodia as a host country,” it said. “The embassy spread misrepresented comments, openly attacking the integrity of Cambodia’s general elections in 2018.”

“Such a flagrantly offensive move…is least expected from the mission representing a civilised country,” it added.

The ministry also noted that despite repeated calls for a boycott, last year’s election had a high turnout of 83.02 percent.

“The election was hailed as peaceful, orderly, free and fair under the watchful eyes of tens of thousands of national and international observers,” it said. “The rejection of these basic facts is tantamount to an affront to the free will of the overwhelming majority of the Cambodian people.”